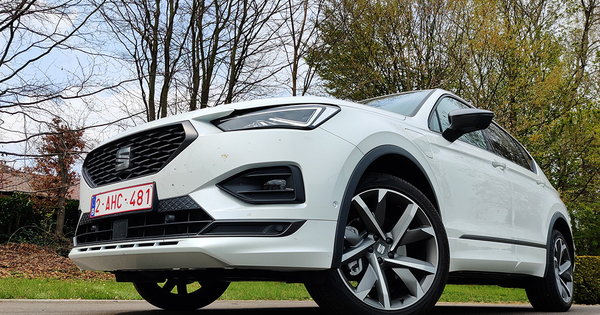 The plug-in hybrid powertrain that Volkswagen introduced at the time on the GTE versions of the Golf and the Passat is finding its way to more and more models of the VW group. In the Seat Tarraco e-Hybrid, the 1.4 liter turbo petrol, supported by an electric motor, develops a system output of 245 hp for a maximum torque of 400 Nm. That power is transferred to the front wheels by a robotized six-speed DSG transmission with a double clutch. The sprint from 0 to 100 km/h takes 7.5 seconds and the top speed is 205 km/h.

The electrical energy is stored in a rear-mounted lithium-ion battery pack with a capacity of 13 kWh. Count on 3.5 (3.6 kW via wallbox) to 5 hours (2.3 kW via a domestic system) to recharge the batteries of the plug-in hybrid SUV. These batteries ensure that the Seat Tarraco e-Hybrid has an electric driving range between 44 and 49 kilograms and an electric top speed of 140 km/h. The average standard consumption fluctuates between 1.6 and 2.1 liters per 100 kilometres, the CO2 equivalent of 37 and 47 grams per kilometer respectively – so neatly below the fiscally interesting 50 gram limit.

In anticipation of a less generously equipped and therefore cheaper Style, the Seat Tarraco e-Hybrid is only offered in combination with the more expensive equipment levels Xcellence and FR. This translates into extensive standard equipment, in the case of the FR also with a sporty finery of both the body and the interior. Only there is also a hefty price tag, because the plug-in hybrid SUV flirts with the limit of 50,000 euros. But there are tax incentives and low fuel consumption, if you have the necessary charging discipline.

As an e-Hybrid, the Seat Tarraco also proves to be a pleasant travel companion. Although you never have the impression that you are on the road with 245 horses and 400 Newton meters, the plug-in hybrid powertrain is alert and agile enough to commute smoothly and comfortably from point A to B. You feel the extra weight of the batteries on bad roads and when you drive a bit more enthusiastically, but it never gets unpleasant. The battery pack is quickly empty and the energy recovery has some difficulty in recharging the batteries on the way, so that the electric driving range is somewhat disappointing. Nevertheless, we concluded the test week with an average fuel consumption of 5.5 liters per 100 kilometers.

Rich families beware: unlike the other model variants, the Seat Tarraco e-Hybrid is no longer a seven-seater. The third row of seats simply cannot be combined with the rear-mounted battery pack. With a maximum load volume of almost 1,700 liters, the trunk volume remains intact, but there is also enough space under the flat loading floor to store the charging cables.

A logical addition to the range, this Seat Tarraco e-Hybrid. The plug-in hybrid powertrain fits the family SUV like a glove, especially since neither the driving comfort nor the handling really suffer from the extra weight of the batteries. It’s a pity that it feels less powerful than it actually is, that the electric driving range is somewhat disappointing and that the seven-seater configuration is no longer possible. But otherwise a convincing total package. And as FR, the plug-in hybrid SUV also looks very slick. Although that is also allowed, because the Seat Tarraco e-Hybrid is not a giveaway.