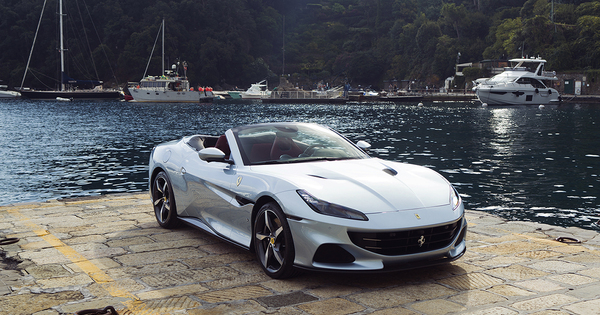 At Ferrari, the letter ‘M’ (for Modificata) stands for facelift versions. In the case of the Portofino, that update means that this roadster takes over the evolutions of the more recent – and therefore more modern – Roma. It is only logical, because both models are closely related: the Roma took inspiration directly from the Portofino launched in 2017 for its architecture with V8 mounted longitudinally in the front.

To understand the real raison d’être of the facelift, we have to take a look under the hood of the Ferrari Portofino M. The pressure-fed V8 codenamed ‘F154 BH’ – the same as in the Roma – is theoretically 20 hp more powerful than the ‘F154 BE ‘ from the ‘old’ Portofino, but the net profit is actually even greater. Due to the use of particulate filters in the exhaust, the 3.9-liter engine initially lost 22 hp; to arrive at 620 hp, the engine became in reality 42 hp more powerful. The maximum torque of 760 Nm remained unchanged, but is now available from 3,000 to 5,750 rpm, which is 500 rpm longer than before.

The most notable evolution is the replacement of the robotic seven-speed dual-clutch gearbox with the eight-speed model found on the Roma – or the SF90. The exhaust system has also been thoroughly revised, with smaller and more efficient catalytic converters in addition to the above-mentioned particulate filters. Just before the tailpipe, the system features new oval-shaped valves, which replace the classic mufflers to generate more torque and, above all, a better engine sound. The disappointing engine noise on Ferrari’s GT roadster has been a point of criticism since the California T, but this Portofino M has now brilliantly put an end to that, at least in Sport and Race driving modes.

The Ferrari Portofino M may be an entry-level model, but even on these narrow roads it offers rare sensations. The ultra-precise throttle control, the wonderfully sharp steering wheel with electric power steering, the agile and playful chassis, the sixth-generation differential lock, the excitingly playful and even acrobatic rear-wheel drive, the turbo without the slightest inertia and the driver assistance systems that are anything but intrusive. to be.

The Portofino M is more inviting to push the limits without having to worry too much. And if that bend comes closer than expected, you can always count on the pure stopping power of the carbon ceramic Brembo brakes, all the more because the pedal stroke was 10 percent shorter than in the ‘old’ Portofino, so that the brakes engage more firmly. The gearbox also works almost perfectly. Although the Ferrari Portofino M is razor sharp, the adaptive (magnetorheological) shock absorbers really blow our socks off on bumpy roads and when crossing speed bumps with their absorbency.

The boot of the Ferrari Portofino M has increased slightly, but it still only fits two hand luggage cases when the hood is open, and barely any more when closed. The designers did add a ski hatch, which may help somewhat. The ergonomics take some getting used to, especially when it comes to turning indicators, wipers and washers (all with buttons on the steering wheel), but the advantage is that you always have your hands on the wheel. The storage space has been well thought out: there is a special place for your smartphone, while you can store your keys or a can in a specific recess (with lid). A storage compartment is also integrated into the armrest, not to mention the spacious door pockets and the classic glove box.

At Maranello, they know their business: this roadster is even more in keeping with the heritage of the Italian sports car brand. In everyday life, the Ferrari Portofino M not only offers more sensations, but also more ease of use. His (relative) versatility and his attention to la dolce vita ensure that you can enjoy the Ferrari feeling longer and more often than in the strict two-seaters that are closer to the racing spirit so dear to the brand.

The Ferrari Portofino M is a dream for lovers of exclusivity and thrills who are not obsessed with those last tenths of seconds on the track.