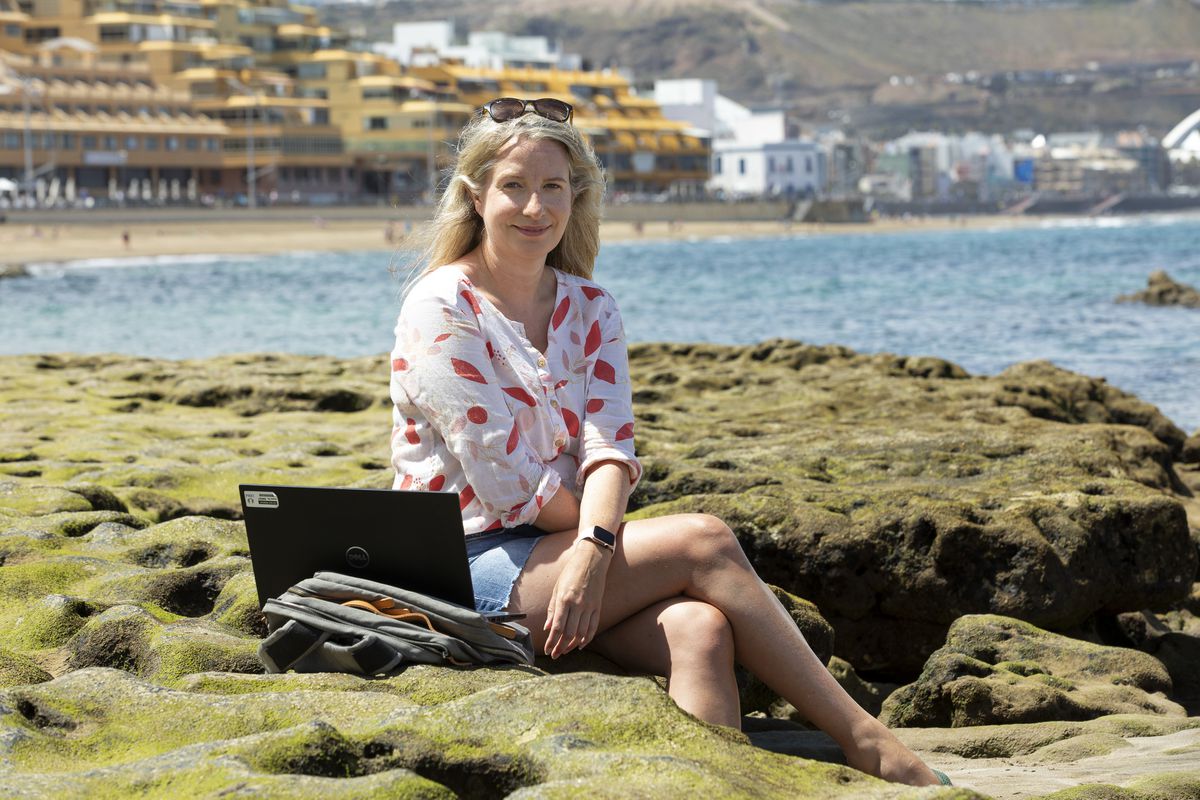 Sonia Amroun is a 34-year-old Parisian entrepreneur, commercial manager of the startup French Mobeelity. In December he packed his bags to escape bad weather and confinement in France. Sonia was going to stay a month, until she got to know La Palma and stayed. Now, he has decided to make his profession compatible with the management of the coliving rural Casa Benahoares in the municipality of Los Llanos de Aridane. “The idea that big brains have to be in a metropolis and live a stressful life to progress in their careers is over,” he says via videoconference. “I work 12 hours, seven days a week. But I look at the mountains and I am happy. La Palma is my dream come true ”.

The island’s tourism industry is languishing like few others in all of Spain. The streets are empty in the main centers, with less than 40% of the accommodation floor (about 170,000 beds) open. The archipelago is already the autonomous community with the most unemployment, and practically all economic and political agents warn of an explosive social situation in the short term. While the vaccine arrives, the commitment to telecommuting has become a lifesaver for many entrepreneurs. The professionals who arrive have a much greater purchasing power than the average tourist and they also spend more. And that, without generating the impact of mass tourism.

The arrival of this type of employee has increased by 10% per month since last September, when the Government of the Canary Islands announced a plan endowed with 500,000 euros – basically for marketing and training campaigns – aimed at attracting some 30,000 professionals in a decade. For now, the total figure is estimated at 8,000, from various places such as Germany, France, the United Kingdom and, increasingly, the United States, according to the Canarian Association of Collaborative Spaces. This is a new movement not yet contemplated by traditional polls such as Frontur and Egatur.

For 22-year-old Tracy Keogh, this is a game changer. She is not just an Irish teleworker who has opted for the Canary Islands in times of coronavirus. She is the co-founder of Grow Remote, a startup Irish supported by the Government of the country that tries to connect companies with employees from all over the world who work remotely. “It is no longer simply about freelancers who decide to travel. It is a paradigm shift, a new way of working ”. The Minister of Tourism, Yaiza Castilla, confirms this assessment. “During this last year, that intention to work remotely from other places has become more resounding.”

Juan Betancor has signed up for this conversion. His real estate business Living Las Canteras (Las Canteras is the main beach in Las Palmas de Gran Canaria) has been in operation since 2010 and manages, among other properties, 16 beachfront homes. “Until last year, 5% to 10% of rents came from teleworkers. Since October, these represent 90% ”. However, the business is no longer as profitable as it used to be: a tourist would pay 900 or 1,000 euros for a week; remote workers barely leave 1,400 for the entire month.

Fiona Murray is one of these teleworkers who has rented a room from Betancor. A 44-year-old Irishwoman, she left London in October to live overlooking the beach. “My life there had turned into a nightmare,” he explains from his terrace. “Now I work more than before, but I swim every day in the Atlantic.” Murray was a director of Informa, a company that organized food fairs and that has redirected its activity towards intermediation and trade with Asia.

The fight is not limited only to attract professionals. Technology companies are in the sights of Cosme García Falcón, general director of the Gran Canaria Economic Promotion Society (Spegc), a body dependent on the Island Council. “There are 12 digital animation and post-production companies installed on this island alone,” he explains. According to their data, the employment generated by these types of companies has almost tripled in just two years and is allowing local talent to enter the market. The organization has also just published the guide in English and Spanish How to settle in Gran Canaria, In which he explains everything from paperwork to advice and solutions to common problems that families with relocation projects may encounter.

The growing arrival of teleworkers has triggered the interest of entrepreneurs to provide services. “Especially with regard to cooperative coexistence,” explains Ignacio Rodríguez, businessman and executive member of the World Teleworking Association. “This is what I think is going to grow significantly, given that coworking spaces have been more affected by the restrictions.” Coworking consists of professionals who decide to share the same workspace, both physical and virtual, to develop their professional projects independently, while promoting joint projects. Cooperative coexistence constitutes an evolution of coworking in the housing market: it consists of creating spaces for residents with similar interests (teleworking, for example), so that in addition to sharing a work space, they share a house where they can continue to exchange work and life experiences.

Not only small businessmen participate in the boom. Grupo Mur is a local chain with four hotels in Gran Canaria and Fuerteventura. “You have to go with the trends,” says its CEO, Mario Romero Mur, former president of the Círculo de Empresarios de Gran Canaria. That is why a newly built property will open in November in the thriving beach neighborhood of Guanarteme.

Not everything revolves around cities. Sonia Amroun has found happiness in a coastal town of La Palma with just 21,000 inhabitants. Like her, two entrepreneurs from Tenerife, Carlos Jonay Suárez and Elsa Rodríguez, have set out to attract teleworkers to the rural world with the initiative Remote Towns. “We want to connect rural environments with teleworkers, connect local actors and entrepreneurs and entrepreneurs with each other, and thus try to generate socioeconomic benefits with minimal negative impact,” they say in a videoconference. His first project will take place in Icod de los Vinos (north of Tenerife). Its objective is to bring ten people there from anywhere in the world willing to telework from May 23 to June 13, on condition that they get involved in six entrepreneurial projects in the municipality.

The pandemic will come to an end (predictably), and many telecommuters will return (predictably too) to their places of origin. The Canary Islands and their entrepreneurs are fighting to spread their example and make them stay or, at least, repeat. With Fiona Murray they seem to have succeeded. “In June I will return to London,” he explains. “But I’m going to talk to my bosses so that they let me telecommute for the whole of December. I have to keep the Canary Islands in my life ”.

5 tips to get the most out of Mass Effect: Legendary Edition