Teacher is punished for cutting the hair of his students 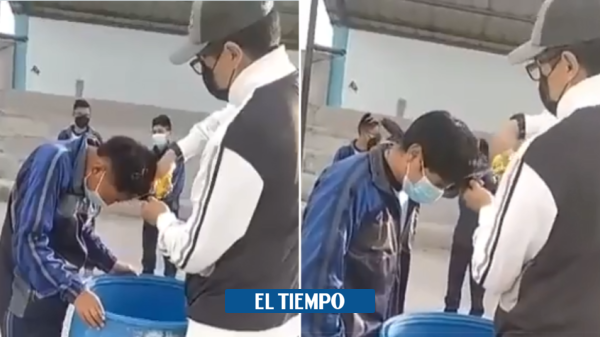 A video circulating on the internet in which you see A teacher cutting his students’ hair as a form of punishment has generated strong outrage on social networks.

The event occurred in an institution located in Latacunga, in Ecuador, according to local media reports.

In the video broadcast on social networks, which would have been recorded by another student who was present at the time, It can be seen that the teacher organized the students in a row to proceed to cut their hair one by one.

The clip shows how the teacher calls the students, makes them lower their heads and cuts their hair with scissors in front of a bucket in which the hair falls.

(Also read: By ‘accident’, man hit in the face with a weight)

According to the Ecuadorian newspaper ‘El Universo’, the teacher cut the front part of the students’ hair as a disciplinary measure, apparently without the consent of the minors’ parents.

The aforementioned newspaper stated that it would be the institution’s Physical Culture teacher.

Parents of the school family affirmed that it is not the first time that an event like this has occurred and they said that although there is a coexistence manual that indicates that students should wear their hair properly, there is no mention of a specific cut or hairstyle.

The Andean Human Rights Coordinator affirmed that the act constitutes a violation of the image, dignity and rights of the students, for which the respective sanction was requested from the teacher after taking an arbitrary measure against the students.

(You may be interested in: Child testifies against his mother who tried to kill him: “He told me to sleep”)

Sanctions against the teacher involved

The newspaper ‘El Universo’ indicated that the incident was reported to the director of the institution where the event occurred, who removed the teacher from his post.

For its part, The Ministry of Education of Ecuador affirmed that it is an alleged case of institutional, physical and psychological violence, for which it opened an administrative sanctioning process.

The entity announced that, once the investigations were carried out, the routes determined to attend to the students, who already have permanent accompaniment, were activated.

(Also: Fan sells his engagement ring to go to the game and they finish him)

“The District Conflict Resolution Board activated the corresponding actions and issued the protection measures with the transfer of the teacher involved, who will perform administrative functions while due process is carried out”, the Ministry said in a statement.

For the sleepyheads who defend the frustrated hairdresser disguised as a teacher. Know that with the latest reforms to the COIP, academic harassment is a violation, therefore @Educacion_Ec You should send the file that has been opened against you to @FiscaliaEcuador . pic.twitter.com/kiHBQYJjw8

Rehabilitating Tiger Woods is on the Masters Augusta start list