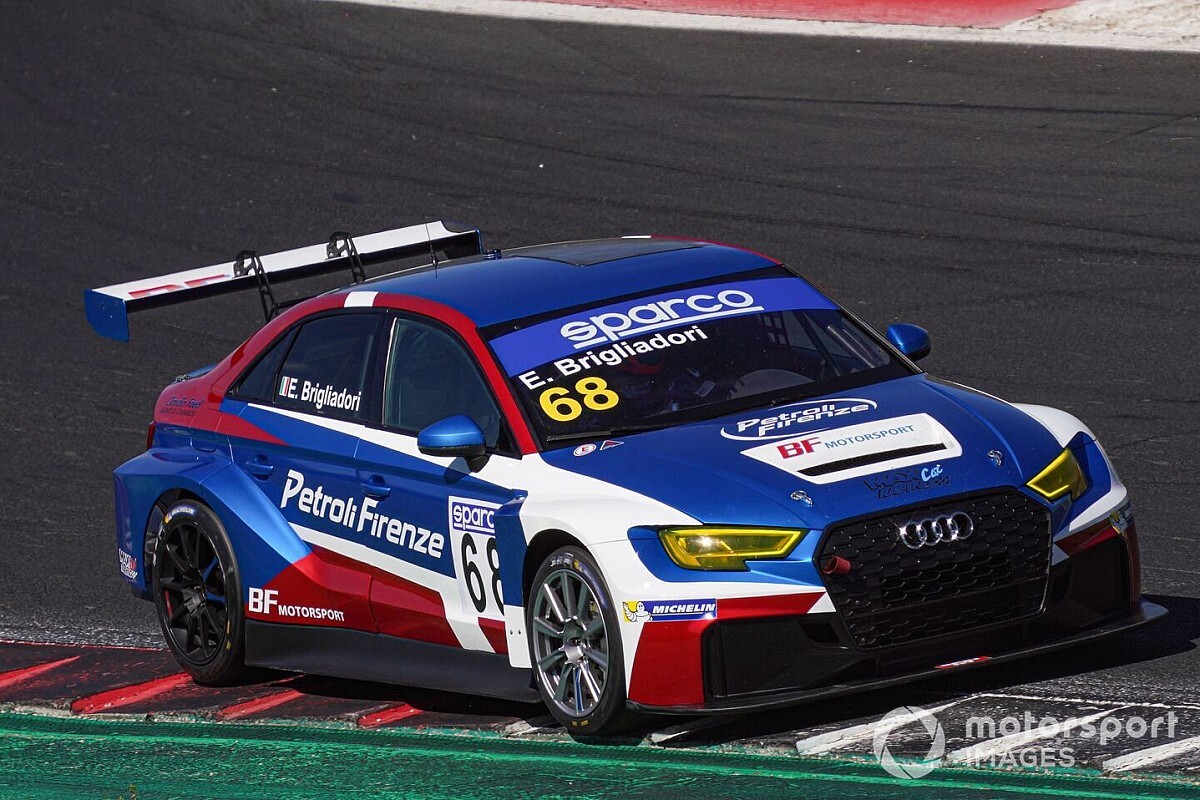 Eric Brigliadori easily wins Race 1 of TCR Italy under the scorching sun of Vallelunga, dominating from the first to the last lap with his Audi RS 3 LMS.

The driver of BF Motorsport made the most of the departure from the pole position won in qualifying on Saturday afternoon to win in front of Salvatore Tavano’s Cupra Leon Competición.

The reigning champion of the Scuderia del Girasole was perfect when the traffic lights went out, immediately passing the Hyundai i30 N of Nicola Baldan (Target Competition), who started from the front row alongside Brigliadori, taking the place of honor without ever giving up.

At the start of the race there was a collision in the rear between the other drivers of the Scuderia del Girasole: Raffaele Gurrieri tried to put his colleague Federico Paolino in the “Curvone” and the contact knocked out both, with the Safety Car that had to take action to remove the two Cupras.

At the restart on lap 4, Brigliadori ran away, Tavano managed the situation by extending his pursuers, also because behind the Sicilian the battle between the Hyundai of Antti Buri, Baldan and Kevin Ceccon (Aggressive Team Italia) started.

The Finn overtook his team-mate from Veneto, who in the second part of the race tried to make up for it, but a small mistake at the “Roma” corner put him under attack by Ceccon.

Brigliadori had no problems going to triumph with over 5 “on Tavano, Buri instead completes the podium with the second Hyundai of the Target Competition, while Ceccon takes advantage of Baldan’s left front puncture to jump to fourth place in front of his rival, who passes slowly in Top5.

The same fate also happens to Michele Imberti, who was doing so much good at the wheel of the Cupra Leon Competición. The Elite Motorsport boy was in sixth place and after resisting the assaults of his opponents – also due to the breakage of the front splitter on the left side – he was forced to lift his foot with a flat tire in the final round, sadly finding himself 13 °.

So take advantage of Igor Stefanovski (Hyundai-PMA / AKK) and Evgenii Leonov (Cupra-Volcano Motorsport), long at loggerheads in the fight for what were the sixth and seventh place prerogative of the Macedonian and the Russian, several times to touch each other among the sparks.

Having got rid of the slower cars at the start, Riccardo Romagnoli concludes eighth with the old Cupra of Proteam Racing, followed by the excellent Ruben Volt, forced to stop in the pits on the first lap and then reassembled in a furious manner with the Honda Civic Type R of ALM Motorsport .

It did not go better for his teammate Mattias Vahtel, retired with a technical problem 5 ‘from the end when he was in contention with Imberti for sixth place.

The Top10 is completed by Denis Babuin, still victorious in the DSG Class with the Bolza Corse Cupra, well ahead of those of Sabatino di Mare (DMP Motors / Scuderia Vesuvio) and Giorgio Fantilli (Six Engineering).

Jonathan Giacon did not race due to a mechanical failure accused by Honda of Tecnodom Sport in Qualifying, absent from the event due to the too much damage reported at Misano in the accidents with Paolino both Matteo Poloni (Audi-Race Lab) and Ettore Carminati (Hyundai-CRM Motorsport ). Not even Dusan Kouril (Hyundai-K2 Engineering) joined.

Finally, we report the pleasant return of Tarcisio Bernasconi to the wall of the Scuderia del Girasole.