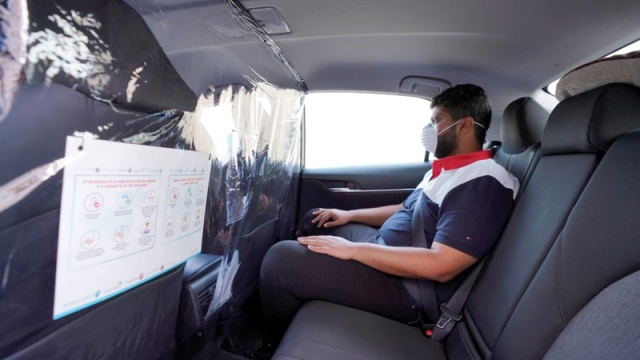 Residents in Abu Dhabi complained about what they described as the “intransigence” of some taxi drivers, especially those working in front of malls and shopping centers, in implementing the precautionary measures to confront the “Corona” pandemic, as they require one person to ride in the vehicle, and they refuse to deliver families, claiming that they apply the announced measures. From the Integrated Transport Center of the Department of Municipalities and Transport in Abu Dhabi. A driver, who declined to be named, revealed that drivers who practice this behavior are trying to take advantage of the current health conditions to their advantage by forcing families to use more than one vehicle.

The Integrated Transport Center informed «Emirates Today» that the precautionary measures stipulated that two people, in addition to the driver, ride a maximum, with the exception of members of the same family, calling on customers to report any driver violating instructions through official complaints centers and channels.

In detail, Emirates Today has received complaints from citizens and residents of Abu Dhabi regarding the mechanism for determining the number of taxi riders, stressing that some drivers refuse to allow families to board the vehicle, and ask its members to distribute themselves among a number of vehicles, claiming that the precautionary measures are adhered to.

They stressed that the taxi drivers abuse the implementation of the precautionary measures, by requiring them to accompany one passenger in each vehicle, even if the passengers are from the same family, pointing out that this measure caused verbal altercations with them, especially in front of malls and shopping centers.

Citizen Hussain Saeed Al Ahmed said: “Circumstances forced me to seek the assistance of a taxi after a breakdown in my car in one of the shopping centers, and my wife and sister accompanied me. Three vehicles instead of one ».

The electrical engineer, Tharwat Ibrahim Shaker, confirmed that he and his mother and wife were surprised, after they left Carrefour on Airport Street in Abu Dhabi to take a taxi, that the driver refused to accompany them, pointing out that he tried to convince the driver that he came from his home in a similar taxi and accompanied by his family members, but the driver stuck His position, and suggested that he use more than one vehicle.

He said, “As soon as the driver left, we moved away a little from (Carrefour), and we stopped another vehicle and got into my family without any problem, which confirms that these procedures are selective.”

This was confirmed by accountant Ayman Shaban, explaining that the taxi drivers’ refusal to ride him and his family in one vehicle was repeated more than once in front of malls and markets, which prompted him to resort to mass transportation.

A taxi driver, who preferred not to be named, revealed that there are agreements that drivers enter into secretly with some of them to exchange benefits, explaining that the presence of a family of passengers means that more than one car can be used to transport its members.

For its part, the Integrated Transport Center stated that it had updated the procedures for transporting passengers in small taxis (four passengers), to include permitting the transport of only two passengers, in addition to the driver, and loading three passengers in addition to the driver as a maximum in larger taxis, with a requirement to preserve A meter distance between the passenger and the other, stressing that he exempted members of the same family from this condition.

He said: “In the event that taxi drivers do not abide by the instructions, or are abusive in their application, taxi users and the public can submit complaints, observations and suggestions, by contacting the center’s call center on the number 600535353, to take the necessary measures against the driver, within a period not exceeding five work days”.

The Integrated Transport Center confirmed that the fleet of taxi vehicles operating in Abu Dhabi includes 6390 vehicles, 85% of which operate in Abu Dhabi city, and 15% in the cities of Al Ain and Al Dhafra. Humble 21 vehicles.

He pointed out that the number of natural gas vehicles is 3,879 vehicles, while the percentage of environmentally friendly vehicles (hybrids) is 85% of the total vehicles.

• Drivers who require one person to be accompanied in the vehicle … and passengers who confirm that the precautionary measures are being used for a personal benefit.

Inditex enters cosmetics with the launch of Zara Beauty