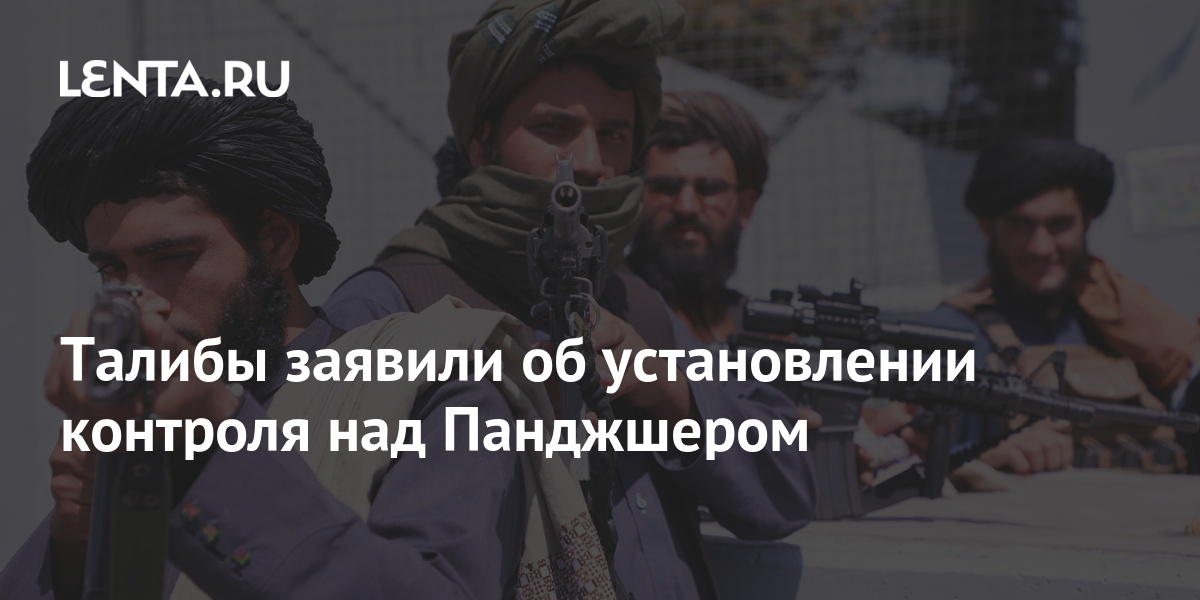 The radical Taliban (a terrorist organization banned in Russia) established control over the Afghan province of Panjshir. About it writes Turkish newspaper Yeni Safak citing its correspondent in the region.

It is noted that the Taliban have already begun to celebrate the complete takeover of Afghanistan. According to the source TASS, Taliban leader Akhundzad will become the supreme leader of Afghanistan, Mohammad Hasan may be appointed prime minister.

The Taliban are assembling the government and playing diplomacy. What awaits Afghanistan under terrorist rule?

The Taliban’s offensive began on September 2–3, after the failure of negotiations with the leader of the Front of Resistance, Ahmad Massoud. He demanded that the terrorists coordinate all decisions of the new Afghan government with the Panjshir rebels, and also allow them to keep their weapons.

The Taliban assured that after the failure of the negotiations, they would throw their best forces on Panjshir, accompanied by military equipment. According to representatives of the terrorist organization, this strike was to become the final one in the conflict with the Resistance Front.

It was noted that the Taliban attacked the valley in three directions: in the Shotol area, as well as on the Havak and Anjuman passes, but the militants’ night offensive failed. After that, information appeared that the Taliban had lost several areas. Among the territories lost in the battles with the rebels are the districts of Heza Avval, Heza Dovvom and Koh Band in the province of Kapisa, the districts of Sayed Khel, Charikar and Jabal al-Saraj in the province of Parwan. An uprising began in the province of Badakhshan, and the militants had to leave several districts.

On Friday, September 3, the Taliban announced that they had taken control of the Panjshir. They gave a salute in honor of the fall of the resistance front.

Representatives of the rebel Panjshir resistance front in Afghanistan have denied Taliban reports that they have taken over the province. Former vice-president of the country Amrullah Saleh, who supports the rebels, said that the fighting in Panjshir continues, now the confrontation has intensified.

Saleh said that he was at the base in the Panjshir Gorge. He held several meetings with Afghan military commanders and political leaders. He also accused Pakistan of supporting the militants of the terrorist movement.

This is no doubt a difficult situation. We are facing the invasion of the Taliban and other terrorist groups in the region and beyond, which, as usual, are supported by Pakistan

about the Taliban invasion of Panjshir

Igor Yamshchikov, chairman of the board of the Yaroslavl regional organization Russian Union of Afghanistan Veterans, believes that the Taliban will not be able to conquer Panjshir, where the resistance forces headed by Ahmad Masud are based. According to him, the participants in the resistance are well armed and will not surrender to any armed forces. He explained that he himself served in this province in 1982-1983 and knows the peculiarities of the way of local residents who are ready to defend their territory to the last.

You have to understand that Panjshir is a separate planet on the planet Afghanistan. These are not crazy fanatics, they are people with a completely different philosophy and psychology.

Military historian Boris Yulin argues that the probability of victory of the resistance in Afghanistan is negligible. He stressed that it is impossible to ensure the influence of the world on Afghanistan today, since NATO forces have left the country, and there are no other levers of influence, except for force, left.

The Panjshir resistance fought simultaneously with the Taliban only against the Soviet Union, and the rest of the time they were opponents. The forces led by Ahmad Masud Sr. relied on the Americans, so reconciliation cannot be expected here – according to the Taliban, it was Massoud who contributed to the occupation

on the likelihood of victory for the Panjshir resistance

The military expert believes that the world community will not interfere in the war, which the United States has already lost. Russian involvement is also unlikely, as the country has already entered into negotiations with the new Afghan government.