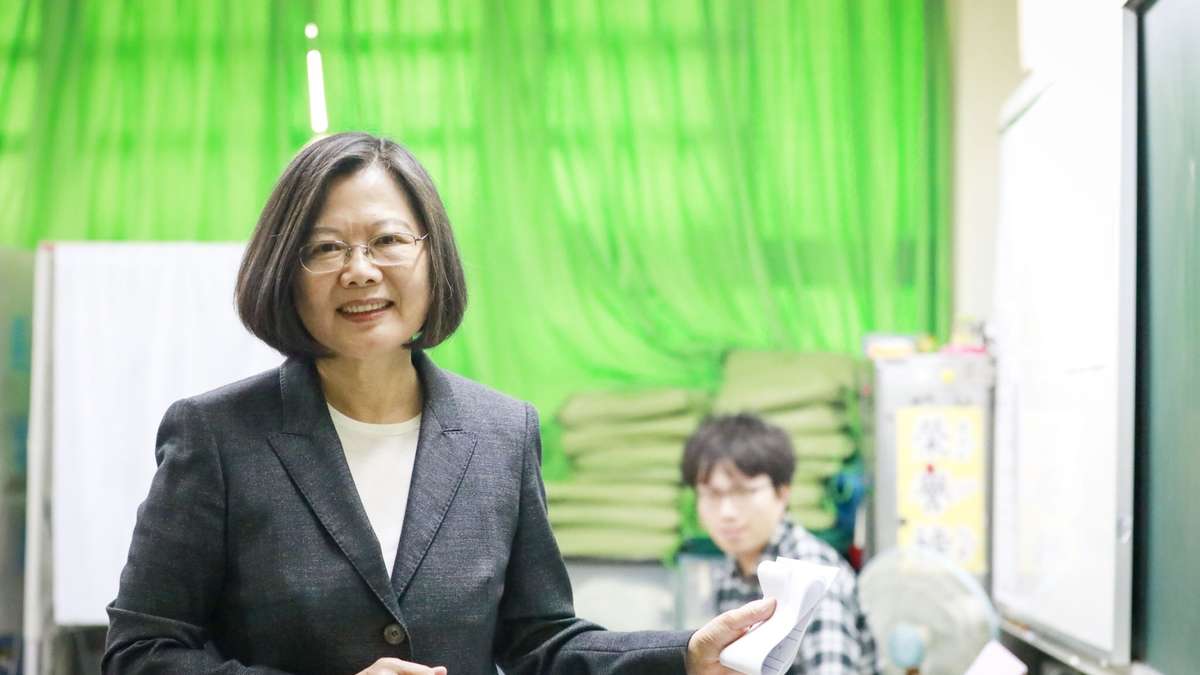 Taiwan is a modern industrial location with international economic ties. Diplomatically, however, it is isolated because of the one-China policy. Beijing regards the island as part of the People’s Republic of China.

Taiwan is an island located 160 kilometers off the coast of southern China in the western Pacific. It is about the size of the Netherlands and has a population of 23.6 million. The island is of volcanic origin; two thirds are mountainous, especially the east coast. Large cities, ports and agricultural land are therefore mainly along the flat west coast, which borders the Taiwan Strait. The climate is subtropical with lots of rain and occasional typhoons.

The status of Taiwan with the capital Taipei has been in limbo for decades for historical reasons. The government in Beijing regards Taiwan as an inseparable part of the People’s Republic of China. In fact, Taiwan manages itself under the name “Republic of China”. Taipei does not formally declare itself to be independent and has no diplomatic relations with most countries in the world. According to the People’s Republic’s one-China policy, there is only one China in the world. Those who have diplomatic relations with Beijing are not allowed to have such relations with Taipei. Few states, including the Holy See in the Vatican, recognize Taipei instead of Beijing.

From Beijing’s point of view, Taiwan has been a breakaway province since 1949. At that time, the defeated nationalists of the Kuomintang party fled from Mao’s Communist Party to the island. There they established a state that they called the “Republic of China” – like the state that they had officially ruled until the Second World War and also during the civil war, at that time with the capital Nanking.

So far, China has accepted the status quo as long as Taiwan does not declare itself to be independent. However, Beijing is basically striving for reunification and has never ruled out violence for this purpose. The quality of relations between the People’s Republic of China and Taiwan fluctuates depending on the respective political circumstances. In general, the nationalists of the Kuomintang Party are now considered more China-friendly than the Democratic Progressive Party (DPP) of current President Tsai Ing-wen. The DPP had spoken out in favor of Taiwan’s independence in the past, but has since abandoned this claim.

The history of Taiwan

Taiwan has had an eventful history with many changes of power. In 1517 the island was discovered by the Portuguese. Nevertheless it remained almost exclusively inhabited by Malayo-Polynesian peoples until the beginning of the 17th century. At that time, Chinese settlers began to settle in Taiwan. At the same time, the Dutch founded a colony on the island that existed for about 40 years.

When the Chinese Ming dynasty collapsed in 1644, Ming loyalists fled the conquerors of the Manchurian Qing dynasty to Taiwan and took control there. In doing so, they drove away the Dutch colonialists. In 1683 Qing soldiers occupied the north and west coast – but it was not until two hundred years later that the Qing dynasty officially declared Taiwan a province of the Qing Empire in 1883. This did not last long either. The Qing Empire lost the Sino-Japanese War. In 1895, the Qing Dynasty had to cede Taiwan as a colony to Japan in the Treaty of Shimonoseki. Japan then viewed the island as a model for other colonies and tried to promote the island’s economy, infrastructure and culture.

After Japan surrendered in 1945, Taiwan fell back to the nationalists of the Kuomintang, who were then the government of China. The Kuomintang (KMT), however, lost the ensuing civil war against the communists; their functionaries around “Generalissimo” Chiang Kai-shek and the KMT soldiers fled across the sea to Taiwan, followed by 1.2 million Chinese. These were called “Waishengren” on the island: “People from outside the province”. The KMT established the Republic of China in Taiwan, while Mao Zedong proclaimed the People’s Republic of China in Beijing in October 1949. The communists refrained from conquering Taiwan at the time. But since then, the People’s Republic has viewed the island as a breakaway province.

A decades-long dictatorship of the Kuomintang regime followed in Taiwan. Until 1987, the KMT ruled by martial law and a state of emergency. The local population, language and culture were systematically suppressed, while the Chinese culture from the mainland was spread as an ideal. The “Waishengren” became the new power elite in the Republic of China, although numerically they were only a small minority.

For a long time, both the People’s Republic and the Republic of China insisted that they themselves were the only legitimate representatives of China. Other states were thus prohibited from establishing diplomatic relations with the other government. At the international level, the Republic of China was initially recognized in Taiwan as the legal representative of the Chinese state. The western powers had only diplomatic relations with Taipei. The Soviet Union and the Warsaw Pact states sided with the People’s Republic. In 1945 the Republic of China co-founded the United Nations and secured a permanent seat on the World Security Council. However, in the decades that followed, Taiwan found itself more and more isolated.

France became the first western country to change its China policy in 1964. President Charles de Gaulle broke off all diplomatic relations with the Republic of China to negotiate with Beijing instead. More and more countries followed suit. In 1971, Taiwan had to give up its membership in the UN after a vote by the UN General Assembly. Almost all European countries voted to make the People’s Republic the only legitimate representative of China. Even the US, long regarded as the protecting power of the Republic of China, broke away from Taiwan in 1979 – a shock to Taipei. However, Washington Taipei continued to provide military support in its Taiwan Relations Act, which continues to this day.

The democratization of Taiwan

In March 1978, Chiang Ching-kuo succeeded his father Chiang Kai-shek, who died in 1975, as President of the Republic of China. Chiang Ching-kuo, also known as CCK by supporters, had spent several years in the Soviet Union, where he also showed sympathy for communism and married a Russian woman. Nevertheless, he understood that a democratization of the political system was necessary. A slow political opening followed. In 1987, the CCK repealed martial law, allowed travel to mainland China and admitted the DPP, the first opposition party, to an election. Freedom of the press also returned to the island. Many local languages ​​and dialects experienced a renaissance. CCK died in 1988; he will be followed by Vice President Lee Teng-hui – the first modern Taiwan-born president. Lee was also the first to face a direct election – and was confirmed in office.

The Taiwan conflict up to the modern age

With the opening in the eighties, Taiwan’s economic rise to one of the “Asian tigers” began. At the same time, there was a rapprochement with the more pragmatic China Deng Xiaoping. Deng let Taiwanese capital in, and so many Taiwanese entrepreneurs set up factories in southern China. Many of them are still very successful there today.

The question of “one China” remained unresolved. However, both sides found a compromise on this, the so-called “1992 consensus”. From October 28-30, 1992, officials from both sides discussed their respective positions on the one-China issue in Hong Kong. As a result, it was found that both parties agreed that there was only “one China” of which both Taiwan and mainland China were a part. However, the Republic and the People’s Republic have different views on how this “one China” is structured. This consensus has so far been the basis of the status quo. At that time, the Republic of China dropped its sole agency for all of China. Conversely, Beijing is sticking to this sole representation claim.

In the controversial “Anti-Secession Act” of 2015, the People’s Republic also legally reserved military means in the event that Taiwan formally secedes from the mainland. It states that China can respond to Taiwan’s attempts to secede with “necessary measures”. The law was passed unanimously in the National People’s Congress. At that time, the law met with criticism from around the world. According to Beijing, the new regulation should only promote peaceful reunification. At the same time, Beijing campaigned in Taiwan for reunification based on the “one country, two systems” concept applied in Hong Kong and Macau. According to this, Taiwan will be allowed to have a different political system after unification with mainland China and maintain freedoms in the economic, legal and financial areas. Taiwan has so far refused. After Beijing passed a harsh security law and electoral reform in Hong Kong, the model for Taiwan is now unlikely to come into question.

Because of the one-China policy, Taiwan is excluded from all international organizations. The Republic of China has regularly failed in attempts to join bodies such as the World Health Organization (WHO). At the Olympic Games, the Taiwanese team goes under the name “Chinese Taipei”.

Current relationship between China and Taiwan

While the DPP emerged from the independence movement, the KMT still relies on a rapprochement with the mainland. For example, the former KMT President Ma Ying-jeou announced in 2008 that he wanted a dialogue with the People’s Republic based on the 1992 consensus. In 2010, China and Taiwan signed the “Framework Agreement on Economic Cooperation”, which provided for the gradual reduction and elimination of tariffs. 2015 came to a historic moment when Ma Ying-jeou met with China’s head of state Xi Jinping in Singapore. The two politicians even shook hands in a symbolic act. The two heads of state had not met since the end of the Chinese Civil War in 1949.

However, when DPP President Tsai Ing-wen took office, the relationship cooled down again. Since the politician did not admit to the 1992 consensus when she took office, Beijing cut off communication with Taiwan without further ado. The DPP, in turn, wants to avoid economic and political dependence on China at all costs. However, Tsai always rejected demands from his own camp for a declaration of independence.

During the second half of the 20th century, Taiwan experienced strong economic growth, also known as the “Taiwan Miracle”. As the so-called “Asian Tiger”, Taiwan has developed into an important industrial and technological location. The industrialization of Taiwan began with light industry – such as textiles or simple machines. But it quickly worked its way up the value chain from radios and other electronic devices to computers, integrated circuits, chips and semiconductors. Technology exports grew strongly. An estimated 90 percent of all laptops worldwide are produced in Taiwan today, including branded products such as Apple and Acer.

Internationally, Taiwan has therefore developed into an important trading partner – also for Germany. There are more than 260 German companies in Taiwan, while there are again around 200 Taiwanese companies active in this country. However, Germany does not officially recognize the Republic of China as a state either. Instead of an embassy, ​​Berlin can be found with three unofficial official representations in Taipei, including the German Institute.

Ministry of Health advises only using AstraZeneca on over 60s