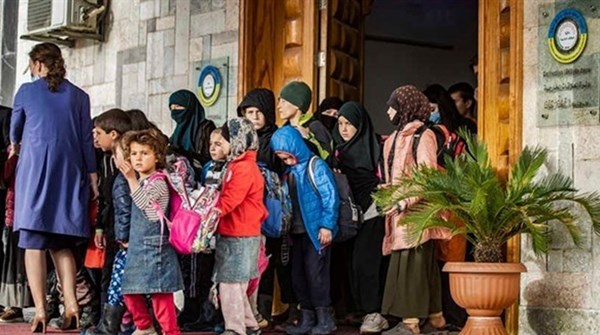 Yesterday, the Syrian Kurds handed over 4 Dutch people, a woman and three children, who are members of ISIS families, to a diplomatic delegation from their country, in the city of Qamishli in northeastern Syria.
The four are a mother with her two children: a boy (two years old) and a girl (5 years old), in addition to another 12-year-old girl. They were received by the delegation, which included the Netherlands’ special envoy to Syria, Emile de Bont, and the Director of the Ministry of Foreign Affairs for Consular and Visa Affairs, Dirk Jan Nieuwenhus.
The official of the Foreign Relations Authority in the Kurdish Autonomous Administration, Abdul Karim Omar, said during a joint press conference at the authority’s headquarters that “a Dutch woman with her two children and another girl who has a humanitarian case was handed over, after the approval of her mother, at the request of the Dutch government.”
The Dutch authorities estimate about 75 of the number of boys and girls in the camps run by the Autonomous Administration, in addition to 30 women and 15 men detained by the Kurds.
The children are part of at least 220 children who have Dutch citizenship in Syria or neighboring Turkey, according to the authorities of their country, 75 percent of whom are under the age of four and were born in the region to parents with Dutch citizenship.
Omar renewed his call on the international community to fulfill its responsibility by restoring its citizens and cooperating in this file, which constitutes a burden on the Autonomous Administration.
Since the announcement of the elimination of the “caliphate” of the terrorist organization two years ago, the Autonomous Administration has been demanding the countries concerned to take back their nationals who are in the camps.