Sweden The flood destroyed Tage Rehnvall’s summer cottage, several houses still on the water in Gävle – “I didn’t think this would happen in Sweden” 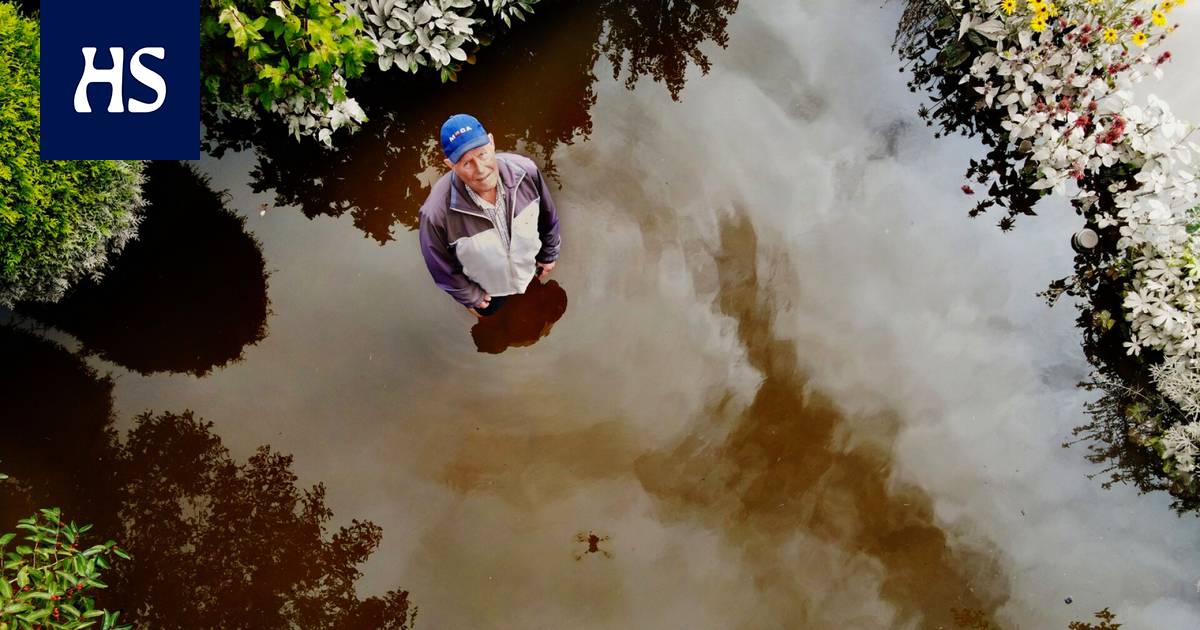 Water is cold, brown and almost reaches Tage Rehnvall to the knees.

The sun is glistening behind the cloud in the allotment garden in Gävle, Sweden. A day ago, the sky was dark, and from there rained a record amount of water, which now controls Rehnvall’s garden.

There was more water in one night than usual in two months.

Rehnvall wads in the water and looks at his cottage, which he has had for 20 years. Now the cottage seems to be gone. Floodwater has washed away the yard swing and furniture, mutilated the yard with new faith. The water has been floating inside the cottage the night before. It has poured on the floor a refrigerator full of food.

Rehnvall doesn’t know what to do. There is so much water that the water mass can stay in the yard for a couple of weeks, according to the insurance company.

“This was worse than I could have imagined,” Rehnvall, 81, says Thursday afternoon.

Tage Rehnvall has spent many fun moments with his friends and relatives at his cottage. “The allotment garden community is also great. The neighbor is helped. ” Picture: Magnus Laupa

“The cottage can hardly be repaired. It needs to be torn down and rebuilt, ”he believes.

Rehnvall is one of many Gävleans who are now repairing the devastation caused by the floods caused by heavy rains the night before Wednesday. The rescue service has received more than a thousand assignments in the area, but rescuers have not had time to help Rehnvall. The authorities have given priority to activities that are vital to society.

During Thursday, the rains have receded, but the floods have not.

In the allotment garden near the center of Gävle, there are still many cottages on the water. In the adjacent residential area, water ripples in the basement of almost every apartment. There are roads across and underpasses underwater.

The underpass near the center of Gävle was under water on Thursday. The roof of a vehicle combination that has come into contact with water peeks underwater. Picture: Magnus Laupa

The authorities of the municipality of Gävle are not yet in a position to estimate how many households are still affected by the floods.

Heavy rains came extensively during the night in Sweden, in addition to Gävleborg County, and in Dalarna, among others. Roads collapsed, residential areas fell on water, cars were washed away from you. In Gävle, the residents of the student dormitory were evacuated because flooding threatened to collapse the entire building.

The municipality of Gävle is located about 170 kilometers north of Stockholm. On Wednesday morning, 161.6 millimeters of rainfall was measured in the Gävle region, the highest in the region for more than 20 years and the highest reading in measurement history. Typically, rainfall of about 70 millimeters is measured in the Gävle region throughout August.

Tage Rehnvall has lived in Gävle for 45 years and does not remember such rainfall. Rehnvall, who has ended his career as principal of primary school, believes scientists believe that extreme weather events will increase as a result of climate change. Only a moment ago, Central Europe was shaken by the devastating heavy rains that killed an estimated 230 people.

“But I didn’t think that could have happened in Sweden.”

“In a hose was a lego block, ”he shouts Yngve Wassberg.

He helps the neighbor next door Ulrika Ahrmania, which tunes the hose to pump water out of the 90-square-foot basement.

In the basement floats a children’s pool filled with legos. At worst, there was more than a meter and a half of water in the basement.

Ulrika Ahrman woke up on a rainy night to an emergency text message from the authorities, which came from three at night. “Or I woke up in the rain. The whole house was shaking. ” Picture: Magnus Laupa

“Now we’ve pumped the water out, but we mustn’t do it too fast,” Ahrman says.

Otherwise, water can flow to the neighbors ’plots and make the situation worse.

“We need to have constant conversations with our neighbors. We have not yet received any professional help, so we have to find out for ourselves. We haven’t dared to use the toilet or shower yet, ”Ahrman continues.

The insurance company has told Gävle residents that the damage will be inspected when the houses and basements are no longer dependent on water. More than 900 claims were received during the day.

Yngve Wassberg, who lives opposite Ahrman, has yet to get into the pumping work herself, as she expects neighbors to get her basement taken care of first. There is still more than a meter of water in the basement of the Wassberg family. In the basement there is a Wassberg music room with lots of instruments: guitars, drums, keyboards.

Yngve Wassberg has lived in the same house in Gävle for 33 years. He has never experienced rain like the night before Wednesday. Picture: Magnus Laupa

A neighbor came to wake Wassberg from three in the morning, when the authorities sent an emergency text message to the mobile phones of all Gävle residents. It rained unprecedentedly hard. Wassberg peered into the basement, from which the water had already risen a few steps.

“The heaviest rains probably came at one to two at night. There was nothing I could do then. I just had to try to keep dreaming. ”

Wednesday after the floods, forecasts have been excavated in Sweden from the Swedish Meteorological and Hydrological Institute. According to them, heavy rainfall will only increase as climate change progresses.

Previously, the department estimated that rainfall would increase by 20 to 40 percent by 2100. In 2018, the plant revised its estimate: the intensity would double, 40–80 percent.

There is still a long way to go before 2100, but the extreme heavy rain came to Gävle already now. Police described the incident as a natural disaster.

Tage Rehnvall watches his cottage destroyed by the flood.

“The next cottage needs to be built higher.”

Eva Svedjerot tried to get to her cottage on Thursday but gave up hope. “This is a terrible situation. Many have just renovated their cottages and made everything great. ” Picture: Magnus Laupa

Merkel asks for the vote for Laschet: “it does not matter who governs this country”