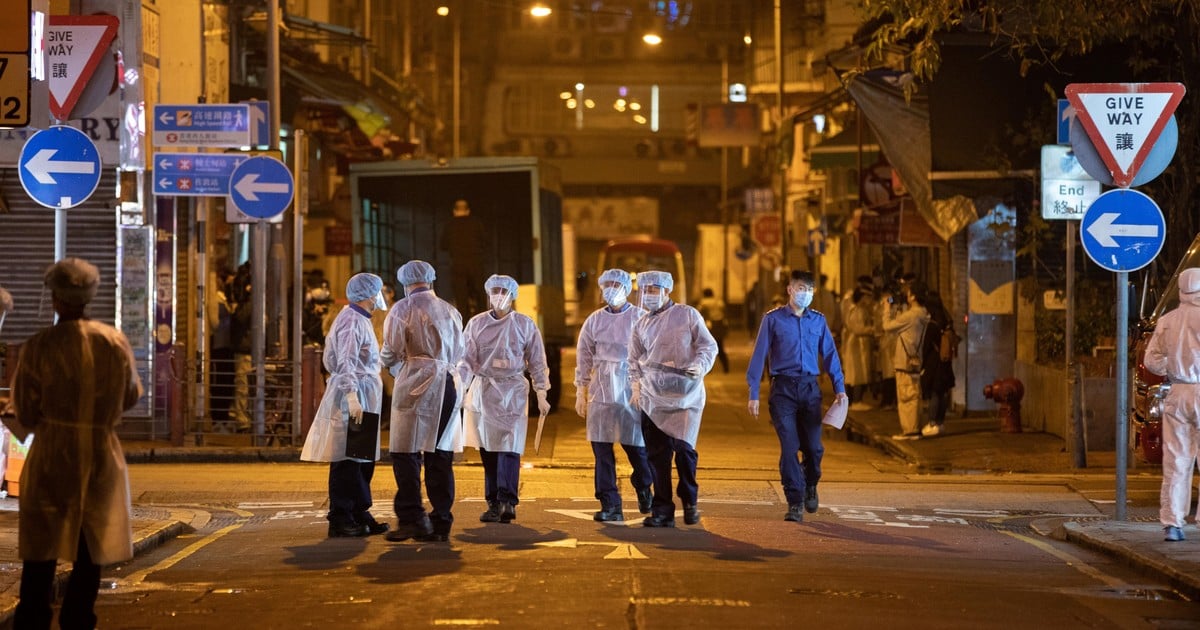 Ten days ago, the inhabitants of a neighborhood in Hong Kong were surprised at nightfall with the flashing blue of sirens and an unusual movement. “It’s full of policemen!” A four-year-old boy alerted who was looking out the window.

At the sound of the bugle, the neighbors saw how dozens of agents cordoned off several portals on the run and prohibited their occupants from leaving, provoking the occasional shouting match. Another group of agents, not very coordinated, blocked access to the street with metal barriers.

From the corners, a couple of officers explained over the loudspeaker that this was a “Unexpected confinement” –Also popularly baptized as “ambushes” -, the latest and controversial strategy adopted by the Hong Kong authorities to stop the spread of the coronavirus.

In total, the operation lasted from seven in the afternoon to six in the morning. In that time period, the 330 residents of eleven neighboring buildings underwent a mandatory coronavirus testing in the tents set up in a matter of minutes on the street.

Whoever refused, I awaited a fine of 540 euros. After taking the data and placing an identification bracelet on them, they were able to return home to rest and wait for a text message with the result. Except for one, all tested negative, and by the opening time of the neighborhood stores, the device had disappeared.

The “fourth wave” of the pandemic

Managing the coronavirus crisis in Hong Kong, a semi-autonomous Chinese territory with 7.5 million people, is bittersweet. On the one hand, its figures are remarkable (about 10,550 infected and 186 deaths since January of last year), especially when compared with those of other more affected countries.

But on the other hand, the restrictions imposed with each wave – total closure of schools, leisure and sports centers, prohibition of public meetings with more than two people or quarantines of 21 days in a hotel for those arriving from abroad – have caused serious economic damage and social, which add to a 2019 that was very complicated by street protests and political instability.

Since last month, with the city immersed in its fourth wave, the authorities also began to resort to the express lockdowns.

The first took place in Jordan, a densely populated neighborhood famous for its lively night market, its street restaurants and karaoke bars, and its grungy old apartment buildings, often illegally subdivided into infamous five-square-meter rooms – or less – in which the most disadvantaged take shelter.

After 160 cases were detected in the area, authorities deployed 3,000 officials to isolate and test 10,000 residents during a weekend, among which thirteen positives were located.

However, the problem was that their plans were leaked to the press several hours earlier, which led to many residents – including some in an irregular situation – taking advantage of that time to leave the neighborhood and escape uncomfortable questions.

To avoid similar episodes, they decided to opt for those surprise confinements, in which the agents arrive without warning so that no one can hide. Since then, about fifteen have already been done in different parts of the city, in which thousands of people were tested and barely a dozen positives were detected. The pace is expected to continue at least until the lunar New Year celebration next week.

A resident of the Jordan neighborhood in Hong Kong speaks with health workers who are performing a coronavirus test procedure. Photo: REUTERS

The new tactic is not without controversy. Among the criticisms are the high cost for the small number of cases located, which do not detect those who are incubating the virus or the anxiety they cause in neighbors and businesses, with some customers annoyed by having to spend the night trapped in the place where they were coloring their hair or shopping.

Even so, others are satisfied to know that their neighborhood remains “clean” of infected and the chances of contagion are reduced.

Although the criteria followed to delimit an area were not made public, the local press published guides with indicative signs. Among the most cited is that previous cases have been detected in the area or in samples taken from wastewater and that old buildings abound with subdivided units or that are not properly maintained.

But there may be surprises. Last Thursday the authorities returned to a neighborhood where they had been to carry out a much more extensive operation than the first.

In a few hours, they tested 2,160 residents in 240 blocks at stands erected on a basketball court. Among them, this correspondent for La Vanguardia. Once in bed, it was inevitable to worry about the possibility of a positive, which forces the infected, even if asymptomatic, to enter the hospital, and their partners to pass a strict quarantine in a government center. The tranquility arrived at dawn with a concise message: negative, the same one that other 2,158 neighbors received.

Investing The idea of ​​shorting Gamestop thrown into the air by portfolio managers ’“ dinners ”brought Melvin Capital $ 4 billion in losses -“ This is not an investment, this is madness ”

Tips for sowing: How to create a small garden on the balcony