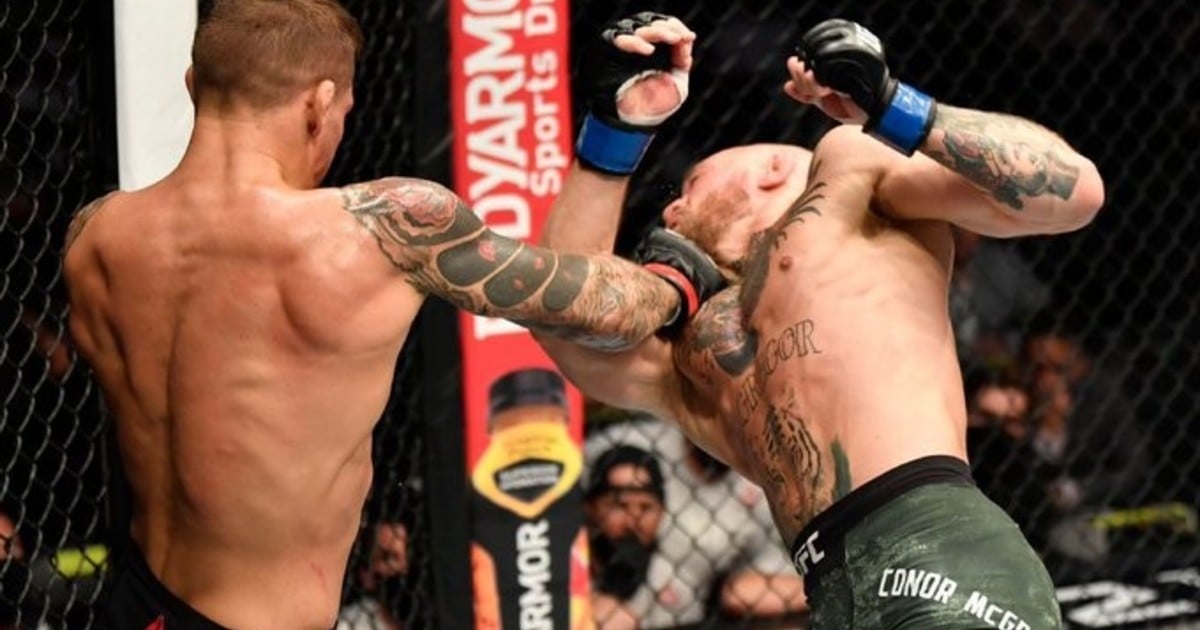 It was an inglorious return and yes with surprise. He had promised a faster victory than the one he had won against the same rival six years ago, and yet he had the opposite: the first knockout loss of his career. Conor McGregor fell with Dustin Poirier at UFC 257 in the second round and disappointed his fans but probably more himself.

Poirier began by betting on the short distance, the struggle and knocking down his rival. Good starting seconds were spent there, and once McGregor let go, it became clear why the American had sought those methods: the Irishman, once he was able to start taking shots – both with the right jab and with the direct ones from left-handed- at a distance, he punished and Dustin felt it.

And yet the king died in his law in the second round: when Poirier opened the gap going with the body down but surprising with his fists to the face and found the cheekbones of the Irishman, he hit one, two, three times with his left hand, he saw McGregor stagger, he finished off his right and the fight was over.

Conor McGregor tries to recover but the defeat with Dustin Poirier is already a fact. Photo Capture TV MMA UFC

The European recognized him by greeting him after recovering but even with the combat already over, he felt it felt felt and almost with difficulty walking, because of the wear and tear caused by several kicks that he had to defend with his own legs.

“This is hard to swallow, but I’m sure I will come back,” assured the loser.

The Irishman returned specifically for this fight of UFC 257, held at the Fight Island in Abu Dhabi and which brought him a profit of four million dollars – plus income from the pay per view– after just over a year without officially fighting after what was his third retirement.

Before some 2,000 people, in what was one of the first events with an MMA audience since the COVID-19 pandemic, it was a decisive fight to find the possible new champion in the lightweight category, whose belt is vacant since the retirement of Russian Khabib Nurmagomedov, who was the one who beat Conor McGregor in 2019.

The surprisingly defeated – not for lack of talent of his rival, but for the forcefulness – had disputed his last fight in January 2020 against Donald Cerrone, whom he defeated in 40 seconds. In June of last year, meanwhile, he had announced his withdrawal through social networks.

His last victory before that fight that was presumed to serve as a final farewell had been in 2016, against Eddie Alvarez, in what had been his return after the first goodbye.

The second, meanwhile, had been in March 2019, a year after falling with the aforementioned Nurmagomedov.

Perhaps – as in most aspects of his life, it is difficult to venture anything with certainty – McGregor is looking for the springboard to a constant return to activity. In fact, it is presumed that he will fight at least a couple more times this year.

It would be a good way to focus on sporting goals and leave behind some of the scandals that you have been involved in in recent times.

In April 2019, he offered a free whiskey to an older man who was near his group of friends in a bar and, given his refusal, the fighter had no better idea than to hit him with his left fist to the surprise of everyone. The video went viral soon after.

Barely a month had passed since his arrest in Miami for an altercation with a fan: he got angry because they took pictures of him without his permission, he took the boy’s cell phone, broke it and took what little was left of the device, which It was worth a complaint for theft.

Last September, meanwhile, he was arrested in Corsica on suspicion of attempted sexual assault and sexual exhibition.

In short, it was a new return to the foregrounds of the Ultimate Fighting Championship for the European, who was featherweight champion from 2015 to 2016 and lightweight from 2016 to 2018, when he lost the title for not defending it for two seasons.

There was little McGregor could do when he became a boxer and fought Mayweather. Reuters photo

At the time he ventured into boxing with a fight of the highest media caliber against Floyd Mayweather. That happened in August 2017 in Las Vegas and it was quite mediocre from the sporting point of view: the naturally boxer won by TKO in the tenth round but, beyond that unhappy passage through the world of “traditional” boxing, McGregor took more than 100 million dollars.

Conor, even before this fight, he saw Poirier as a stepping stone: he was between his eyebrows at the russian eagle Nurmagomedov. The Dagestani, I said, is currently retired after leaving with an undefeated record of 29 wins without knockdowns, and already beat the Irishman in 2018 with a submission in the fourth round.

The Irishman, with a thirst for revenge, yearns to regain the title of light. To the world of MMA, the second edition of the match would pay huge dividends. However, the stone guest ruined, at least for now, the plan of that dream fight.