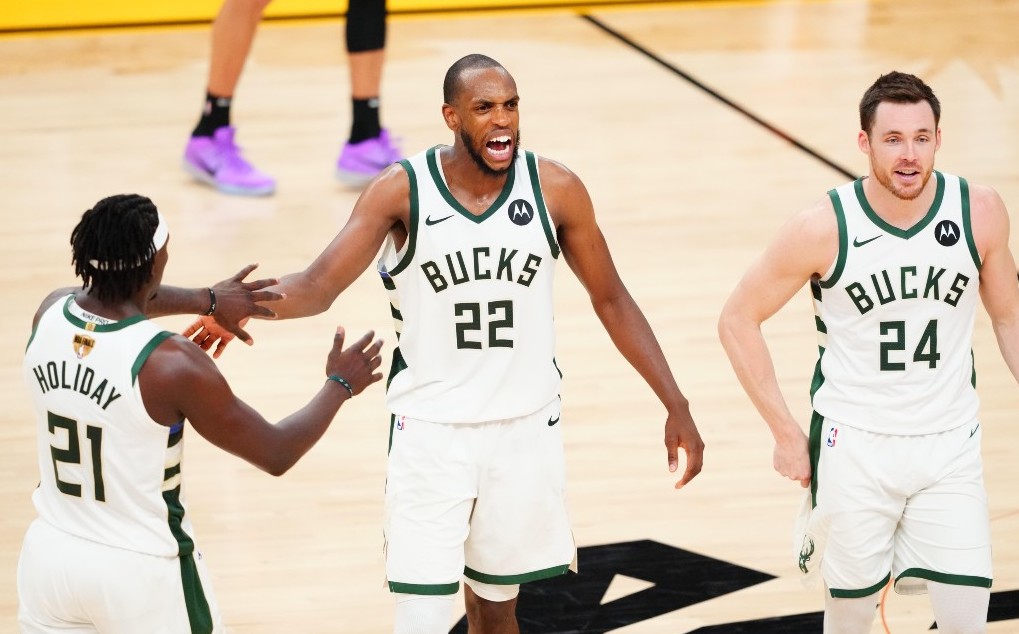 The Milwaukee Bucks beat the Phoenix Suns away this Saturday (119-123) to place 2-3 in the Finals and they will be champions of the NBA if they achieve victory on their court next Tuesday.

The Bucks’ portentous performance was built on the fantastic performance of their all-star trio: Giannis Antetokounmpo (32 points, 9 rebounds, 6 assists), Khris Middleton (29 points and 7 rebounds) and Jrue Holiday (27 points and 13 assists).

From the Suns, Devin Booker scored 40 points but was too lonely on the home side for most of the game.

After four games that were resolved with local victories, the Bucks snatched the home court factor from the Suns and cherished their first NBA ring in half a century (they only have the 1971 title in their showcases).

The Milwaukee lost the first two games of these Finals,but they have recovered in a big way by taking the next three.

The latter was not an easy victory, since after dominating the duel from the second quarter the Bucks saw how the Suns were one point behind and with possession to win with just 29 seconds left in the fourth quarter.

But in the key play of the game, Holiday stole the ball from Booker and gave Antetokounmpo a counterattack alley-oop., who also had an additional free kick.

The Greek failed from the personal, but he grabbed his own rebound and Middleton was in charge of closing the meeting.

In a fifth game with a very high score, the Bucks dominated the rebound (46 for 39) with 11 of them attacking (8 for the Suns).

Until the last bars of the meeting, the Suns missed the best version of Chris Paul, which in the end finished with 21 points and 11 assists and which was key to trying the local comeback.

The Suns will have to win on the road Tuesday in Milwaukee to force a Game 7 to be played Thursday in Phoenix.