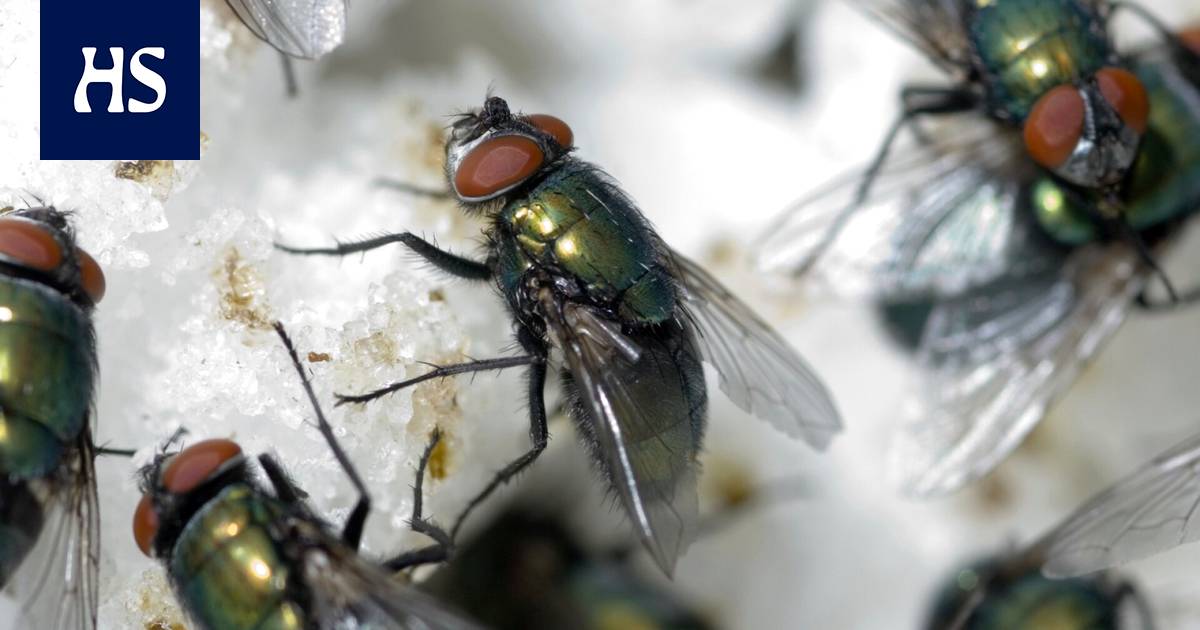 More than 4,000 fly species live in Finland. Few people are interested in a living person, perhaps just his sweat. The fly fly first arrives at the deceased – perhaps also at the crime scene

Flies are part of the summer. There are many, many think too many.

The proverb also says that “summer would come and flies”. It is better understood if you know how the proverb continues: “so would make the poor friends.”

There are at least flies waiting Jere Kahanpää, which is one of Finland ‘s leading flea experts and researchers.

Birds first, there would be much less without flies.

“There are birds that get a lot of their food from flies,” says the fly researcher in the courtyard of the Natural History Museum.

Sunlight filters into the yard just right. Kahanpää invites you to look at the beam of light. That’s a bustle of insects.

“Most of those are flies.”

We are right in the heart of Helsinki. The number of flies on the asphalt and concrete is not understood.

“There can be a thousand flies per square meter,” Kahanpää estimates. Then the flies moving in the soil are also included.

Flies also not perceived as pollinators. Glory has gone to bigger spinners and butterflies.

“As an apple tree pollinator, for example, flies are important. A fly likes to eat pollen.”

Pollen spreads to the environment in a fly’s legs and body as it searches for more food.

There are still good aspects of flies: fly larvae are also farmed in Finland as baits for fishermen. In the world it is big business.

Carnivore on the wing feathers of a hand. Picture: Kimmo Taskinen / HS

From Finland more than 4,000 species of flies have already been found, ranging from the coastal waters of the archipelago to the highest slopes of the fells.

In the summer, therefore, there is no nook in Finland where there are no flies. Kahanpää wonders that perhaps flies could escape on the high seas.

There are so many species in Finland that there are many misconceptions. Different species have their own specialties.

Carnivores first arrive at the dead.

Sadly firstly, carnivores have been considered. In Finland, carnivores are Lucilia-sukua. There are several species, such as Lucilia Silvarum.

“There are only a few species of carnivores out of thousands of species in Finland,” says Kahanpää.

To the family of carnivores Calliphoridae belongs to 1,100 species worldwide.

Winter eggs hibernate in a grove or litter, for example. When the temperature rises to a suitable level, the larvae hatch. Some species fetch indoors in the fall and look for eggs for wintering.

Carnivore lays on wounds and mucous membranes, for example. It favors openings in the skin layer of any animal because it lays eggs in the holes of the body.

In moist cavities it is good for eggs to develop, in a wound or also in the mouth, nose or lips, and at the same time in the shady.

Even people have these places. The carcass therefore disturbs some people, especially those who have been injured – but especially the dead.

Dying human flesh is a good place to lay eggs.

Carnivores first arrive at the deceased, or perhaps also at the crime scene if nothing detains them. May the forensic investigator sometimes use a carnivore to determine quite precisely the moment when the crime was committed.

Flies can smell Kalma from miles away. They therefore smell the substances that a dying cell begins to release quickly when it breaks down.

“When a fly’s flight speed is comfortable at 25 to 30 kilometers per hour, it doesn’t take long for the fly to already settle in the egg carcass,” says Kahanpää.

Carnivores, as the name implies, are fast and first on the carcass, but are followed by sock flies.

As the carcass breaks down further and as the residue becomes liquid, it will be eaten by juice and fruit flies.

A few species of flies also find food in their feces.

For well-being and it is difficult for a summer vacationer accustomed to sewers to settle into the air of an outer husk, especially if the hood is old. The smell disturbs, but equally the outdoor toilet flies.

They are certain sock flies. Such is, among other things, the house fly.

After removing the wooden cover, few want to sit with the flies for a long time, for example, browsing through 1970s magazines.

Kahanpää replies accustomed to this: “A few species of flies also find food in their faeces. But they can be counted with the fingers of one hand. ”

Back in the 1950s, outdoor toilets were quite common in Finland, also in urban wooden house blocks. There also comes a bad reputation for manure flies.

The flies spread the bacterium, which in turn spread typhoid. It affected thousands after the wars and killed hundreds.

Unfortunately, in part, the same flies apply sweat to the skin. It attracts people. The sweat of a fly smells like the salts that flies need, like all living things.

“All fly species spend a lot of time cleaning up.”

General the misconception is that this species spinning in the huss would find its way to the dining tables as well. This is not the case. Other fly species are looking for sweet or savory food.

If you want to avoid a fly on the edge of your drinking glass or plate on the terrace, Kahanpää gives a recommendation: for flies, make your own jar for sweet or savory.

When the fly settles on the edge of the bait jar, it can be observed. How beautiful is its metallic surface, bluish or greenish. At the same time you can follow when the fly cleans itself, like a cat.

“All fly species spend a lot of time cleaning up,” Kahanpää says.

Flies constantly rub dirt and pollen off their feet. If you are accurate, you can also see how they quickly squeeze the wings with their feet as well.

When tidying up the fly itself remains alert.

Many have tried to grab the fly with their palms alive, but few succeed. If the hand is allowed to move very slowly near it from the back side, then maybe you can get it.

The fly reaction time has been measured, says Kahanpää. That’s less than a hundredth of a second. The person begins to react in just over a second in two hundredths.

In general, the fly can see the movement behind it. You can also see its big and beautiful meshes curved back a bit.

Some species can not only hover in place, even fly backwards. Even a dragonfly, considered the master of flying, is second in that skill.

So the fly sees everything. When threatened, it instantly pops up on its wings and disappears into new edges.

Read more: Where do the ugliest sparrows occur? There are more than 40 species of mosquitoes in Finland, and some of them are particularly bloodthirsty.