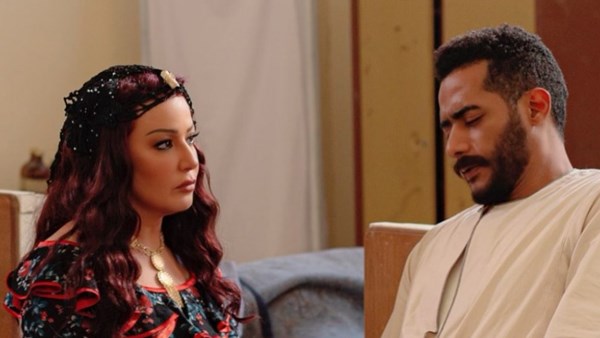 Mohamed Kenawy (Cairo)
The Egyptian star Sumaya El Khashab confirmed that her return to the Ramadan drama through the character of “Their Sweetness” in the series “Moussa” in front of the star Mohamed Ramadan is a strong comeback and compensates for her Ramadan absence for two years since she presented the “Halal” series, and she expected that the character of “Their Sweetness” would provoke positive reactions. With the audience.
Sumaya added: Their sweetness begins from the ninth episode – on Tuesday – after “Moussa” escaped from Upper Egypt after tightening the screws on him, whether from the village mayor or from the British and chasing after him, he goes to Cairo and there he meets their “sweetness”, a very strong and sharp woman working in the market. Very in her commercial dealings, but at the same time very tender, and this is what linked me to their “sweetness” personally, as soon as she gets to know Moses, she lives with him a love story, to confirm that any six as long as she finds a man who appreciates her in the meaning of the word, she lives for him and for him.
Sumaya al-Khashab told “Dunia Al-Ittihad” that she considers the character of their “sweetness”, the best thing that happened to her this year, which is a character with multiple and different qualities and feels very close to her, so she was enjoying every scene in her in an unnatural way during filming, which is a different type of roles. The girl who sacrificed and beautiful country and her details are very pivotal in the events and influential she was attracted to her from the first moment.
Sumaya said: This series is the first meeting I have with the artist Muhammad Ramadan, and when the producer offered me the participation in the series, and I met the scriptwriter Nasser Abdul Rahman, and he gave me an idea about the character and the work as a whole, I asked the readers of the entire script before settling my position despite my admiration for the idea and within only two days I finished reading The thirty episodes and I was really excited about it.
Director Mohamed Salama told me: “There is no one in Egypt who will know how to do their sweetness but you.” This sentence made me very happy for his great confidence in me, and after I gave my final approval, the artist Muhammad Ramadan called me and said, “I am honored to cooperate with you in the Musa series.” Elements, and we started the preparation phase and filming.
Al-Khashab continues, saying: “During the filming period, the artist Mohammed Ramadan and I came to terms with us in an extraordinary way and he is a wonderful star,” noting that the series is characterized by calm, the atmosphere of love and brotherhood among all the staff, and I am happy to go through this experience, and frankly Muhammad Ramadan was a surprise to me because we did not present. Businesses together before.

A husband is suing his wife for insulting him in harmful terms ... and the trial announced her innocence

The fourth wave of the coronavirus in Spain subsides