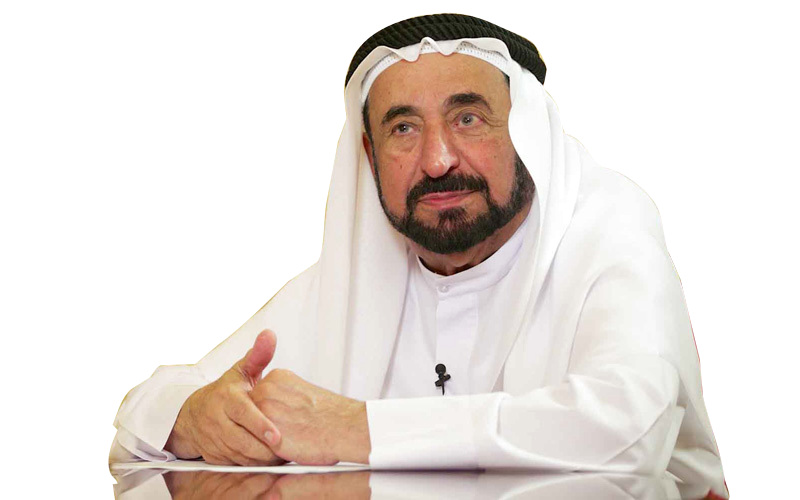 His Highness Sheikh Dr. Sultan bin Muhammad Al Qasimi, Supreme Council Member, Ruler of Sharjah, President of the University of Sharjah, witnessed this afternoon the ceremony of handing over the first honorary doctorate degrees from the University of Sharjah to Her Highness Sheikha Jawaher bint Muhammad Al Qasimi, President of the Supreme Council for Family Affairs in Sharjah and Minister of Health and Community Protection Abdul Rahman bin Muhammad Al Owais and Director Executive Director of Al Qassimi Hospital, Dr. Arif Al Noryani, in the main building of the University in Sharjah.

The attendees watched a documentary film about the handing over of His Highness the Ruler of Sharjah to Her Highness Sheikha Jawaher bint Muhammad Al Qasimi an honorary doctorate, which was awarded to Her Highness in recognition of her distinguished humanitarian and social achievements locally, regionally and globally, and her pioneering and qualitative initiatives, including her establishment of the Sharjah Ladies Club, and the Supreme Council for Family Affairs, which oversees a network of The important institutions and associations that serve the social sector in the Emirate of Sharjah and enjoy the generous care and follow-up of Her Highness.

For her part, Her Highness Sheikha Jawaher bint Muhammad Al Qasimi, in her speech on this occasion, extended her deepest thanks and gratitude to His Highness Sheikh Dr. Sultan bin Muhammad Al Qasimi, the Board of Trustees of the University of Sharjah, and the University of Sharjah administration for granting Her Highness this prestigious and prestigious degree that she is proud of because it was awarded to her by the University of Sharjah. She has a distinguished scientific and academic standing at the local, regional and international levels, stressing that this honor represents a strong motivation to continue with more humanitarian, social and scientific endeavors.

His Highness the Ruler of Sharjah handed over the Minister of Health and Community Protection, Abdul Rahman bin Muhammad Al Owais, and Dr. Arif Al Nouriani, honorary doctorate certificates, congratulating them on this achievement and thanking them for their great efforts and wishing them success and payment.

The ceremony of awarding honorary doctorate degrees included a presentation of the rationale on which the University of Sharjah relied in awarding honorary doctorate degrees by the University’s Board of Trustees in accordance with the university’s regulations, including that they be awarded to a well-known and recognized person for excellence, and that constitutes a source of appreciation and inspiration for society, future generations, and academic workers, and that This person shall have made exceptional and distinguished achievements in scientific, social, economic or humanitarian giving, or contributed nationally and globally.

Her Highness Sheikha Jawaher bint Muhammad Al Qasimi was awarded an honorary doctorate, based on her achievements at the scientific, social and humanitarian levels, locally, Arably and internationally. Her Highness was locally awarded the Order of Pioneers of Work in the Arab World in appreciation of her role in social work and unlimited giving in the service of women’s issues. She was honored by Her Highness Sheikha Fatima bint Mubarak, President of the General Women’s Union, President of the Supreme Council for Motherhood and Childhood, Supreme Chairwoman of the Family Development Foundation “Mother of the Nation”, during the Arab Women’s Day celebrations in Abu Dhabi in 2002 AD, the Latifa bint Mohammed Award for Childhood Creativity 2006 AD, and the Medal of Volunteer work in Sharjah in 2006, the Emirates Business Women Award 2007, and the International Award of Sheikha Fatima Bint Mubarak for Arab Youth, as the most supportive person for youth issues in the United Arab Emirates in 2014.

And in the Arab world, Her Highness Sheikha Jawaher bint Muhammad Al Qasimi received the Shield of Loyalty and Giving in appreciation of her outstanding efforts and unlimited giving for the advancement and renaissance of Arab girls and women from the Arab Regional Office for Girl Guides in Tunisia in 2007, and the First Arab Lady Award in Support of Arab Women and Family Issues in its fourth session of 2007 From the Arab Women’s Participation Studies Office in Paris.

Her Highness also received the Most Inspiring Personal Arab Woman Award in 2013, and the King Abdullah II Award for Creativity, the eighth session “2015-2016” for the research presented by the Department of Health Education in Sharjah on “Sharjah’s creative role in child care.” The trustees of the Sharjah Award for Educational Excellence and Excellence, Her Highness Sheikha Jawaher bint Muhammad Al Qasimi, awarded the Educational Personality Supporting Education Award in the “25” edition of the award in 2019, in appreciation of Her Highness’ efforts and role in developing the educational system.

At the global level, Her Highness was awarded the title of “Eminent Advocate” from the United Nations High Commissioner for Refugees in 2013, in appreciation of Her Highness’ constant keenness to provide the best to help the less fortunate around the world and support people in crisis from poverty and war, and the Golden Pea Award from the German Cultural Center for Children’s Stories, In recognition of her efforts in humanitarian and social work and her advocacy for refugee children, the needy and cancer patients, and her launch of initiatives that support the empowerment of women in all fields at the level of the United Arab Emirates, the Arab region and the world, and the Princess Benedict Award from Denmark, for her great contributions to the development of girls through her continuous support for the Olaf Biden Powell Association She is affiliated with the World Bureau of Girl Guides in Copenhagen in 2007, and is the ambassador of the International Federation against Childhood Cancer.

The award of an honorary doctorate degree comes to the Minister of Health and Community Protection, Abdul Rahman bin Muhammad Al Owais, in his capacity as one of the loyal and loyal men of the nation who contributed with a great deal of loyalty and creativity to the rehabilitation of everything that supports the nation’s march and its aspirations and major goals in national development and its various horizons, especially in service, care and development society, and work with all that is necessary to achieve development strategies with global goals and dimensions in its modern and civilized framework.. and in appreciation of its distinguished national role in all positions that have been associated with sincere achievements and works for the advancement of this country, as well as its efforts and initiatives in addressing the consequences of the (Covid-19) pandemic. And the wise and thoughtful measures that were taken in dealing with the circumstances surrounding this global epidemic.. Al-Owais was also known for his love of Arab art, his support and sponsorship of literary and historical works, artworks, and international competitions.

As for the Executive Director of Al Qassimi Hospital in Sharjah, Dr. Arif Al-Norianin, the university granted him this degree in appreciation and pride for what he gave to his country in all its categories, based on his knowledge, experience, skills, medical and cognitive excellence, and what he made of a scientific and practical process, and a full message confirming the distinction of his exceptional role in the renaissance and progress of the medical sector in The United Arab Emirates, keeping pace with global modern technological development.

Al-Nouriani’s record includes medical achievements that include performing complex surgeries, which made him worthy of obtaining many awards and honors at the local, regional and international levels, including winning the Arab Doctor Award for the year 2020 in February of last year by a decision of the Executive Office of Arab Health Ministers, which He decided to give him this award.

For his part, the Minister of Health and Community Protection, Abdul Rahman bin Muhammad Al Owais, stressed in his speech that the insightful vision of His Highness the Ruler of Sharjah over the past four decades, in various walks of life, was to open wide horizons for development and advancement for all members of society, as His Highness is an educator of generations, and a maker of culture. and the Renaissance.

Al Owais pointed out that His Highness the Ruler of Sharjah was and is still present as a father, teacher, mentor and honour, since the Sharjah project is building the human being, pointing out that he is proud and proud of being one of His Highness’ school students.

For his part, Dr. Aref Al-Nouriani, in his speech, offered his highest thanks, appreciation and gratitude to His Highness, the Ruler of Sharjah, and the Board of Trustees of the University of Sharjah, for the great honor of awarding him an honorary doctorate, which represents an appreciation for all the scientific community and the medical sector in the country.

Al-Nouriani valued the unlimited support of His Highness the Ruler of Sharjah for the health and medical work in the emirate and its staff, encouraging them and following them up, and His Highness’s support for Al Qassimi Hospital in particular, and its provision and promotion with the latest medical devices and according to innovative technologies, which made it a prestigious medical center for community service.