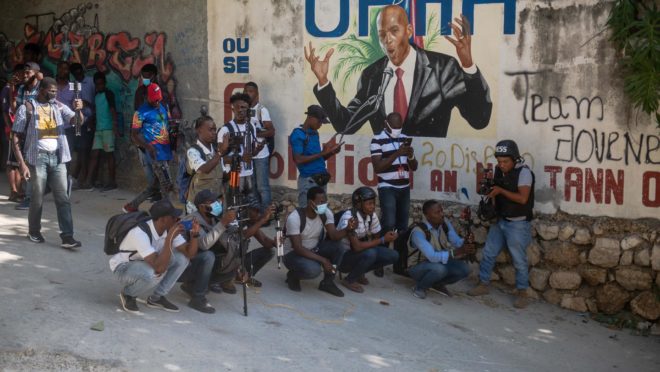 0
SHARES
2
VIEWS
Share on FacebookShare on Twitter
Journalists gather near a mural with the image of the president of Haiti, Jovenel Moïse, who was assassinated this Wednesday in a street in Port-au-Prince| Photo: EFE/ Jean Marc Herve Abelard

After the death of Haitian President Jovenel Moïse, who was shot to death in his home early this Wednesday, Haitians are wondering who will govern the country next, but it is still unclear how the process for naming the next will take place. head of the Haitian Executive.

The assassination of Moïse, who has been president since 2017, takes place two months before the presidential and legislative elections called for next September 26, elections in which Moïse could not stand.

Interim Prime Minister Claude Joseph has declared that he is in charge of the country. He described Moise’s murder as an “inhumane and barbaric” act. For him to become interim president, parliamentary approval would be required; however, as parliament was dissolved in January due to the lack of recent elections, this is unlikely to happen.

Claude Joseph, in declaring a state of siege in Haiti, guaranteed that “all measures were taken to ensure the continuity of the state. The announcement was made in a televised speech, alongside the director of the National Police, Leon Charles, and other authorities, after presiding over an extraordinary Council of Ministers.

According to local media, the next in line would be the president of the Cour de Cassation, the equivalent of the Supreme Court in Haiti. However, the last person to hold that position was Rene Sylvestre, who died from Covid-19 last month, reported the Haitian Times. The post has been vacant since then.

What does the Constitution say?

Article 149 of the Haitian Constitution, drafted in 1987, and amended by an amendment in 2012, governs that, in the event of a vacancy in the Presidency of the Republic “due to the resignation, dismissal or permanent physical or mental incapacity of the president, duly verified, the Council of Ministers, chaired by the Prime Minister, will exercise the Executive Power until the election of another president”.

For 2021, the previously postponed legislative elections are planned, as well as the convening of presidential elections for September and November, in which Moïse could not participate. The president had called for the same date a referendum to approve a new constitution, a project that did not have the support of the opposition or the international community.

With strong opposition from various sectors who wanted Moïse to leave power on February 7, 2021, faced with a different interpretation of his presidential term, which he considered to end in 2022, the Superior Council of the Judiciary issued a resolution that day declaring that his term had ended.

At the time, when the opposition even named magistrate Joseph Mécène Jean Louis as interim president, Moïse called the decision an attempted coup.

In June 2021, the president called for international support and collaboration from all sectors of society to end the escalation of armed gang violence.

Two days before he was killed, Moïse appointed Ariel Henry as the new prime minister, with the task of forming a consensus government that would integrate different sectors of the country’s political life. The fifth appointed by Moïse for the post of prime minister was expected to face the serious security crisis and support the organization of presidential and legislative elections.

The president mentions the appointment in your last post on Twitter, made on July 5th. “I have appointed citizen Ariel Henry to the post of Prime Minister. He will have to form an open government including the vital forces in the nation, solve the problems of insecurity and support the holding of general elections and the referendum.”