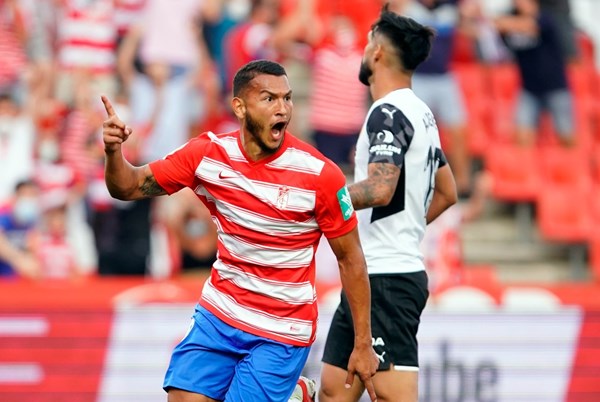 Although Uruguayan Luis Suarez did not start his “counter” of goals with Atletico Madrid this season, in the Spanish league “La Liga”, there is another Luis Suarez who is currently scoring goals, and he is the Granada striker who seeks to follow in the footsteps of those who bore this name in world football.
Colombian striker Luis Suarez managed to lead Granada to a 1-1 draw against Valencia, after scoring his team’s goal in an exciting match in the “La Liga”, so it seems that the “23-year-old” is following in the footsteps of the scorers who carried this distinguished name.
The current Granada striker Luis Suarez went on loan for several seasons in the second division with Real Zaragoza and the reserve of Valladolid, before joining the Andalusian team on a permanent contract in 2020, and began to get his chance more this season.
Luis Suarez, the current Atletico Madrid and former Barcelona striker, is one of the prominent names on the world stage in the last decade, the most famous among the current generation, although he did not start his career with Roji Blancos this season.
Luis Suarez was the top scorer of Spain and Barcelona in the fifties and sixties of the last century, and succeeded in leading Inter Milan to win the Champions League and his country to win the European Championship.
Luis Suarez from Colombia is also in the world of football at the moment, where he is the coach of the Costa Rica national team.
It is noteworthy that Suárez is the name of a family that moved to South America through Spanish explorers, and it means “sugar man”, and their origins go back to the Asturias region in northwest Spain, whose most famous birth is Luis Enrique, Fernando Alonso, Juan Mata and David Villa.