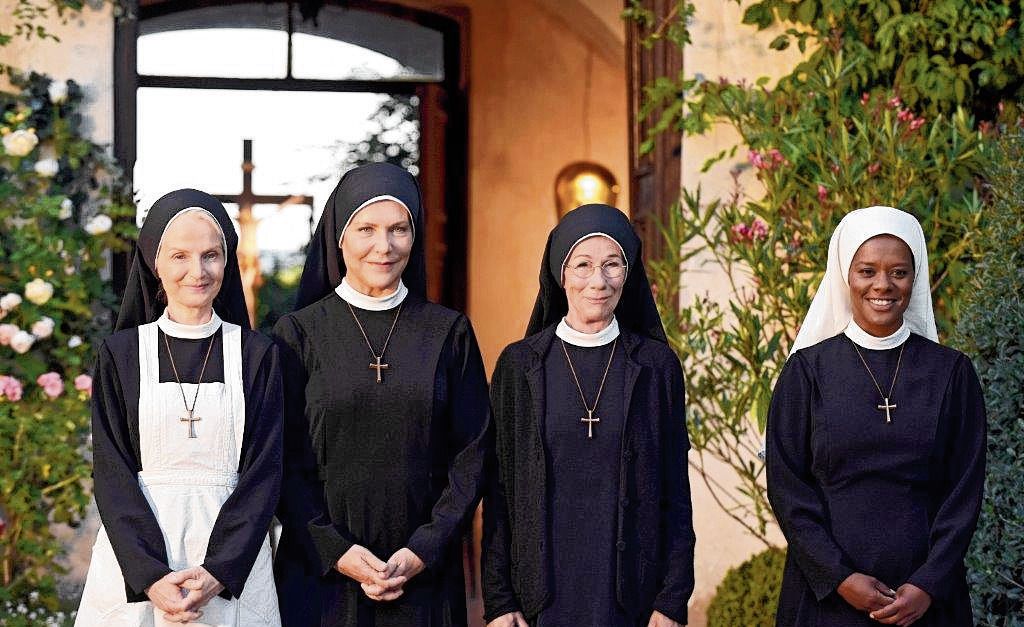 Five penniless, stubborn nuns and a dog, ‘Herr Hund’, in an oversized monastery in a small fictional Bavarian village, Kaltentahl, in perpetual conflict with the mayor. That’s the basis for the sitcom Um Himmels Willen (For heaven’s sake), which in the past twenty years has grown into one of Germany’s most popular TV series – and which broadcaster ARD now has to stop.

The nuns are contemporary: there’s a gambling-addicted nun, an unwanted pregnant nun, a smoking nun, a vegetarian nun who makes dirty sandwiches, a podcast nun who wants more women in church—all of which lead to comical squabbles. Constante is fighting the non-believing mayor, played by Fritz Wepper, also known as Harry Klein from Derrick. The 80-year-old plays the grumpy, unscrupulous mayor with gusto. His attempts to turn the monastery into a new casino, new hotel, new luxury villa complex, new electric battery factory always fail in the nick of time, especially at the hands of Sister Hanna (Janina Hartwig), who drives around in a dilapidated black Mercedes.

The humor in Um Himmel’s Willen – one of the nuns is writing a love novel, a porn publisher is interested – does not obscure social problems. The black nun, Sister Lela (Denise M’Baye), faces racism. Poverty, homosexuality, domestic violence and fat shaming are discussed. Usually in the form of a fellow villager who comes to ask Sister Hanna for advice. Although prayers are sometimes made, and as a greeting “Lobbed Jesus Christ!” sounds, a sober practical spirit predominates in the monastery. Sister Hanna and her nuns possess “the divine power of creativity” to deal with their everyday problems and those of their fellowmen, said the creator of the series, Michael Baier, ever.

Yet broadcaster ARD thinks it’s enough now. They want something new. The weak health of star player Wepper will also count. So it ended on Tuesday evening, June 15 (ARD, 8:15 PM). Then the last episode airs. With an average of more than 7 million viewers in 2012, it was Germany’s most watched TV series. And that while Germany is becoming less and less Catholic, especially after the recent abuse scandals. Anyway, Um Himmels Willen was not a public relations show for the church, but a sitcom about how the traditional, village world clashes with modern times.

And Um Himmels Willen is according to news agency DPA also a continuation of Heimat films, a film genre popular in Germany after the war. It sketched an ideal image of the country, in a beautiful landscape (just like in westerns in the US), with drama about contrasts such as city and countryside, tradition and modernity, young and old. And it always ended well. The world may have been broken for a while, but it was made whole again. That’s how it goes in Um Himmel’s Willen: problems are solved, gaps are bridged. It is a ‘Heil WorldTV series, according to DPA. And there are fewer and fewer of those on German TV, where crime series dominate.

The actors had to shed a tear on the last day of shooting. Sister Hanna actress Hartwig (60, born in East Germany) told in an interview that she now finally has time to learn English: “As a GDR child, I never learned that well.”

A version of this article also appeared in NRC in the morning of June 15, 2021