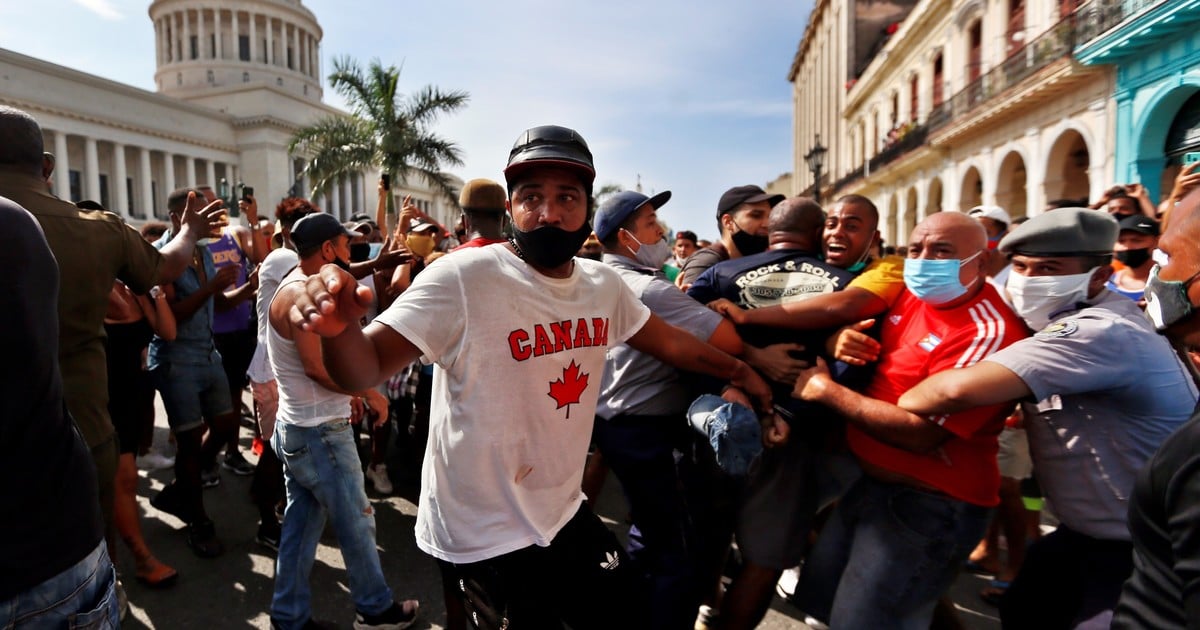 The Inter-American Press Association (IAPA) condemned this Thursday the “new thrust” against freedom of expression in Cuba, after the approval of a decree that increases the “control and restrictions on the use of the Internet and social networks” on the island.

This is Decree-Law 35/2021, a series of measures that the regime headed by Miguel Díaz Canel launched this Wednesday in response to the peaceful anti-government protests that began on July 11.

The new regulation on “Telecommunications, Information and Communication Technologies and the use of the Radioelectric Spectrum” establishes 17 “cybersecurity” crimes.

Thus, the call for demonstrations is considered a crime of “cyberterrorism” and the publication on the web of content considered subversive is classified as a highly dangerous incident.

A detainee during the marches in July. Photo EFE

Honduran Jorge Canahuati, president of the IAPA, described this decree as a “new thrust against freedom of expression,” a regulation elaborated with “ambiguous language that imposes greater limits on social networks.”

Canahuati stressed that “these (social networks) have become the main means that citizens use to disseminate and consume information.”

“The approval of this new provision is the desperate reaction of a controlling and cornered regime“, said, for his part, the Argentine Carlos Jornet, president of the IAPA’s Committee on Freedom of the Press and Information.

The call for marches and the publication of “subversive” content are considered crimes. Photo EFE

Jornet pointed out that this measure is in addition to the “laws and decrees that already exist in Cuba to sanction journalists, activists, citizens and all positions critical of the official one.”

The “intimidation against the population and independent journalists” due to the use of the Internet is not new in Cuba, the IAPA said in its statement.

The entity has been denouncing in its semi-annual reports the state monopoly of the Cuban Telecommunications Company (ETECSA) as the executing arm of the restrictive policies of internet and telephony services.

The Chapultepec 2020 Index, an IAPA measurement tool on freedom of expression in the digital ecosystem, places Cuba, along with Nicaragua and Venezuela, among the countries whose governments censor the digital space through blockades, hacks and the threat of criminal penalties.

Several police officers from a special brigade are transported by vehicle through a street in Havana (Cuba), at the checkpoints after the protests. Photo EFE

The battery of norms was approved in Cuba this week. Among other points, “defamation of messages against the State” and “incitement to mobilizations” are considered as infractions of the law.

“For the first time, the country will have a legal norm where cybersecurity incidents and typifications that exceed the limits of technology are associated,” explained the director of cybersecurity of the Ministry of Communications of Cuba, Pablo Domínguez Vázquez, in a conference of official press.

The United States sanctioned Thursday three senior Cuban officials, in the fourth round of punitive measures in response to the “violent repression” of anti-government demonstrations.

The sanctions, applied under the Global Magnitsky Law, which allows the punishment of those who have committed human rights abuses in other countries, represent the freezing of any property in the United States and prohibits any transaction through the US financial system.

Protests in Miami against the Cuban regime. Photo EFE

Washington “will continue to hold accountable those who allow the Cuban government to perpetuate human rights abuse,” said Andrea Gacki, director of the Treasury’s Office of Foreign Assets Control (OFAC).

“This measure exposes more perpetrators responsible for suppressing the calls of the Cuban people for freedom and respect for human rights,” he added.

Legra is deputy chief of the General Staff and head of the Revolutionary Armed Forces (FAR) Operations Directorate, which during the protests deployed the Prevention Troops (TDP), a unit of the military police. González is the head of the Central Army, and Jiménez, the director of prisons in Cuba.

“The Cuban security forces have more than 800 people arrested in response to the protests, many of which are being held in ‘preventive detention’ and the whereabouts of several people are still unknown, “the Treasury said in a statement.

“Dozens of people have already been sentenced to up to one year in prison or correctional work as a result of summary trials,” he added.

President Joe Biden warned Havana that there will be more sanctions “unless there is some drastic change in Cuba.”