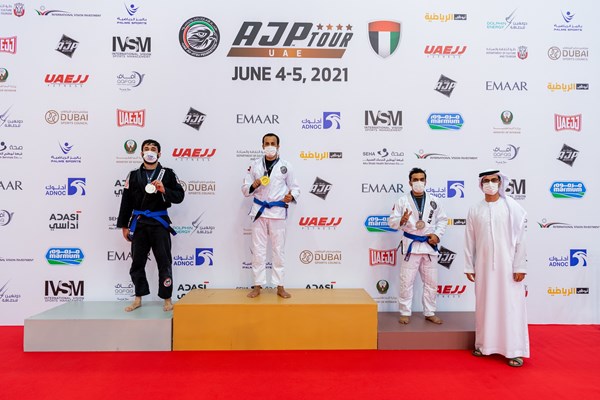 Rashid bin Hamdan Hall at Al Nasr Club in Dubai witnessed strong competitions on the first day of the Emirates National Championship for Professional Jiu-Jitsu – Dubai, organized by the Jiu-Jitsu Federation in cooperation with the Abu Dhabi International Professional Association, amid the participation of a group of local and international players of various categories, belts and age stages.

The competitions of the first day were characterized by exciting confrontations, heated fights and high technical levels that kept pace with all aspirations, and translated the reality of this sport, which is witnessing continuous development and great growth within the country.

With the curtain coming down on the competitions of the first day of the championship, which was allocated to the white and blue belts, the Sharjah Self-Defense Sports Club shone in first place with 37,500 points, and Al Ain Ju-Jitsu Club came in runner-up with 16,300 points, then Palms Sports Academy in third place. With a score of 14,400 points, with the participation of a large number of stars and starlets from different countries of the world.

The tournament is included in the annual classification approved by the Abu Dhabi Professional Jiu-Jitsu Association, as it grants the first-place winner 1,000 rating points for each category, which enhances its importance and position for professionals.

Mubarak Al-Menhali, Director of the Technical Department of the Jiu-Jitsu Federation, thanked and appreciated the management of Al-Nasr Club and all the parties that contributed to the organization of the tournament, in light of the application of all strict precautionary measures adopted in the health protocol to preserve the health and safety of the players, which represents the highest priority of the Federation.

Al Menhali stressed that the UAE National Professional Jiu-Jitsu Championship in Dubai is a unique product that enriches the Federation’s agenda, and makes way for a group of emerging talents to emerge, and to interact with elite players from different countries of the world, in a way that is reflected on the general level of UAE players.

Al Menhali explained that the federation’s agenda is rich with its activities and tournaments that are held throughout the year, which contributes to the players enjoying the full readiness required to participate in the upcoming entitlements.

For his part, Tariq Al-Bahri, Director of the Abu Dhabi Professional Association, said that the tournament is a fruit of the common vision and constructive cooperation between the Association and the Federation, pointing out that next July will be the date for one of the important Abu Dhabi International Professional League tournaments on the continent, which gives participants the opportunity to obtain 1,400 Classification point, details of which will be announced at a later time.

Al-Bahri thanked the players and clubs for their commitment to applying the health protocol with the highest degree of accuracy, expecting that the competition will be stronger on the final day in the belts from purple to brown and black.

Commenting on the tournament, Ibrahim Al Hosani, coach of the national junior team, said that the plans of the Jiu-Jitsu Federation are mainly aimed at developing the level of players because they form the nucleus of this sport, and that the past year, and the interruption that took place due to the health conditions that afflicted the world, greatly affected the physical readiness. For players, this explains the union’s keenness to organize the largest number of tournaments this year to help players return quickly to their usual levels.