Storm in Germany: the number of deaths increases every hour – Merkel addresses victims in a shaky voice 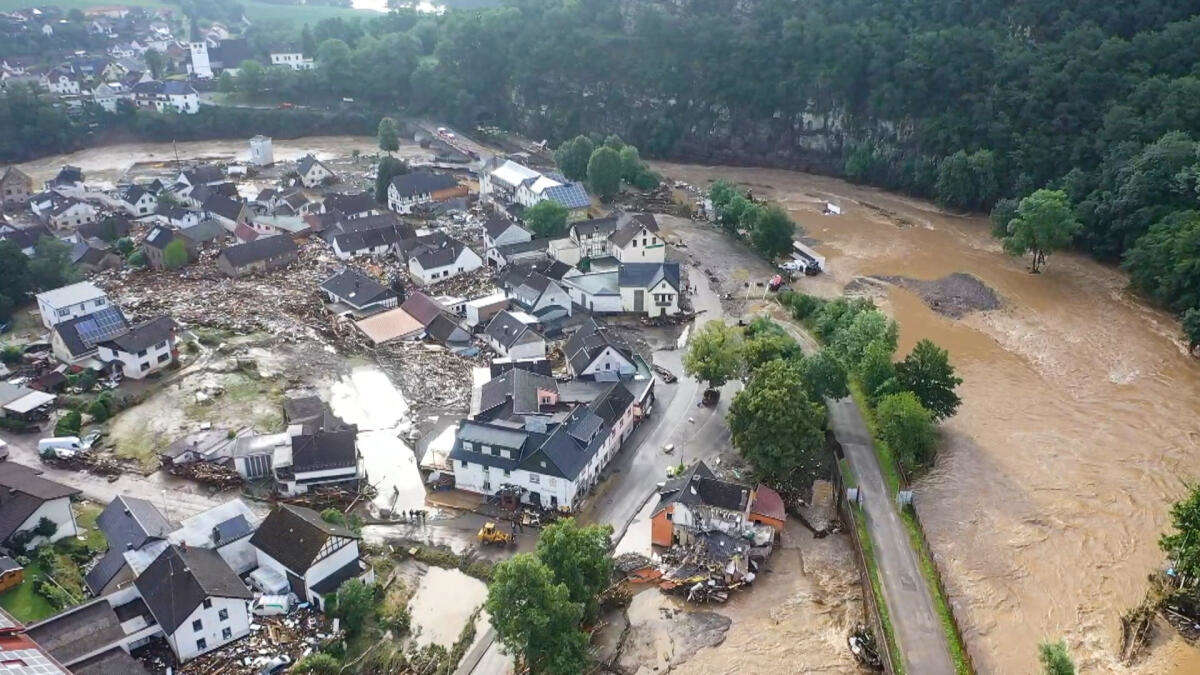 The number of storm deaths in Rhineland-Palatinate and North Rhine-Westphalia continues to rise after the terrible flood. The news ticker for the natural disaster in Germany.

Update from July 15, 6:15 p.m.: The Eifel between Rhineland-Palatinate and North Rhine-Westphalia is badly hit by the flood disaster *. Pictures from the region document the extent of the destruction caused by the flood – and the use of a police helicopter to rescue residents (see link).

Update from July 15, 4:25 p.m.: Chancellor Angela Merkel (CDU) comments on the flood disaster in the Eifel. “My thoughts are with the people in the flood areas in North Rhine-Westphalia and Rhineland-Palatinate”, says the German head of government with obviously wet eyes and reports of “many video messages from European colleagues showing solidarity with Germany”.

Storms / floods in Germany: Angela Merkel speaks to victims and relatives in the Eifel and North Rhine-Westphalia

“Heavy rain and floods” “only insufficiently describe” what the people in the Eifel had experienced, she explains: “I am shocked by the reports from the places that are under water. In which people are rescued from the roofs of their houses. ”There have been deaths, reports the Chancellor, and the relatives have“ deeply felt sympathy. Everything is done to find the missing ”.

Merkel’s voice trembles several times during her statement. She thanks the helpers for their “tireless efforts. I would like to thank the helpers from the bottom of my heart for their commitment, which we know is very dangerous ”. It was “terrible days for the people in the flood areas. All the forces in our state will do everything in their power to save lives, ”she explains. Merkel further describes that after the devastation and damage she had already held talks with the Federal Minister of Finance about possible financial aid. At the moment, however, the “need to save human lives wherever possible” has priority. After a few minutes, their statement was over.

Update from July 15, 4:20 p.m .: Chancellor Angela Merkel (CDU) * wants to speak this afternoon about the floods in Germany, with a focus on the Eifel in North Rhine-Westphalia and Rhineland-Palatinate. The time of the statement by the head of government is not yet known. The fact is: the devastation and damage in many towns and cities is enormous.

Update from July 15, 4.10 p.m.: The most important things in brief: A bad flood in Germany * devastated large parts of the Eifel between Rhineland-Palatinate and North Rhine-Westphalia between Wednesday and Thursday. There were also floods and landslides in other cities and districts of North Rhine-Westphalia. As of Thursday afternoon, the natural disaster cost at least 42 people their lives. Dozens were still missing at the time. Thousands of helpers from fire brigades, THW, Bundeswehr and police are on duty. Individuals in enclosed towns are rescued from roofs by police helicopters.

First report from July 15th: Munich / Koblenz / Euskirchen – After the police in Koblenz in Rhineland-Palatinate had initially reported five deaths after the flood in the Bad Neuenahr-Ahrweiler area with the severely affected municipality of Schuld *, they reported the number of 18 deaths on Thursday afternoon. A police spokesman wanted to talk to the news agency AFP do not provide any information as to where the additionally reported dead were found. He was obliged to initially only report the increased number of deaths.

Storms / floods in Germany: Dozens of people missing after the disaster in the Eifel

In the circle, up to 70 people were initially thought to be missing. This number is now likely to be lower, said a police spokesman about the rescue measures.

The consequences of the flood disaster remained unclear in many places on Thursday because power and telephone lines had failed. The Euskirchen district in North Rhine-Westphalia reported at least eight deaths * without giving any details about these cases.

In the video: Dozens of people missing after flooding in the Eifel

As the Cologne police announced, three other people died in the Rhein-Sieg district in Rheinbach. In Euskirchen, the number of deaths has risen to 15. “We have never seen such a catastrophe. It is really devastating, ”said the Rhineland-Palatinate Prime Minister Malu Dreyer. Your state is also badly affected. (mk) *Merkur.de is an offer from IPPEN.MEDIA