Storing rainwater for bathing: when in Caracas not a drop comes out of the pipes 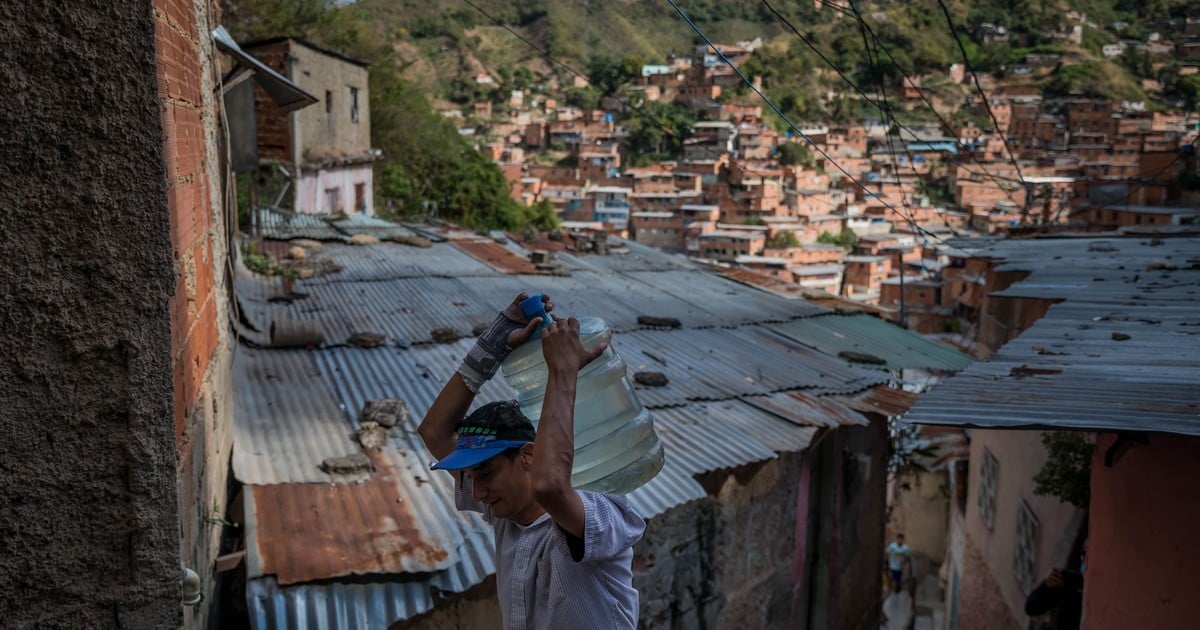 Jeanette Celis longs for the rain to fall on Caracas’ depressed La Vega neighborhood one afternoon in late February. The water has not come out for months when you open the taps, as in most of VenezuelaAnd the one that falls from the sky could well fill the half dozen empty tanks you have at home.

On the roof of your house, a sheet of zinc transformed into a channel is capable of collect rainwater and divert it to a huge tank that you have outside the home.

“My husband is very intelligent to do these things,” Celis tells the EFE agency, showing the rudimentary system, which is repeated in all the houses in La Vega.

“He managed to do this, (but it works) more than anything when it rains. Piped water is impossible (to have),” adds the 41-year-old woman.

The problem is not only of this family. Independent organizations point out that almost 9 out of every ten households in Venezuela face a drastic shortage of potable water, which adds to the lack of gas and blackouts that are repeated almost daily throughout the country.

Several meters higher, her neighbor Kimberly Bruzual tells EFE that she does not remember the last time that the water filled the pipes of her house and that she is without reserves because the rain that she was able to collect was spent a long time ago.

The lack of running water, a problem that affects almost 90% of the population in Venezuela. Photo: EFE

To alleviate the shortage, the 19-year-old has had to look for water in the lower part of the hill, where every so often a tanker truck carries several thousand liters that must be shared among the families of the neighborhood.

That water has to be “reused”, this woman, a mother of a boy who does not reach two years, tells EFE.

“I bathe the child with clean water, that water later I use to wash the diapers and after that I throw it in the bathroom,” he explains.

Bruzual also said that the water that he raises with the cistern or in a neighbor’s house is the same that he uses for cooking or drinking. When it is very cloudy, he strains it with a thick cloth and boils it, but only if he has gas, because most of the time he cooks with the firewood he cuts at the top of the hill.

Carrying cans of water became a routine for the inhabitants of Caracas, where the running water service hardly works. Photo: EFE

Washing and cooking with cloudy water

In another part of the hill that the La Vega neighborhood conquered, the worker Juan Millán bathes with his two sons in a ravine known as La Poza.

With a service so irregular that it only delivers water a few times a year, anyone might think that La Poza will become a mandatory stop for everyone in La Vega, but it is not.

In the neighborhood they know that some houses dump their sewage in this stream that often carries garbage or dead animals.

“Normally we use it (the water from La Poza) when there is a shortage, to bathe and for the bathroom, to wash. We boil it and use it for the kitchen,” Millán tells EFE.

“Right now it is like this (cloudy), but it always comes out white, white,” he adds before admitting that “he never” has bothered to know where the stream originates or if the water is suitable for consumption.

Many Venezuelans have no other option than to bathe and wash their clothes in a stream or waterfall. Photo: EFE

“Sometimes we are in need because there is no water, here we have already about three months without water and we have to look for it, grab it (in La Poza),” he says.

Jean Carlos Farías is in the same situation, a young man who says he is proud to have been born and raised in La Vega 26 years ago.

For as long as he can remember, his family has consumed the water from La Poza. With it they wash, cook, clean and even quench their thirst.

“My grandfather was a founder here and people have been drinking water from this place for years. Supposedly they did a study on it and they said that it had (the water) some mineral things from the earth, that it couldn’t be consumed like that, but everyone already drinks it. Nobody has ever happened to him, “he says.

Of course, Farías and his family take some precautions. They always boil the water before drinking it and only consume that which is on the side of the stream, where his grandfather installed a pipe that delivers constant liquid to his house some 20 years ago.

“If they drink from the other one that is running (further down) there, I do say that something could happen to people. That one is very bad,” he says, convinced by the fact that the sewage from his house -including from the bath- flow into the lower part of the creek.

A problem for almost 90% of the population

The public policy expert and director of the local NGO Ojo Avizor, Norberto Baussón, warns EFE that the failure in the supply of running water affects, in the best of cases, to almost 9 out of every 10 households in the country.

“The percentage per region varies between 87% and 99% of affectation due to lack of water. What that means is that it is a national problem, not a problem associated with a region or some circumstance,” he says.

According to the expert, mismanagement of the country’s aqueducts and the loss of qualified personnel due to the massive emigration of Venezuelans due to the economic crisis are the causes of supply failures.

He also points out that the high areas, such as the La Vega neighborhood of Caracas and hundreds of poor areas of the country, are the most affected.

“The higher you are on the net, the more affected you are. The poorest do not have the resources to build alternative systems as many of the middle class have done. through other sources, such as deep wells or cisterns, which can be appealed to, say with their resources. “

With this scenario, millions of Venezuelans from the poorest neighborhoods can only wait for water to fall from the sky to fill their tanks, as it happens in La Vega.

And, as the neighbors there say, for them it is normal and even common to use rainwater, because the pipes where the water that the State manages should come out has been dry for months.