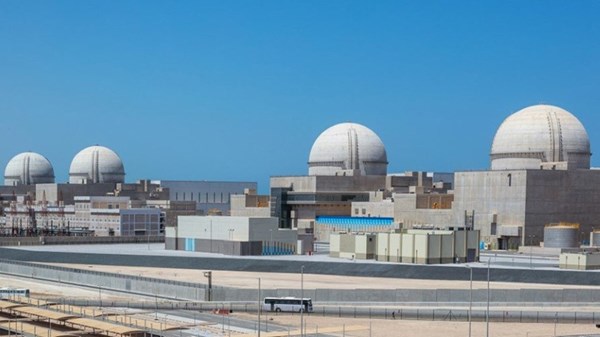 Most of the country’s landmarks were lit up in green in celebration of the country’s historic achievement, which is the commencement of commercial operation of the first peaceful nuclear energy plants being developed in the Al Dhafra region in the Emirate of Abu Dhabi. The first station in Barakah, along with the country’s most prominent landmarks, was decorated with various slogans and lit up in green, in reference to the environmentally friendly and carbon-free energy that the station began producing 1,400 megawatts of it around the clock for all homes and business sectors across the country. Once fully operational, the four Barakah plants cover up to 25 percent of the state’s electricity needs, which is enough to light more than half a million homes, while reducing 21 million tons of carbon emissions every year, which is equivalent to removing 3.2 million cars from the state’s roads annually. The UAE became the first in the Arab world to produce environmentally friendly electricity using nuclear energy. Barakah stations contribute to enhancing the social and economic growth in the country and supporting its efforts to achieve the goals related to confronting the phenomenon of climate change, thus consolidating its global leadership position in this sector.

Lukashenko announced the most important decision as president