Starting scene: Russia lost to Belgium in the first match of Euro 2020 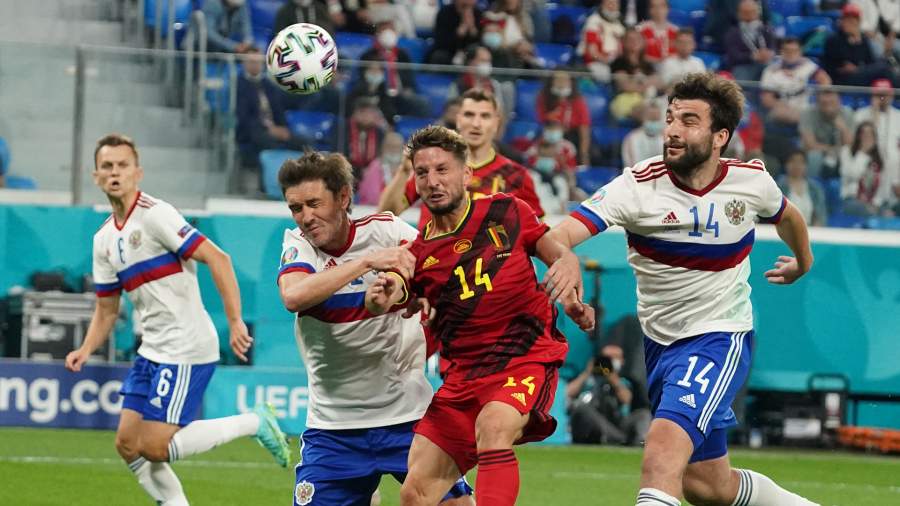 The Russian national football team had a bad start at the European Championship, having suffered a crushing defeat from Belgium (0: 3)… Our team was not helped even by the native walls of the Gazprom Arena, which is as full as possible, taking into account the coronavirus restrictions, in St. Petersburg (26,264 spectators). The match of the other two teams from our group almost ended in tragedy, but still it was played out and presented the first surprise – Finland beat Denmark (1: 0)…

No time for football

The first Group B match between the teams of Denmark and Finland, held in Copenhagen, was interrupted for almost two hours after the incident with the Danish midfielder Christian Eriksen. The 29-year-old football player lost consciousness right during the game, collapsed on the field and could not get up…

The match was immediately stopped, doctors rushed out and began performing resuscitation procedures, including the use of a defibrillator. Eriksen was reanimated on the field, as a result of which he left the stadium on a stretcher, but conscious…

Later, information came from the hospital that the condition of the Danish national team player has stabilized… They wanted to postpone the match to the next day, however the Danes themselves asked to finish the meeting, which resumed at 21:30. As a result, the Finns won 1-0, bringing the first sensation to the championship…

It was decided to hold the last match of the game day according to the previously approved schedule – the game between Russia and Belgium took place at the appointed time.

In recent history, the Russian national team has never beaten the Belgians: out of seven matches, five are lost and only twice our team managed to catch a draw… Moreover, both of these times happened in the framework of friendly games. Objectively, today Cherchesov’s squad is individually weaker than Belgium, where there are superstars in each line. And even the injury of one of the leaders of the “Red Devils” – the midfielder of “Manchester City” Kevin De Bruyne – slightly weakened the team of Roberto Martinez.

A few days before the start of the Euro, personnel losses also affected the Russian national team. First, defender Fyodor Kudryashov was injured, who could not take part in the control game with Bulgaria (1: 0). But if his damage at the headquarters of the national team is still expected to heal by the second or third match of the group stage, and he remained in the position of the team, then midfielder Andrey Mostovoy left her and will definitely not play at Euro. Zenith passed two positive tests for coronavirus – Neither antibodies (Mostovoy had previously been ill with covid), nor precautions saved. Instead, Dinamo defender Roman Evgeniev was summoned to the tournament.

“It is always problematic when, unfortunately, the players are injured,” the former coach of the Russian national team Valery Gazzaev told Izvestia. – However, other footballers have the opportunity to help the national team and play in the European Championship. It’s a matter of competition… There are not 11 players, but 23, where each position on the field is duplicated. Our national team players must show their best individual qualities and the validity of their challenge.

For Mostovoy, who was included in the final application of the team, who went through all the training camps with it and played in the final test match, this is undoubtedly a serious disappointment. For the Russian national team, the loss is not so catastrophic. However, the very fact of what happened is alarming, because it is not known whether the player managed to infect his teammates before he received the test results and was isolated.

– The loss of Mostovoy is not a catastrophe, – said another ex-coach of the Russian national team Sergei Kiryakov in an interview with Izvestia before the match.… – Still, Andrei was not a base player. Although he is good in terms of catching on the ball in midfield, sharpening the game on counterattacks when you need to keep the existing score. He knows how to qualitatively come out as a substitute. But he is not yet a backbone player in the national team., so you can safely survive his loss. As for Evgeniev, it was obvious that he would be the first candidate for replacement if someone were eliminated at the last moment. Here it was clearly necessary to strengthen the defense, especially taking into account the injury of Kudryashov.

One way or another, the Russian national team had to start their performance at Euro 2020 without Kudryashov and Mostov. The rest were in the ranks before the game with Belgium. AND when, if not on the Day of Russia, and even at almost home for yourself Euro (two matches in the group stage of the tournament – with Belgium and Finland – we will play in St. Petersburg), the main team of the country will try to correct the statistics of personal meetings in their favor for joy fans… In addition, at matches at the Gazprom Arena, it is allowed to fill the stands at 50% of the stadium capacity, and tickets for the game were sold out as soon as possible after they went on sale.

“The factor of home walls plays a significant role in the case of Peter,” Kiryakov continued. – Since there will be a lot of spectators, especially compared to most other stadiums of this Euro, we can hope that such support will inspire Russia and allow it to catch at least a draw. Moreover, the Belgians may not yet play out for the first match of the tournament, they can only roll in. And the absence of De Bruyne, even though there is someone to replace him, is a serious loss. If all these factors are in our favor, and the players of the Russian national team themselves play with maximum dedication and discipline, they will be able to surprise and achieve a positive result.

The atmosphere before the game was impressive. A huge number of people filled the main streets of St. Petersburg in the afternoon, a few hours before the match – the people were vigorously celebrating two holidays at once: the Day of Russia and the return of a major international tournament to the country… So, for example, in the very heart of St. Petersburg – on Palace Square – a huge Russian flag was stretched out. And closer to the start of the game, thousands of fans with Russian paraphernalia were already pulling up to the stadium, waving tricolors and shouting words of support to the national team.

Everything was decided by the class

In the stands, our people immediately showed who is the boss here.… Fans loudly booed every action on the part of the Belgian national team players and exploded with glee when the Russian footballers were in possession of the ball. That’s just the percentage of this possession was very low – 32% after the first half and 34% in the match… The Belgians, on the other hand, completely controlled the course of the meeting and, it seemed, did not even include maximum speeds, coming out as winners from almost all episodes in the class.

The first ball hit our goal in the 10th minute. Defender Andrei Semenov made a gross mistake in his own penalty area, as a result of which the main striker of the Belgians Romelu Lukaku found himself in a shock position and outplayed Anton Shunin without any problems… The Russians immediately snapped back, carrying out a good attack on the left flank and earning a corner. Mario Fernandez had a chance to excel from the standard, but the naturalized Brazilian shot right into the goalkeeper.

At the 34th minute, ours again conceded due to sluggishness in their own penalty area, when Tom Meunier, being all alone, finished off the ball into the goal after saving Shunin literally from a few meters…

In addition, in the first half, due to injuries, our team first lost Daler Kuzyaev, and then the most experienced football player in the national team, 37-year-old Yuri Zhirkov.

In the second half of the meeting, Cherchesov’s wards began to play more actively and in the first 15 minutes they were able to organize several good approaches to the opponent’s goal. However, it rarely came to blows. The Belgians, on the other hand, were in no hurry, playing by the score, saving strength and confidently defending themselves. But even in this mode, Martinez’s wards brought the score to a devastating one – Lukaku scored a double…

According to the results of the first round in Group B, the Russian national team takes the last place, behind the Danes in terms of the difference between goals scored and conceded. The first place belongs to Belgium, the Finns are the second. In the next round, Stanislav Cherchesov’s charges will meet in St. Petersburg with Finland (June 16)and Denmark will play Belgium in Copenhagen (17 June).