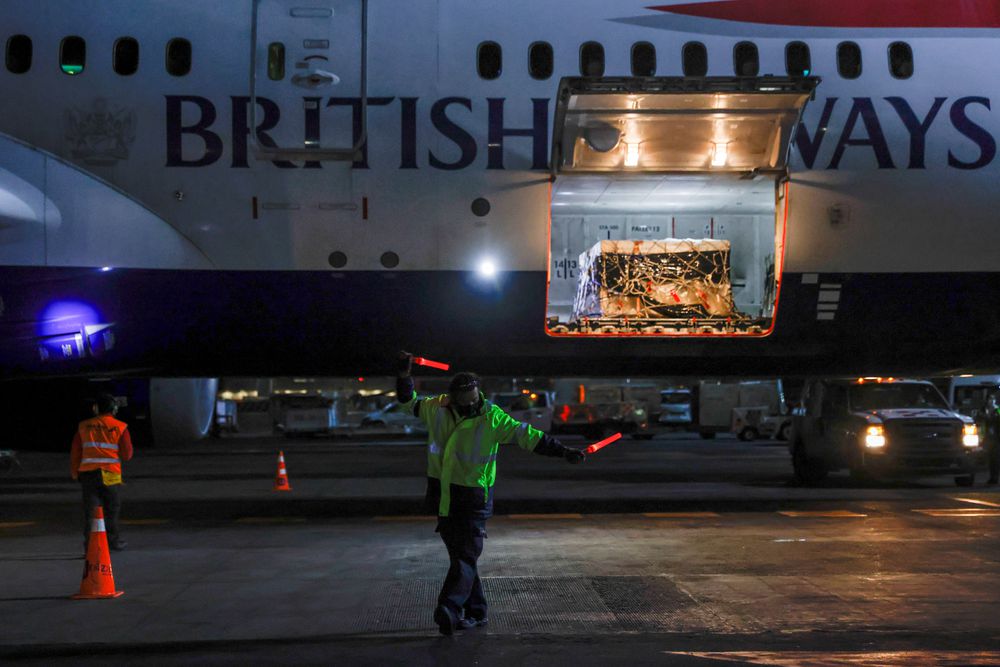 Sputnik V has finally landed in Mexico. After weeks of waiting, negotiations and political disputes, the country has received the first 200,000 doses of the Russian vaccine against covid-19. The Government’s priority is to advance with the vaccination of older adults in Mexico City, the most vulnerable population in the area most affected by the pandemic, which has already left more than two million confirmed cases and more than 180,000 deaths in the country. “We have already started the vaccination and it will not stop,” said the president, Andrés Manuel López Obrador this Monday.

Minutes before eleven o’clock on Monday night, the Mexican Foreign Minister, Marcelo Ebrard, has reported the arrival of the first doses from Moscow to the Mexico City Airport. The chancellor shared on Twitter a video which shows the interior of the British Airways aircraft with the cargo: “They occupy all the cargo space of the plane.” The vaccines will be applied from Wednesday, February 24 to March 5, in three municipalities of the capital: Xochimilco, Tláhuac and Iztacalco. The plan is to apply 20,000 doses per day to cover the entire population over 60 years of age in those districts.

It is the fourth vaccine to be applied in Mexico and the third to arrive in the last two weeks, after shipments from AstraZeneca (870,000 doses, February 14) and Sinovac (200,000 vials, February 20). The Pfizer and BioNTech vaccine arrived since December 23 with a symbolic delivery of 3,000 doses, but the US laboratory suspended the supply for almost a month, between mid-January and February.

It was around this time that Argentina received 300,000 doses from Russia and when Sputnik V, after months of courtship from the Kremlin, began to become a real option, with a trip to Argentina in early January from Hugo López-Gatell, the spokesman. for the pandemic. The Mexican delegation contacted the Russian developers, brought the technical file from the Argentine regulators and began to negotiate the purchase of 24 million doses. The figure was made official after a call between López Obrador and Vladimir Putin in late January.

“The president of Argentina, Alberto Fernández, helped us get these vaccines,” recalled the president, regarding Fernández’s three-day tour in Mexico. “We help each other,” he added. Both governments have established a diplomatic alliance that led to the arrival of Sputnik V and that resulted in an agreement since last August to produce and distribute between 150 and 250 million doses of AstraZeneca for Latin America.

After the latest shipments, Mexico has exceeded one million doses of Pfizer, but the pothole that stopped vaccination in the country in its tracks forced the López Obrador government to present other options to face the health crisis and release political pressure. On January 19, two days after it was announced that Pfizer could not meet shipments, Sputnik V emerged as a lifeline: the forecast was to receive 900,000 vaccines from Russia to fill the gap for Pfizer. But they did not arrive. The emergency use of the vaccine was authorized since February 2, but the authorities justified the delays due to disagreements with the contracts signed by both countries.

Another high-level call between the two governments last week unblocked the flow of vaccines from Russia. “I spoke with Sergei Lavrov, Minister of Foreign Affairs of the Russian Federation, who confirmed the shipment of the first shipment of the Sputnik vaccine this weekend,” Foreign Minister Marcelo Ebrard wrote. Over the weekend, on a tour of the north of the country, López Obrador made a “special recognition” of the support of Russia, China and India, the governments behind three of the last four shipments of vaccines.

Sputnik V requires two applications and it has become an attractive option for the country’s authorities because its reported efficacy is close to 92%, it does not need a deep-freezing network for its distribution and because it is being studied that it can be combined with the vaccine AstraZeneca, the largest bet in Mexico, with an acquisition of close to 80 million doses. “What happens if we put combinations of vaccines? First dose with that of Pfizer and second dose with the Sputnik vaccine “, said López-Gatell a few days ago,” there is no restriction in terms of patents that prevents this from being done, biologically we know that there is no danger “. The Gamaleya Institute of Russia and AstraZeneca have been collaborating for months to see the feasibility of this or even develop a combined prototype.

By far the vaccine with the most debated geopolitical and political component, Sputnik V has not been exempt from the production problems that Western laboratories have faced and has struggled in recent weeks with complying with shipments to Argentina, the first country outside Russia to approve its use. The hope is the same as with the rest of vaccines: that production stabilizes in the coming months and that injections begin to flow to protect more and more population.

While that happens, the priority is to diversify the vaccines available to have fewer risks. This diversification is a mirror of how vaccination is shaping up in the coming months: with 234 million doses of CanSino, Pfizer, AstraZeneca, Sinovac, Sputnik V and those that can be added to continue with the promise of overcoming the health emergency and the crisis economical. Authorities expect a new shipment from Pfizer on Tuesday. Hazza bin Zayed: By working together in a spirit of brotherhood and solidarity, we face challenges and achieve prosperity