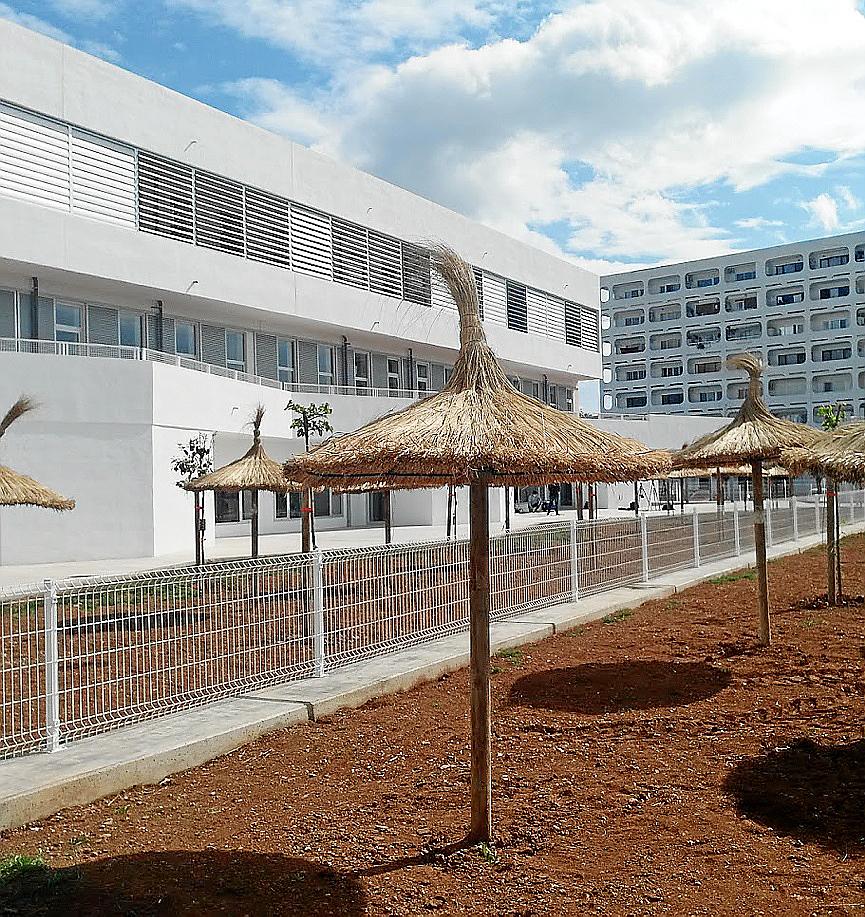 Members of the Balearic government have been beating a path to Alcudia in order to celebrate the building of the new primary school. Not so long ago, the education minister, Martí March (brother of former Pollensa mayor and leader of Junts Avançam, Miquel Àngel March) went to the site and joked that it should be known as the Nordic school. This is because it lies between the avenues Norway and Sweden.

This week it has been the turn of the president herself. Francina Armengol marked the occasion by observing that “education is the most powerful tool with which to grow and to change the world”. “With schools like this, we improve the future of what we love the most: our children.” An “historical claim” by families in Alcudia was being met. Next month, the first of 450 pupils will arrive at the school, which has been built “according to sustainable criteria and with a budget of 4.3 million euros”.

The president went on: “Today we show that, with political will and commitment, words translate into facts. I want to thank Alcudia town hall for its generosity; the families for their patience; and the educational community for its effort. Our commitment to education is firm. Between 2015 and 2021 we will have invested 88 million euros to increase, improve and expand 85% of the schools on the islands. “

So there we were. A spot of still-distant election campaigning perhaps, with the president in good company alongside fellow PSOE member, the mayor of Alcudia, Barbara Rebassa, as well as minister March. The school will actually open on May 4. Ninety-five of the eventual 450 pupils are transferring from three other schools – Hort des Fassers, Norai and Albufera. The sustainable criteria, which the president was keen to highlight, include solar panels for electricity generation and natural gas for the heating.

The play areas have parasols of the reed variety to be found on the beach. Are these new and dedicated ones or has Domingo Bonnin, the councilor for beaches, lent them for now? They aren’t all needed, as sunlounger capacity is down by around two-thirds. And talking of lending, the town hall generosity that the president mentioned equates to the budget of 4.3 million euros. The town hall has paid for the school, when payment for such things is the government’s responsibility.

The loan of 4.3 million will be repaid over time. Alcudia can at least afford to make such a sizable loan, given all the cash the town hall has sloshing around in the bank. One does wonder, though, why it was necessary for the town hall to have to lent the government the money. Was it solely to guarantee that the school did get built, as had been promised for so long, and that the president could announce the government’s commitment? It does seem a little odd, given that the government’s education budget is so vast – around 1,000 million euros a year.

Might the town hall be asked to dig into its pockets for another school? This could depend on whether the school finally gets built or not. In February 2019, the government declared that the site for the long-anticipated School of Hospitality and Tourism was in the regional community’s interest. A technical move, this meant that permissions and processing would not be held up by the usual laborious bureaucratic procedures. Two years on, and there is still no movement.

The site is what is being used as a parking area and where the Feria de Abril has been held. It is off the Calle Pollentia, more or less opposite the Hort des Fassers primary school; near to the post office and Mercadona therefore. While the declaration of community interest does allow things to proceed rapidly, there are two issues. These are caused by where the site is – next to a green zone and an archaeological zone that is part of the Pollentia Roman town excavations.

Major Rebassa says that alteration to urban planning regulations is “complicated”. As a result, the area to be used for the school has to be diligently plotted and marked out to ensure there is no interference with the two zones. Where this particular school is concerned, it is the ministry for the economic model, tourism and employment which has the responsibility. It has admitted that there is a “problem” with the planning, despite the declaration of community interest, and that there is no schedule for when the school might be built.

At present, the secondary school in Puerto Alcudia provides courses related to hospitality and tourism, but it doesn’t have anything like the necessary facilities. There is also the agreement with Iberostar to use the Ciudad Blanca hotel. This agreement, which has existed for years, comes to an end in 2021. The ministry says that it is “finalizing” agreement with another hotel. How long will this need to last? The School of Hospitality and Tourism has been demanded for years and years.

Putin and Pashinyan discussed the situation in Karabakh

The lonely vote for Pablo Iglesias in the millionaire La Moraleja