SPD boss Walter-Borjans on the Union chancellor candidate: “sure that it would be Armin Laschet” 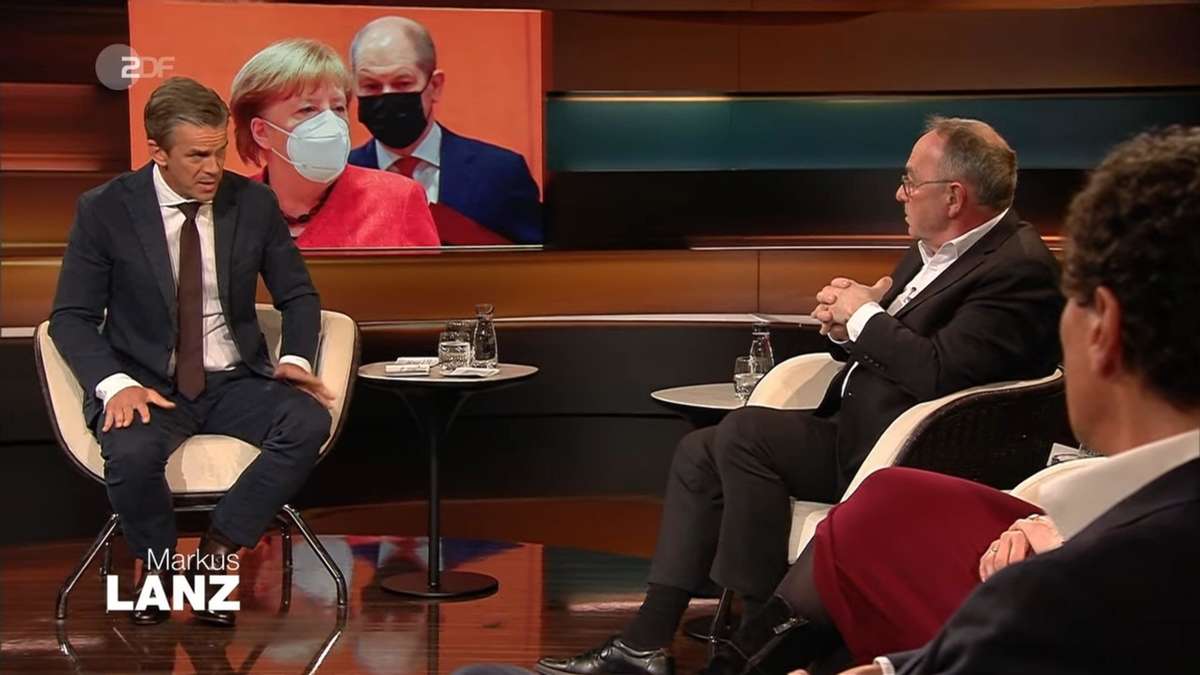 Söder or Laschet? “Markus Lanz” discusses the question of the Union’s candidate for chancellor with the chairman of the SPD, Norbert Walter-Borjans.

Hamburg – The “Markus Lanz” panel will first work on the CDU struggle for the candidacy for chancellor on Wednesday evening. The chairman of the SPD, Norbert Walter-Borjans, is, how could it be otherwise less than six months before the federal election, completely in campaign mode and finds that neither Armin Laschet (CDU) nor Markus Söder (CSU) are the suitable candidates. Walter-Borjans could not assess which of the two would end up as an opponent of Olaf Scholz (SPD) in the election campaign, but he too felt that the mood was changing and said: “I was sure that it would be Armin Laschet would. I don’t see it that way anymore, so it’s spinning right now. But I still do not believe that it is now clear that Markus Söder will do it. “

Melanie Amann at “Markus Lanz”: “I find that too understanding for the current crisis management”

When asked about his assessment of the bridge lockdown, Walter-Borjans is less harsh with Laschet than might be assumed. The capital correspondent for “Spiegel”, Melanie Amann, also feels that this is “too understanding” for the current work of the government. In the end, she believes that Laschet is following with his proposal “a call that has been held up to him all the time from science, from the medical profession, from his colleagues in the Prime Minister’s Conference and which he could have made a long time ago.” She thinks it is “Depressing that this should now be the new insight.”

Julian Nida-Rümelin at “Markus Lanz”: “We have closed areas that contribute little to the infection process”

The philosopher and mathematician Prof. Julian Nida-Rümelin, on the other hand, does not want to see the alleged contradiction between Armin Laschet and Markus Söder and, when looking at the pandemic indicators, points out: “Both are bad, Bavaria is a bit worse than North Rhine-Westphalia.” In his opinion, the two countries are easy to compare, they are populous and have long external borders. Nida-Rümelin questions numerous of the measures as a whole, some of which one does not even know whether and how much they contribute to the infection process. In his view, lockdown measures could only be the “extreme remedy”.

“Markus Lanz” – these were his guests on April 7th:

Intensive care physician Prof. Uwe Janssens agrees with this assessment and says: “We don’t know what the individual measures actually bring about.” However, he finds that it is currently time for the “extreme means”: “We have been Busy months saying: folks, it just can’t go on like this We need to reduce the number of infections significantly. ”His concern when the occupancy rates in intensive care units in Germany rise again to more than 5,000:“ Our employees are at their end. If we get over 6,000 again, we will lose them. They go into burnout. “

Uwe Janssens on “Markus Lanz”: “I regret the politicians”

Janssens recently published a position paper together with the German Interdisciplinary Association for Intensive Care and Emergency Medicine (DIVI) in which he and his colleagues criticized the “oversupply in intensive care units”. In other words, the fact that people can be kept alive longer “than they might have wanted themselves to”, as Janssens sums up the problem. It quickly turns out that although the topic is relevant, the composition of the “Markus Lanz” panel on Wednesday does not counteract the already ubiquitous Bundestag election campaign, which is why it is only a marginal note.

Although talk show host Lanz is currently accusing those guests who have a party book that they are only campaigning on his show, he is very interested in the upcoming federal election and therefore asks Norbert Walter-Borjans towards the end of the show with whom the SPD is after the Would like to form a coalition. The SPD chairman calculates that if the Union is to go into the opposition, mathematically only a three-party alliance would make sense: “We would talk to the democratic options, that’s the FDP and that’s the left.”

Norbert Walter-Borjans on “Markus Lanz”: “I would sleep restlessly with Armin Laschet as Chancellor.”

“You take everyone,” says the moderator Lanz and tries to point out the contradictions: on the one hand the business-oriented FDP and on the other hand a left that speaks of up to 30 percent property tax. “Are you going with that?” The moderator wants to know from the SPD chairman in relation to the demand of the left. Walter-Borjans says no: “That is not in our election program.” And: Before the state gets money from those who have already paid taxes, there are “a lot of companies that have so far avoided it, let’s take them first.”

On Wednesday evening, talk show host Lanz lacks the punch that made him stand out a week earlier in a conversation with Armin Laschet. The moderator works honestly on Norbert Walter-Borjans, and colleague Melanie Amann also tries to jump over to him. A real debate only develops selectively, for example the sometimes controversial statements by Julian Nida-Rümelin or Uwe Janssen’s plea for more self-determined death would have the potential for real disputes.

William and Henry from England have a date in London