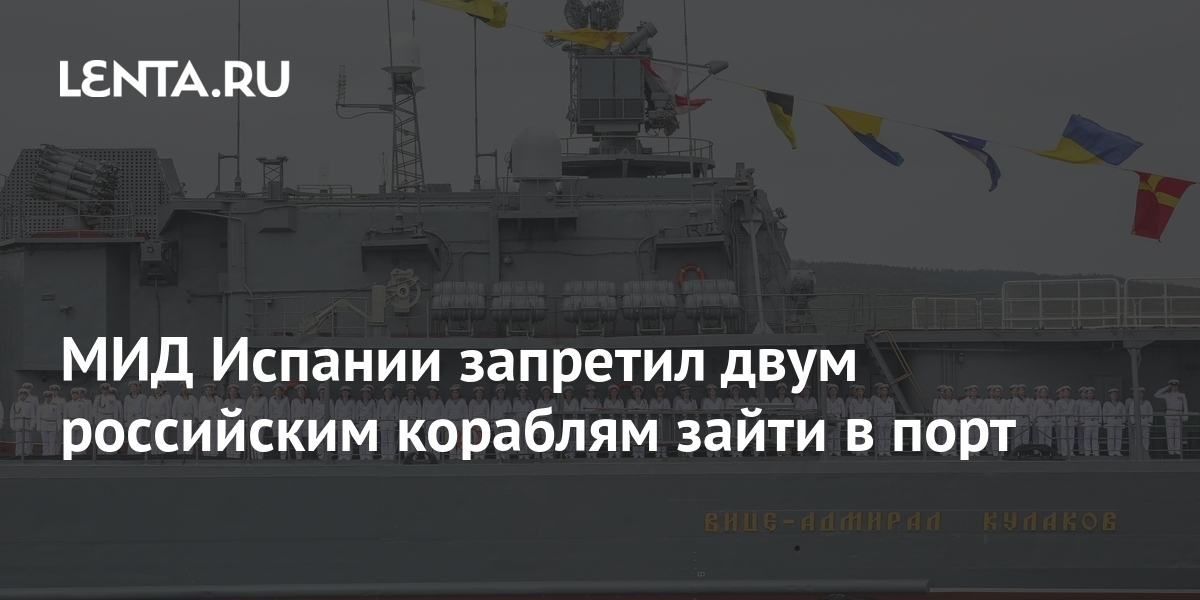 The Ministry of Foreign Affairs (MFA) of Spain has banned two ships of the Russian Navy – the large anti-submarine ship “Vice-Admiral Kulakov” and the rescue tugboat “Altai” – to enter the port in Ceuta. About it informs El Pais newspaper.

At the same time, the newspaper El Confidencial, citing sources notedthat Russian ships have stopped regularly at Ceuta in recent decades. The UK has expressed its displeasure as the port is located close to its naval base in Gibraltar.

According to El Pais, it was about a three-day parking, which was to begin on 18 August. At the port, the ships were supposed to refuel and replenish food supplies, and the crew members could visit the city. At the same time, the publication connects this “political decision” with the fact that in the spring of 2022 Spain will host the summit of the heads of state and government of NATO.

The request to enter Ceuta came through the channels of the Ministry of Defense, but then this department threw this “ball” to the Ministry of Foreign Affairs of Spain, pointing out the political nature of the decision. And the Foreign Ministry made a decision, realizing that Spain in the spring of 2022 will host a summit of NATO Heads of State and Government

on the refusal of the Spanish Foreign Ministry to Russian ships

In early June, a columnist for the American newspaper The National Interest, Peter Suciu, said that Russia was making significant efforts to build up its military power, in particular, through new ships. He recalled that, according to the head of the Russian United Shipbuilding Corporation Alexei Rakhmanov, five new and two repaired warships are planned to be delivered to the Russian fleet in 2021. The analyst referred to Rakhmanov’s words that last year USC delivered 11 ships and vessels, of which eight were completely new.

In his opinion, the Russian fleet is largely involved in the “recovery phase” and reorientation from the Soviet Navy, which by 1990 had more than 650 ships, including seven aircraft carrier cruisers, 73 missile cruisers and destroyers, and as many as 260 submarines. After the collapse of the USSR, the Russian military inherited a powerful fleet but could not afford to operate it or even maintain much of it, Suciu said, and that potential was largely lost. Russia is now focusing on building submarines and small surface ships, which are primarily intended to protect the country’s borders, although these ships can show their power outside of Russia, Suciu added.

In August, the author of the Chinese news agency Xinhua said that the Russian state was developing its fleet and thus was sending a “formidable signal” to Western countries. We are talking about the development and development in several directions: the author mentions the nuclear submarines “Belgorod” and “Prince Oleg”, a landing ship preparing for the appearance and a light stealth frigate. Among other things, Russia allegedly began to conduct exercises more often outside its territorial waters: to simulate hostilities in the Mediterranean Sea and the Pacific Ocean. According to the Deputy President of the Russian Academy of Missile and Artillery Sciences (RARAN) for Information Policy, Doctor of Military Sciences Konstantin Sivkov, a significant part of the ship composition of the Russian Navy (Navy), especially the oceanic zone, is still Soviet.

We can only be proud that Soviet shipbuilders and developers of anti-ship missiles managed to create ships, missile weapons, which, even after more than 40 years, remain of operational importance for the Navy and are capable of solving problems of ensuring the national security of the country.

Nevertheless, according to the doctor of military sciences, “our new ships really surpass all foreign counterparts in their tactical and technical data and combat capabilities,” but “they are indecently few.”