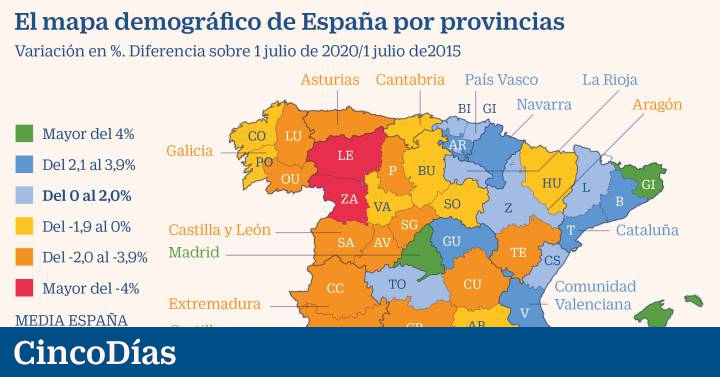 The problem is something that is not exclusive and the pattern is repeated throughout the world. Rural areas are losing population in favor of cities as their younger inhabitants seek new job or educational opportunities. According to the latest data available from the World Bank, 55.7% of humanity lives in an urban environment, compared with 46.6% in 2000. The most direct consequence is the abandonment of the rural environment.

Regarding the percentage of urban population, in the Spanish case it is higher than the world average and is in line with that of most European countries. According to the World Bank, in 2019 81% of Spaniards lived in cities, while in Germany and France the urban concentration of the total population was 77% and 81% respectively. Two years after the protests of emptied Spain that brought concern about the rural environment to the capital, the Government has promoted a plan of 136 measures that, taking advantage of 10,000 million euros from the European recovery fund, aims to reverse the effects of the depopulation.

The plan is structured in 10 large chapters that encompass the measures. According to the official document that delves into this roadmap, it seeks to favor the ecological transition, the connectivity of the rural environment, equal opportunities, the development of the territory, the promotion of sustainable tourism and the local productive fabric, as well as promoting the relocation of public services and promoting culture.

Among the specific measures, some examples are the installation of recharging points for electric vehicles, the training of young farmers and ranchers in model farms or universalizing the coverage of the broadband network for 100% of the territory and the population.

With a territory immersed in a kind of vicious circle in which the dwindling population results in less economic activity that, in turn, causes greater displacement in search of job opportunities, the Spanish Government seeks to promote those classified as tractor projects. On the one hand, it proposes creating a network of innovation centers located in rural areas; on the other, promoting local entrepreneurship and the digitization of strategic sectors through public aid and through collaboration with the private sector. The underlying idea is to promote projects that in turn end up generating more economic activity around them.

Tomás Guitarte, a deputy from Teruel Existe, a party that claims the oblivion to which, according to what they denounce, this region has been subjected, described the plan this week, during the government control session in the Congress of Deputies, as “the last opportunity for emptied Spain ”. The deputy of Teruel Existe approved in general lines the initiative of the Executive, but also requested several concrete measures. As, for example, implementing industrial activities in less populated areas, taking advantage of the competitive advantage of this territory to host electro-intensive industries where the massive installation of renewable energies takes place, “it could easily be done through a differentiated electricity tariff.”

Lidia Díaz, president of the Spanish association against depopulation (AECD), maintains a cautious tone. “It seems to us a varied and extensive proposal. It is true that depopulation is a complex problem and comes from distant times, therefore, it also makes sense that the solutions have to be varied, extensive but not complex in many cases ”.

Díaz highlights the absolute importance of infrastructures that, although they have sometimes been planned and contemplated, have not always come to fruition. Noting that there is no need for pharaonic projects that end the land, he believes that they are necessary because they are a basic right that, in turn, allows correct access to other rights such as health care or education. As key infrastructures, Díaz mentions trains and roads.

In reference to other types of barriers, beyond infrastructures, the president of the association focuses on the importance of removing from the collective imagination the idea that the countryside only has space for entrepreneurship in agriculture and livestock, as well as the The need to facilitate bureaucratic procedures by making them telematic, since any trip to the provincial capitals involves hours of travel.

“As we know, paper holds everything; As long as it is not seen how they are going to be translated and become a reality, there is little we can say ”, he concludes about the plan.

One question to ask is what to do about unsustainable economic opportunities. Lidia Díaz comments that if opportunities not included in sustainability appear in very depressed areas, it is usually because they are areas with low land prices and where there is no strong population that can oppose it. “In reality, any depressed area, referring to rural depopulation, can be reversed with sustainable companies and ventures.”

As an example of unsustainable development, Díaz cites the arrival of macro farms in the most unpopulated areas of Aragon, Castilla y León and Extremadura. The president of the AECD is concerned about the implications for the environment, for aquifers, biodiversity or the cleaning of soil and water, and criticizes the impact that the installation of clean energy macro-complexes leaves on the landscape or on birds.

“At the moment, it seems proven that none of these projects has pushed towards population fixation, since they hardly generate jobs in these facilities, not even for maintenance. And what’s more, it may even be that agricultural or livestock farms are closed due to the large areas of land that are used ”. Despite the criticism that renewable energy facilities receive, Díaz points out that they are not against clean energy, but rather that it be implemented without taking environmental impacts into account.

Two killed in a Tesla accident in Texas: I was 'with no one behind the wheel'

Fans got it right: Dragon Ball revealed who the masked saiyan is

Due to the new restrictions, the temples in the AMBA will continue to be closed and the controversy grows in the Church