Spain: thousands of people protested in Madrid against pardons for the independence leaders of Catalonia 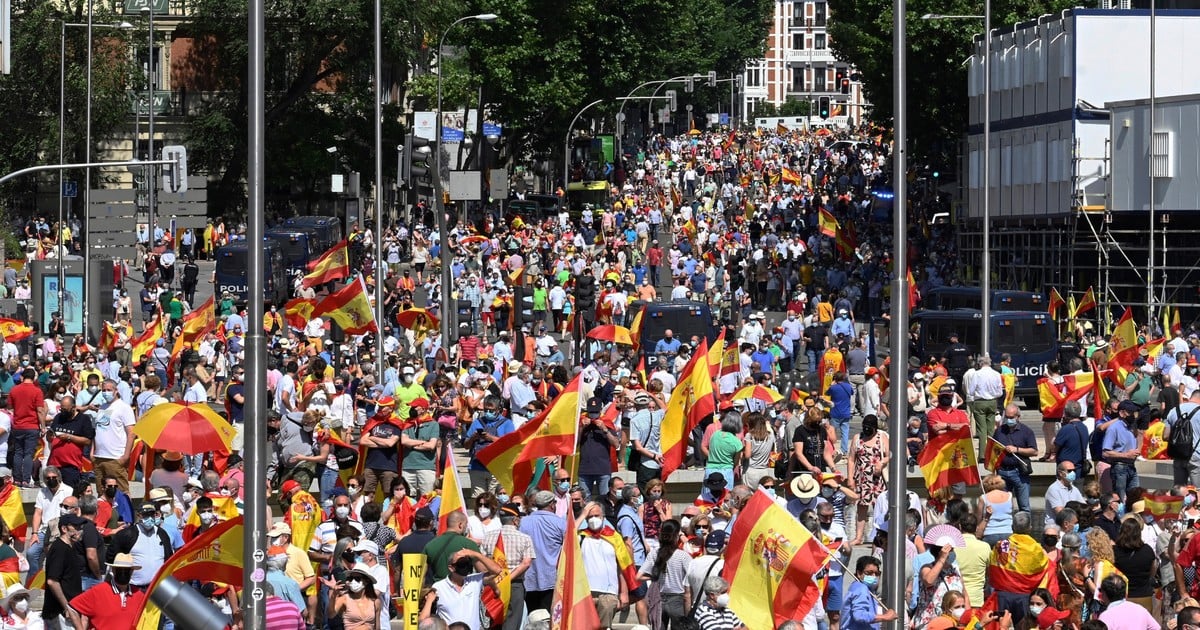 At the beginning of the summer and with almost 30 degrees, in the Plaza Colón in Madrid this Sunday there were scarves. Scarves with the national colors of Spain, chinstraps, umbrellas and flags in red and gold that were waved in the hands of thousands of Spaniards who demonstrated against a decision that the government of the president Pedro Sánchez is about to take: to pardon the Catalan independence politicians who were tried and convicted for having organized the referendum on illegal self-determination and for having tried in 2017 to separate Catalonia from the rest of Spain.

The “no to pardons” brought together thousands of people that, depending on who counted them, they were 25,000 -for the National Police- or 126,000 -for the Municipal Police of the City Council, governed by the opposition Popular Party (PP).

But this time, the demonstration against the coalition government it was not organized by any political party, although Vox, PP and Ciudadanos joined with delight to ask for Sánchez’s resignation.

They do not forgive him for wanting to pardon those who have been in prison since 2017 and were convicted, for sedition, to spend between 9 and 13 years in a dungeon.

General view of the concentration called by the Unión 78 platform, this Sunday, in the Plaza de Colón in Madrid, to show its opposition to the pardons of those convicted of the “procés”. Photo EFE

Convened by the Unión 78 platform in which it participates, among other figures, the philosopher Fernando Savater, the protest did not have as speakers any of the leaders of the opposition political parties who participated from the plain, mingling with the people.

Because the right wanted, this Sunday, to avoid reissuing “the photo of Colón”, as the last major demonstration against Pedro Sánchez was called, which in 2019 portrayed Santiago Abascal -leader of the extreme right Vox-, Pablo Casado -president of the PP- and Albert Rivera -by then at the head of Ciudadanos- twinned as in the final hug of the Rolling Stones on stage after a recital.

Vox, a force on the rise, was the only one who benefited from that photo that hit the three parties in a block labeled “looks.” The PP and Ciudadanos have tried to uncheck themselves since then.

From Buenos Aires, President Pedro Sánchez had said that he understood “that there may be compatriots who may have qualms regarding the possibility of giving pardons to Catalan prisoners, but I ask you to have confidence because we have to make a commitment to coexistence, ”said Sánchez on Wednesday during his official visit to Argentina of less than a day.

Sánchez needs to speed up gestures of approach to the sovereignists who from their seats in the Congress of Deputies allowed his investiture and they helped him to approve the General State Budgets in order to continue governing.

The president promised a dialogue table with the independentistas that could hardly be reunited due to the restrictions imposed by the pandemic. And he agreed to a meeting with Catalan President Pere Aragonès before the end of the month.

View of the concentration called by the Unión 78 platform, this Sunday, in the Plaza de Colón in Madrid, to show their opposition to the pardons to those convicted of the “procés”. Photo EFE

“We ask Pedro Sánchez to do not sell the national unit for continuing in La Moncloa ”, said this Sunday Pablo Casado, leader of the PP, before joining the protesters and from the door of the party’s headquarters, on Genova Street, a few blocks from Plaza Colón.

“We ask you respect the constitution that he has sworn and promised to defend ”, he added.

“Why do you negotiate in a jail with criminals what we all voted for 40 years ago in an exemplary transition,” Casado said. Spain, yes. Pardons, no”.

Behind Casado applauded the elected president of the Community of Madrid, Isabel Díaz Ayuso, who went even further with her statements: “What is the King of Spain going to do from now on? Are you going to sign those pardons? Are they going to make him an accessory to that? ”Diaz Ayuso wondered.

The first vice president, Carmen Calvo, was the voice that represented the government this Sunday: “I think it’s the photo of impotence, of not having been in politics for 10 years and that is why they are in the Plaza de Colón launching papier-mâché proclamations, “said Calvo.

In the last hours, the right-wing parties have been busy circulating stale statements of the current head of government in which he condemned pardoning.

“No more pardons for political or economic reasons, ”Pedro Sánchez once said.

“We must end political pardons. I feel shame and I apologize to the citizens for those of the PSOE ”, he said on another occasion.

On the Plaza Colón stage, the writer Andrés Trapiello opened the speeches. “No one is a façade for saying what the president said from the government a few months ago, ”he said.

“Enough of the lies. It is enough to say one day that the seditious Catalans will not be pardoned and the next the opposite, ‘added Trapiello. Enough of agreeing to concord with those who have finished with it and have promised to finish it off once and for all. Enough of promote tables behind the back of Parliament to deal with matters that concern the entire nation. ” “You liar. Liar. Elections now, now, now, ”read a poster with a portrait of Pedro Sánchez that was waving in the middle of the crowd.

This Sunday, no one respected the safety distance in the Plaza de Colón, that emblem of the city between the Salamanca district and the Chamberí district that boasts of flying the largest flag in Spain.