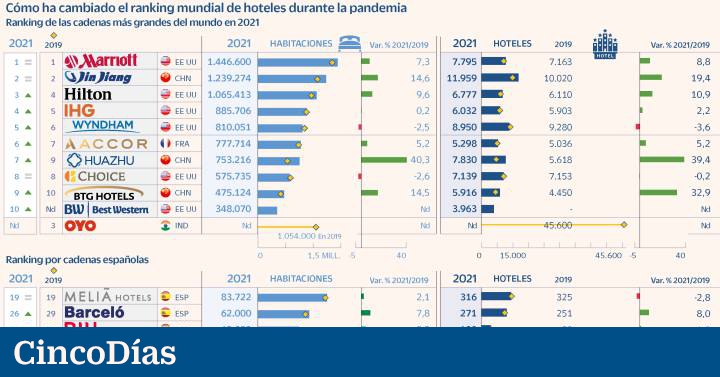 The five consecutive years of growth that tourism in Spain has chained since 2014 caused a historical record to be reached in the arrival of foreign travelers (83.7 million) and spending (92,278 million euros) in 2019. In that period, the Spanish hotel companies began an expansion that led them to conclude this year with six business groups (Meliá, Barceló, RIU, Iberostar, Eurostars and H10) among the world’s top 100according to the annual classification made by the American publication Hotels.

What has been the impact of two years of pandemic among the large Spanish hotel companies? Despite having accumulated millionaire losses, having suspended thousands of jobs and having deployed hundreds of contingency plans to cut costs and avoid the collapse of income, the update of that classification, with the data at the end of 2021, shows that Spanish companies have came out relatively unscathed from that catastrophe, as evidenced by the fact that all six companies remain among the 100 largest in the world.

Meliá continues to be the first Spanish chain and retains the nineteenth position, despite having reduced its size, going from 325 to 316. If the number of assets has decreased, the number of rooms, however, has grown from 82,011 in 2019 to 83,722 in 2021, which represents an increase of 2.1%. The hotel company directed by Gabriel Escarrer will reduce its size even more at the end of this year, since it plans to close a divestment in the last four months like the one made in 2021, in which it got rid of eight hotels.

Barceló ranks second among Spanish companies in 26th place in the world ranking, with 271 hotels (20 more than in 2019) and 62,000 rooms (7.8% more). In fact is one of the two companies that improves its positionsince it gains three places compared to the 2019 classification. In those two years of the pandemic, it has invested 150 million in reforms, which, in the opinion of Raúl González, CEO of the hotel division, “it will make us strong to get out of the pandemic and face future downward cycles”. RIU has lost one position (from 33 to 32) and although it has reduced its size (from 100 to 99 hotels), it has increased the number of rooms with almost 2,000 additional ones. After opening one of its last hotels in Senegal, it is now considering growing with a focus on Africa and Asia.

Fourth figure Iberostar, which climbs three positions (from 47 to 44)once again exceeds 100 hotels (104) and is preparing an offensive towards the Caribbean, where it plans to open five assets in the coming quarters (two in the Dominican Republic, two in Mexico and one in Aruba).

Eurostars lost three positions, despite having increased the number of hotels by 7.6% to 227 and the number of rooms by 3.1% to 2,526, which places it in 70th place. belongs, was rescued by SEPI with a help of 241 million euros. The Spanish presence is culminated by H10which loses seven positions (from 87 to 94), despite incorporating a hotel since 2019 (from 65 to 66), weighed down by the loss of almost 800 rooms.

The main change that the pandemic has produced has been the progressive loss of weight of the US and Europe, which traditionally controlled a substantial part of the hotel industry, in favor of China.

Of the ten largest groups in the world, six are American, three are Chinese and only one (Accor) is European. But if the analysis focuses on activity in the two years of the pandemic, China’s leading role is indisputable. Of the 609,000 rooms that have been added to the world hotel plant between 2019 and 2021, 434,556 (71.3%) correspond to Jin Jiang, Huazhu and BTG, the three Chinese giants. The percentage is even higher in the case of hotels, since of the 6,929 new openings, 5,617 (81%) corresponded to these three groups.

Another fact that reveals the greater relevance of China in the hotel industry is the strong growth of Jin Jiang, the second largest hotel chain in the world, which has increased the gap with respect to the third (the American Hilton) and has significantly reduced it compared to the largest hotel company in the world (the American Marriott). If the difference in size with Hilton was 109,450 rooms in favor of the Chinese, two years later it has increased to 173,861 rooms. The gap with Marriott has been reduced in rooms, since if this was 267,302 rooms in favor of the American, in 2021 it was 207,236. In hotels, the difference in favor of Jin Jiang in 2019 (2,857 more) grew in 2021 (4,164 more).

The only representative of the European industry in that top 10 is the French Accor, which registered a growth of over 5% in rooms and hotels, which helped it to climb one position to the sixth position in the world ranking. To find the next European operator you have to go down to Meliá (29). Criticism of episode 4 of 'The House of the Dragon': Daemon and Rhaenyra almost burned