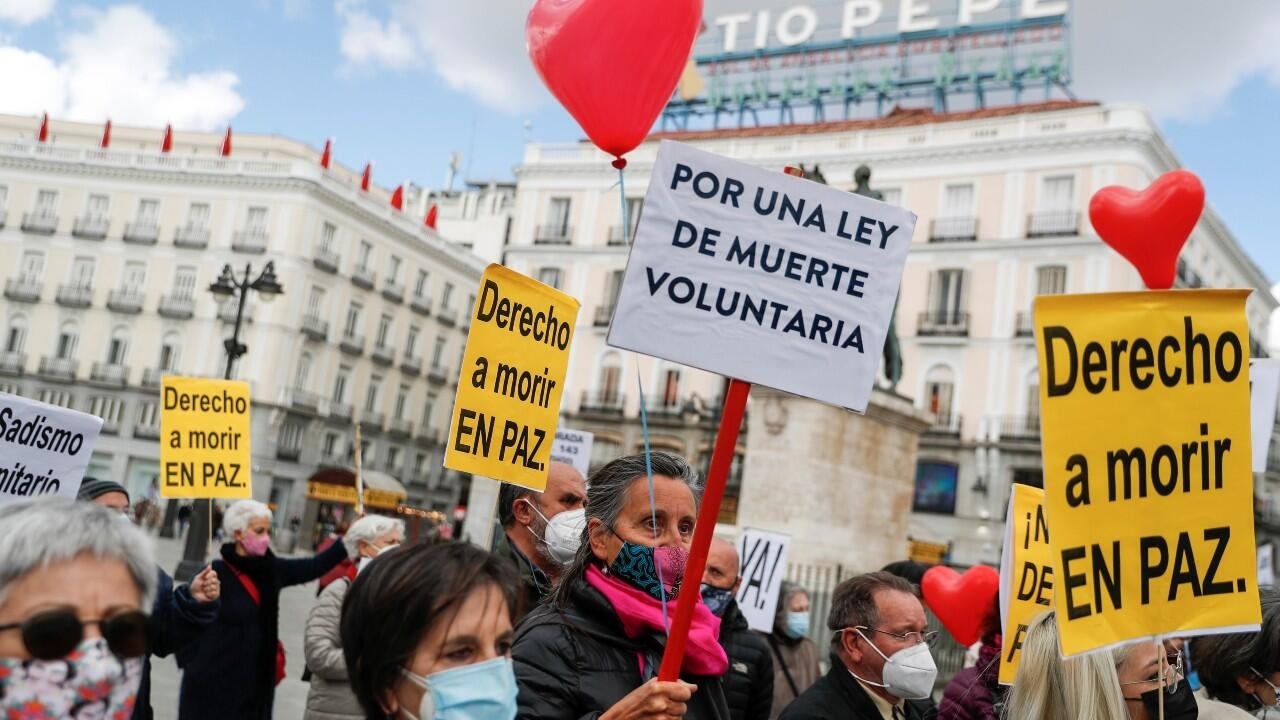 The Spanish Parliament approved a law that a large part of society has demanded for years, with the opposite vote of the conservative bench. In this way, the country becomes the fifth in the world to fully regulate the law and the seventh to have it legalized.

Green light for the legalization of euthanasia in Spain. A regulation of a right that different collectives and social groups had been demanding for several years. The euthanasia law, which will begin to be regulated within three months, will make it possible to satisfy the demands of “dignified death” and an end to suffering for people with chronic, incurable or serious diseases.

The text approved in the Spanish Parliament states that any person of legal age who suffers “a serious and incurable disease” or a “serious, chronic and incapacitating condition” that affects autonomy and that generates “physical or psychological suffering” constant and intolerable “.

The law has enjoyed wide support in the Congress of Deputies with 202 votes in favor, two abstentions and 141 votes against. This was promoted by the Spanish Socialist Workers Party, currently in the Government, and had the support of the vast majority of progressive, nationalist and centrist forces. However, the conservative Popular Party and the far-right Vox opposed the resolution.

Today we are a more humane, just and freer country. The euthanasia law, widely demanded by society, finally becomes a reality. Thanks to all the people who have fought tirelessly so that the right to die with dignity was recognized in Spain. pic.twitter.com/Ge4CZWuvIe

Vox affirmed that it would take the law before the Constitutional Court because “murder is being legalized” and the Popular Party defended a similar position. Both promulgated the creation of a Palliative Care Law. A proposal that, however, has not taken shape so far. In both political formations the line of the Catholic Church has a great weight in this type of decision. The far-right formation warned that if it ever comes to power, it will overturn the law.

With this approval, Spain becomes one of the countries in the world with the best guarantee in this regard. To date, only Luxembourg, the Netherlands, Canada and Belgium have generally regulated euthanasia. In addition, New Zealand is expected to start regulating it in November. In Colombia, the practice is legal according to a Constitutional Court ruling, however, it is not regulated.

Spanish law will be one of the most guaranteeing in the world by establishing a series of processes that can take time, from the moment the patient requests assisted suicide until it is applied, just over a month. The applicant will have to confirm twice in writing in less than 15 days that he wants to undergo the process and that he is not experiencing “external pressure”.

After this, a guarantee and evaluation commission will study your case, your diagnosis, how long you have been ill or whether or not you have resorted to palliative care. This court will be made up of doctors, nurses and lawyers. The patient can withdraw at any time in the process if he so wishes. This commission will respond to the patient in less than 19 days.

Despite the controversy that some conservative sectors of the country have wanted to generate, the Spanish Sociological Research Center assured that 87% of Spaniards are in favor of having the possibility of resorting to euthanasia if the patient wishes. A much higher approval rate than other laws, such as free abortion.

The news has generated great relief among the families of people with chronic diseases who, although they wanted to, could never resort to a euthanasia law. Many of these relatives were even forced to help their loved ones commit suicide and were charged for it.

Among those people was Ángel Hernández, a man from Madrid who in 2019 helped his wife to die by supplying her with a poison that ended her life. His wife, María José Carrasco, had been suffering from multiple sclerosis for 30 years, an incurable disease that progressively deteriorated until she stopped walking, eating or speaking on her own. Her dependence was total and she repeatedly expressed that she did not want to live and that she wanted to die “in a dignified way.”

After years of fighting for the regularization of euthanasia, she asked her husband to help him die due to his suffering and he did so by recording the moments before and after his death to present that it was at the will of his wife. The images traveled all over Spain and shocked the country, promoting this law. Despite this, Ángel Hernández faced charges of up to six months in prison.

Like this case there are dozens in Spain. People who do not want to live once all their memories disappear because of Alzheimer’s and that their disease becomes a constant suffering for their families. Or citizens like Ramón Sampedro, a Galician who suffered from quadriplegia for decades and who decided to commit suicide in 1998 by drinking a poison that a close person placed nearby.

Among the biggest defenders of this law who are still alive is Rafael Botella, a 35-year-old man who at 19 was left quadriplegic in a car accident in which his girlfriend died.

In countries where this procedure is legal, between 1% and 4% of annual deaths in the country are due to this cause. This means that, taking into account the average, between 4,000 and 17,000 Spaniards will choose this route per year once it is implemented.

The euthanasia law thus responds to a demand that thousands of Spaniards had been making for decades and offers guarantees to people suffering from incurable diseases. This law will not be mandatory, just a different option to palliative care for those who want to have a dignified death.

Variants of Covid: flight reductions will be from April and 20,000 more passengers could still arrive

iPhone with the rarest defect was sold for 208 thousand rubles