Spain: King Felipe VI led a tribute to those killed by coronavirus 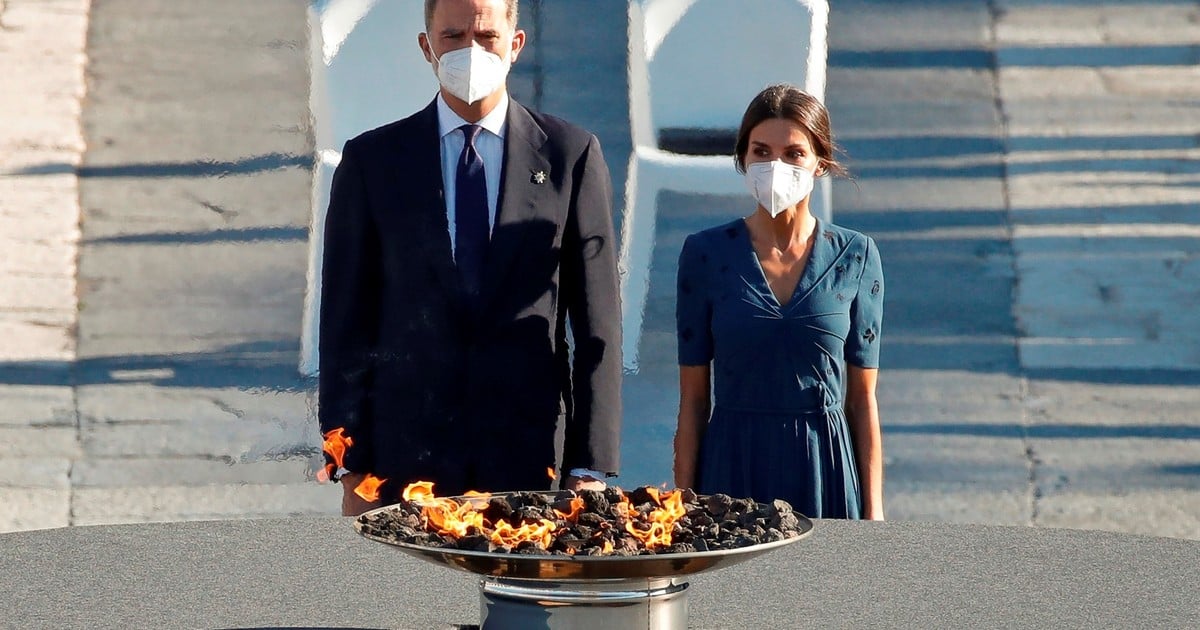 The King Felipe VI, accompanied by the Queen Letizia, led this Thursday in the Plaza de la Armería del Palacio Real an emotional tribute to those who died from the coronavirus pandemic, mainly to health personnel and the elderly, who were the ones who suffered the most from the virus attack.

More than a hundred health professionals lost their lives as a result of Covid and about 130,000 have been infected in the Iberian country. This tribute was intended to offer to those closest to him the consolation and gratitude nationwide.

For its part, the Council of Ministers granted this Tuesday the Grand Cross of Civil Merit 120 members of the health personnel who died from the virus.

Likewise, the King delivered 102 of these on Thursday award to the families of the victims, four publicly during the first part of the ceremony and the rest in a later private act inside the Palace.

King Felipe VI and Queen Letizia in tribute to those who died from the pandemic. Photo EFE.

The tribute, led by journalist Fernando Ónega, began at nine in the morning, with the entrance of the authorities to the Plaza de la Armería.

After the arrival of the Kings, the Spanish Radio and Television Orchestra interpreted the national anthem and that of the European Union and, later, the pediatric surgeon of the University Hospital of Malaga María Díaz Diñeiro took the floor, who was accompanied by her mother and sisters .

They are the relatives of Dr. Joaquín Díaz Domínguez, who was medical director and head of the Surgery and Digestive System Service of the Madrid hospital in La Paz, where died with 67 years in April of last year, shortly after retiring.

After his speech, the votive flame was lit and the King imposed the Grand Cross of Civil Merit on him, which was awarded to his father. He then did the same with the relatives of the other three deceased health workers, representing the entire collective.

At the suggestion of the Casa del Rey an age criterion was followed for the election of the four families of the deceased who received this award in public, among which is the oldest, the youngest and a doctor who was not born in Spain, but who did most of her career there.

King Felipe VI and Queen Letizia in tribute to those who died from the pandemic. AFP photo.

One of the most endearing moments occurred when Araceli Hidalgo, the lucky 97-year-old woman, intervened. the first dose was inoculated last December and that he achieved “fame” for that milestone when he explained to the media what he had felt when he received the vaccine.

Hidalgo continues to live in the Los Olmos Residence in Guadalajara and, although he has mobility difficulties, he did not want to miss the tribute and took the opportunity to send a message to the youngest to that “respect” the virus.

More elderly people who were among the first vaccinated in different autonomous communities and whose ages range between 78 and 96 years were also present in the Plaza de la Armería.

His presence sought to symbolize the force of vaccination, the hope for the exit from the pandemic and the value of the group most affected by mortality in this crisis.

During the event, a video with the title of Hope, in which the soccer player Andrés Iniesta participated, presenting real histories of overcoming the pandemic.

Then came the speech of King Felipe VI, who transferred the “infinite gratitude” that the whole country feels towards those who fought on the front line against the virus, “putting their duty before their safety”.

He also called for caution, since the virus is still present, and to face this situation from “unity”.

About 45 minutes later the act ended with the interpretation of the song That’s why we sing together, composed by Josu Elberdin, and performed by the Orfeón Pamplonés, under the direction of Igor Ijurra Fernández.