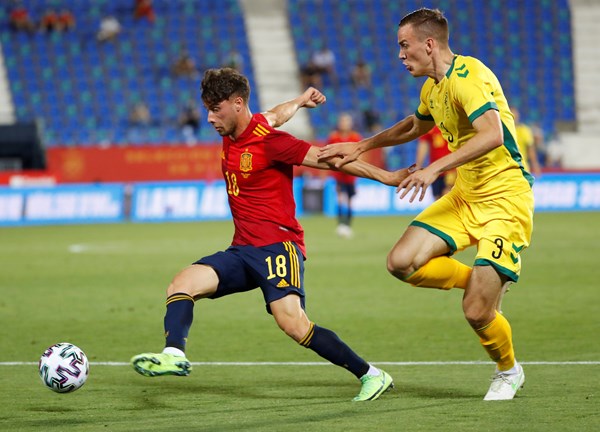 The Spanish national team created a health “bubble” for 11 additional reserve players, to be a “parallel” team capable of playing the European Cup finals, which begins on Friday, in the event that the number of Corona virus infections increased in the ranks of “La Roja”.

After captain Sergio Busquets was declared infected with the virus on Sunday evening, the Spanish Football Federation revealed late Tuesday that a second positive case belonged to defender Diego Llorente.

In light of this reality and the possibility of new infections emerging, the team decided to expand its reserve squad, which initially included 6 players, by adding 11 others in order to compensate for any possible absences from the continental finals.

This “parallel bubble” was created as a precautionary measure in the event that other positive cases associated with Busquets and Llorente’s infection appeared, according to what “La Roja” reported.

The 11 substitute players included Alvaro Fernandes, Oscar Mingisa, Marc Cucurea, Brian Gil, Juan Miranda, Gonzalez Villar, Boso, Brahim Diaz, Subimende, Yeremi Pino and Javi Boadu. All of these players participated in the friendly match that was held on Tuesday in Leganes, which was won by “La Roja” 4-0 over Lithuania.

Later on Wednesday, the Spanish Ministry of Health confirmed that all players participating in the European Cup 2020 will receive the vaccine against Covid-19, days before the start of the competition.

After the announcement on Sunday of Busquets’ injury, the Spanish federation expressed late on Tuesday night that it “regretted to announce that the examination of defender Diego Llorente came back positive, following the recent tests carried out at the national team training headquarters in Las Rosas.”

Similar to what happened with midfielder and captain Busquets, the Spanish Federation confirmed that Llorente will leave the national team this evening in a medical car, in compliance with the health protocol. Enrique had initially called 6 reserve players, including Chelsea goalkeeper Kepa Arrisabalaga, 2010 world champion Raul Albiol (Villarreal) and Leeds striker Rodrigo Moreno… The 17 reserves will remain far from the “bubble” of the 26-man squad for the continental finals, according to a national team statement.

According to the regulations of the Continental Confederation, Enrique has until the first match of his team in order to make a change to the squad of 26 players, in the event that one of them is unable to play for medical reasons approved by UEFA.

Spain plays its Group E matches at home in Seville, where it begins its campaign on Monday against Sweden, which in turn announced positive cases of the Corona virus in its ranks, including the young talent of Juventus midfielder Dejan Koloshevsky (21 years). She later plays the European champion in 1964, 2008 and 2012 against Slovakia and Poland on the 19th and 23rd of this year.