Spain: 40 years after the ‘Tejerazo’, the memory of the author of the most iconic photo of the attempted coup 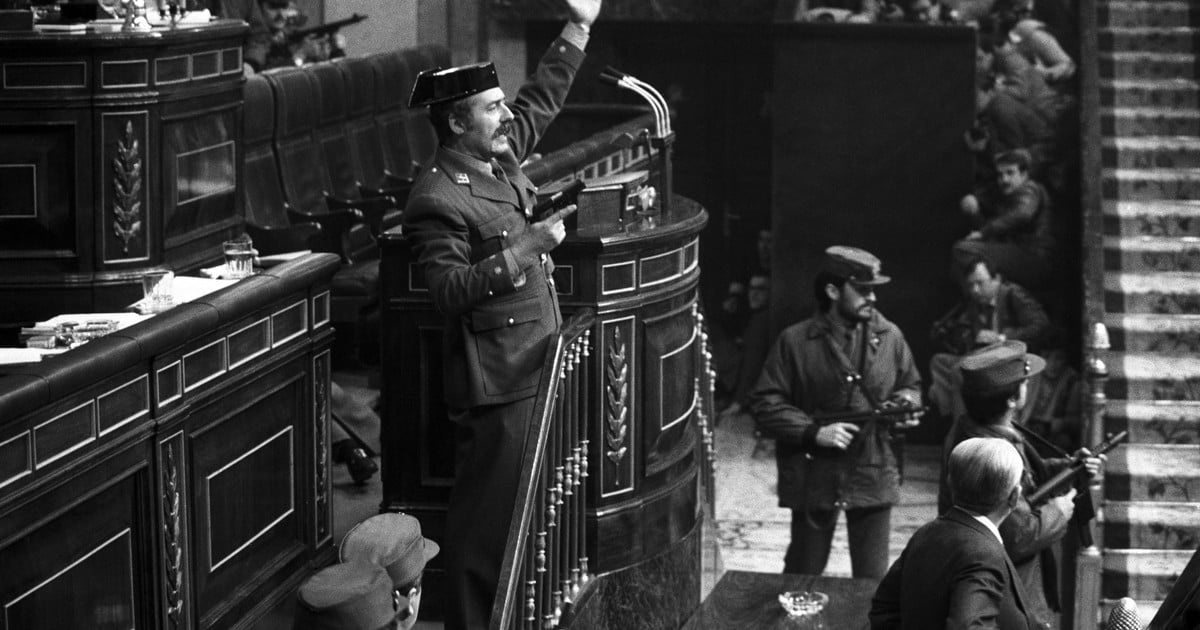 Shelling like never before since he assumed as the first coalition government of the Spanish democracy, in January of last year, the society between PSOE and United We Can was touched this Tuesday commemorate the 40th anniversary of the failed coup of February 23, 1981.

While the good or doubtful democratic quality of Spain is being held in the face, President Pedro Sánchez (PSOE) and Second Vice President Pablo Iglesias (United We Can) applauded in Congress the words of King Felipe VI, who claimed the role of his father, the emeritus king Juan Carlos, during that day of ’81 in which the military put the young Spanish democracy in check.

“His firmness and authority were decisive for the defense and triumph of democracy,” said Felipe VI about his father.

Juan Carlos I de Borbón was crucial that morning when he confronted the coup plotters and, after one in the morning, sent a message to the Spaniards: “I have ordered the civil authorities and the Joint Chiefs of Staff to take all necessary steps to maintain constitutional order within the current legislation, ”Juan Carlos said then.

The attempted coup of 23-F in Spain, and the assault by Lieutenant Colonel Antonio Tejero on Congress. Photo Manuel Perez Barriopedro / EFE

He had been on the throne for five years to which the dictator Francisco Franco had predestined him before his death in 1975.

He abdicated in 2014 and moved to the United Arab Emirates in August 2020 due to suspicions of shady economic dealings that the Justice is investigating.

The anniversary for the 40 years of the coup of ’81 forced a postcard of Sánchez and Iglesias to commemorate that, far from weakening it, ended up strengthening Spanish democracy: the partners of the coalition government have weeks showing the lint how little they agree on issues such as the Catalan conflict, equal treatment, policies for LGTBI people and the regulation of rents.

In addition, seven parliamentary groups – the Basque and Galician nationalists and the Catalan independentists – turned their backs on King Felipe and did not participate in the act in Congress. “Those who were missing are precisely the government’s partners,” the opposition blamed.

“Everybody quiet!”shouted Lieutenant Colonel Antonio Tejero at 18:23 on February 23, ’81 when he broke into the Congress of Deputies.

At about the same time, in Valencia, Lieutenant General Jaime Milans del Bosch, the only military command that Tejero recognized as authority, deployed 2,000 soldiers and 50 tanks through the Valencian streets.

In the Parliament of Madrid, the investiture was voted of the candidate for president of the government, Leopoldo Calvo-Sotelo, of the Unión de Centro Democrático, who was going to take the post left by Adolfo Suárez, who had submitted his resignation as president on January 29.

Manuel Pérez Barriopedro, a photojournalist for the state agency EFE, was there to tell it with his photos.

When Tejero burst out screaming and raised the gun, Barriopedro began firing his Nikon F2.

Of that Kodak TriX Pan roll the image-icon of that failed survey came out that Barriopedro rescued between his stocking and his moccasin and with which he obtained the World Press Photo and the National Journalism Award.

Tejero, 89, he was sentenced to 30 years in prison for consummated military rebellion, aggravated by recidivism. He served his sentence and today he lives between Madrid and Marbella. He was expelled from the Civil Guard, lost the title of lieutenant colonel and was busy painting.

Barriopedro, at 73, is retired from the profession. But not from memories.

“The satisfaction is that today that photo is in the textbooks of schools to study the history of Spain,” he confesses to Clarion Barriopedro.

– Do you think the figure of the emeritus king, venerated for his defense of democracy that 23F of ’81, is affected by the fact that he is being investigated today?

-I think King Juan Carlos has been wrong in the last years of his life. I am not going to take away his merits as a monarch and his performance on the night of February 23. He has done many things for the good of Spain but we have realized that he was not so handsome, so tall or so blond. In recent years he has not proven to be a good patriot for Spain. It is my personal opinion.

-Did any of the protagonists of your photo ever contact you?

-Do not. I tried. I tried to contact him when Lieutenant Colonel (Tejero) was in prison, through his lawyer. I wanted to have an interview with him about his opinion of my performance that night or just to exchange impressions. He did not accept that meeting. He has never given an interview in all these years. I know that he is happily living on the Costa del Sol and his last appearance was when Franco’s remains were exhumed. The Civil Guards who entered Parliament that night were very young, they worked in a workshop where Civil Guard cars were fixed. They did not have much idea of ​​what they were going to do and many of them the first thing they did was look up at the frescoes in the congressional chamber because it was the first time they had been there.

– Were you aware that you were the only one standing and taking photos when the shooting began?

-40 years have passed and I still don’t think why I reacted the way I did. Perhaps because they were times of daily demonstrations, of a great crisis, of ETA attacks … We covered murders almost every day, there were requisitions and we had to hide the rolls. But I don’t know why I behaved like this.

Hydrogen production is planned to be established in the Sakhalin region