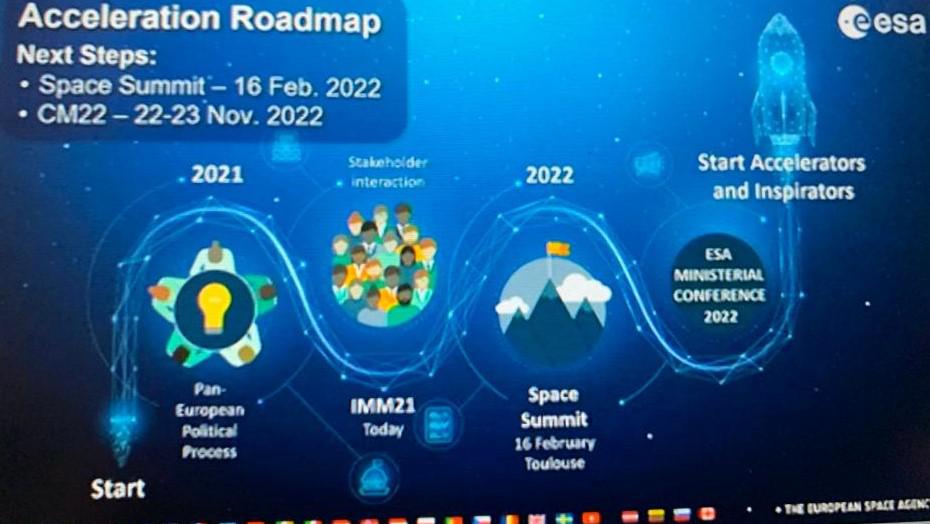 A greener planet, a faster response to natural crises like fires and floods, the protection of European assets in space and the life of astronauts from the risks posed by space debris. They are the main contents of the three ‘accelerators’ identified by the intermediate ESA ministerial meeting, held today in Matosinhos, in Portugal, to take Europe’s space challenges to a more advanced level than the current one in the use of space. Unanimous the resolution adopted by the ESA ministers and contained in the “Matosinhos manifesto” in which, in addition to the three ‘accelerators’, the ESA Council also recognized two “inspirational” themes to strengthen leadership
European in science, technological development and inspiration: an ice moon champion return mission and human exploration of space.

With the resolution and the focus on the three ‘accelerators’, at the end of the meeting the ministers of the member states gave a mandate to the director general of ESA, Josef Aschbacher, to develop governance and funding paths, in agreement with the member states of the European Space Agency. During an online press conference, ESA DG Josef Aschbacher and Manuel Heitor, Minister for Science, Technology and Higher Education of the Portuguese government, who chaired the intermediate ministerial meeting of ESA, illustrated the details of the intermediate ministerial. The Resolution to Accelerate the Use of Space in Europe strongly supports the ESA Director-General’s 2025 Agenda vision of building on Europe’s excellence in space and realizing its full potential, for the benefit of all on Earth and of European citizens, in particular.

“Space is the place where the increasingly intense global competition for technological innovation will take place, economic leadership and European autonomy. It is urgent that Europe accelerate the use of space “Aschbacher noted at the end of the meeting in Matosinhos. “The mid-term ministerial meeting recognized the need for a renewed European space ambition. The three accelerators and the two inspirers – Aschbacher said – will be strategic steps for Europe to make full use of space for its citizens, creating economic opportunities. This gives me a clear mandate as ESA Director General in view of the European Space Summit. “

Portuguese minister Manuel Heitor also said he was convinced that “we must all ‘make room for Europe’ in order to ensure that European citizens become an integral part of future space developments in Europe. This means saving lives, predicting natural disasters, prevent fires and, in general, addressing climate change, the drastic reduction of biodiversity, the health and economic crisis, uncertainty and risks, as well as guaranteeing safety and the conditions of security for our populations “.” This – Minister Heitor observed – can only be addressed whether space initiatives in Europe move forward in line with digital and green transitions “. “The large-scale nature and fast pace of the climate crisis and other challenges mean that no European nation will be able to tackle them effectively alone. Space has enormous untapped potential to help address these challenges and now an acceleration in the development of European space capabilities is urgently needed. “

The Intermediate Ministerial Meeting has been defined “a milestone” in the European roadmap which has as its next appointment the European Space Summit to be held in Toulouse in February 2022 and in view of the next ESA Council meeting at ministerial level. As a first priority, ESA will start working on the accelerator theme referred to in the Portuguese ministerial “Space for a Green Future”, i.e. the European Space Agency will work to enable people to better understand the current state of health of the planet and develop scenarios and solutions for sustainable life on Earth through a digital twin of our planet that will contribute to achieving climate neutrality with zero emissions net of greenhouse gases by 2050. With the second accelerator “Rapid and Resilient Crisis Response”, the ESA will then aim
to support governments to act decisively on the crises Europe faces, from floods and storms to fires, without prejudice to the sovereign competences of the Member States and the competences of the European Union. Third, the “Protection of Space Assets” accelerator will have the goal of safeguard astronauts and ESA resources from the interference of space debris and space weather conditions. The concept of the three accelerators and the two inspirers has been defined in recent months, based on the advice of a high-level advisory group to the ESA Director General. The “Final report on accelerating the use of space in Europe” was published in early October and its recommendations were presented by the ESA Director General to member states at the ESA Council meeting held later this month. . PAC-MAN MUSEUM +: announced a new collection for console and PC