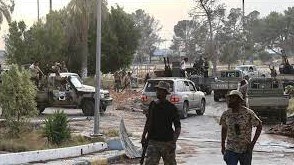 The Somali army announced the elimination of 50 members of the terrorist “Al-Shabab” movement, in an air raid on the village of “Aad” in Galmudug region in the center of the country.
The Somali army said in a statement that the air raid targeted military strongholds of Al-Shabab fighters in the town of Aad, and resulted in the killing of 50 terrorist elements.
Yesterday, the US military carried out an air strike against Al-Shabab, the first since President Joe Biden took office at the end of January, according to the Pentagon.
Pentagon spokeswoman Cindy King said that the military command for Africa “AFRICOM” carried out an air strike on the outskirts of Galkayo, 700 km northeast of Mogadishu, on Tuesday.