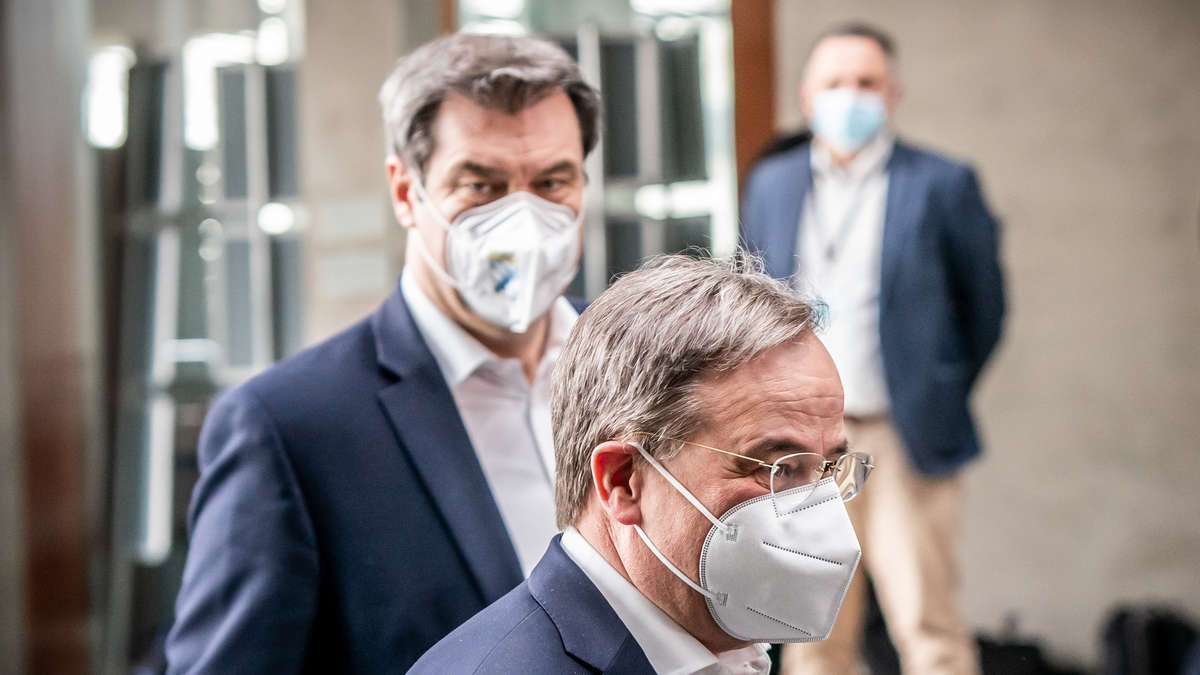 Who will be the Union’s candidate for chancellor? A conversation between Laschet and Söder on Sunday did not lead to any result. In the current polls, the Union is doing something, despite the power struggle.

Berlin – The Union’s K question could still not be resolved, although Armin Laschet and Markus Söder wanted to decide on it by Sunday at the latest. But what effects does this power struggle within the CDU / CSU have on the polls? Apparently rather a positive one, because the Union put in the Sunday trend that the polling institute Kantar weekly for the Picture on sunday increases this week by two percentage points. It now comes to 29 percent.

As in the previous week, the Greens are at 22 percent and remain clearly the second strongest force. The SPD comes back to 15 percent, the AfD unchanged at eleven percent, and the FDP remains at nine percent. The left would receive eight percent of the vote this week, losing one point compared to the previous week. The other parties would give six percent their vote – also a loss of one point. The question is whether the decision of the candidate for chancellor at the Union will have an impact on the poll results?

The Union’s K question: Markus Söder is way ahead of Armin Laschet in surveys

According to the latest survey, this is very likely because a clear picture emerges. CSU boss Markus Söder is in all surveys in front of his opponent Armin Laschet. According to the RTL / ntv-Trend barometer, 37 percent of all voters could imagine voting for the Union with a candidate for Chancellor Söder. In the case of a top candidate Laschet, the Union could currently only count on the votes of 13 percent of all respondents. Even the supporters of the CDU / CSU are not very convinced of the North Rhine-Westphalian Prime Minister Armin Laschet. Only 32 percent of the voters, who voted for the Union in the last general election, would do so again if Laschet stood as candidate for chancellor. If the Bavarian Prime Minister Söder were the candidate for chancellor, 73 percent would vote again for the Union. The data was collected by the market and opinion research institute Forsa from April 7th to 10th, 2021; 2024 people were interviewed.

In another survey by the polling institute INSA on behalf of the picture it looks just as bad for Armin Laschet. In this, the approval ratings of 22 politicians were determined. The question: “To what extent do the following politicians represent your interests?” Söder was able to place himself in first place here – he is even just ahead of Chancellor Angela Merkel. CDU boss Laschet only made it to twelfth place. In the last survey, Armin Laschet was still in ninth place. Various top politicians: from other parties, such as the top duo of the Greens Annalena Baerbock and Robert Habeck, Sahra Wagenknecht (left), Vice-Chancellor Olaf Scholz (SPD), and FDP leader Christian Lindner are in the survey in front of Laschet. Party colleague Friedrich Merz is also one place in front of the Prime Minister of North Rhine-Westphalia. 2171 people across Germany took part in the survey.

Is Armin Laschet unfit for chancellor? Only 29 percent trust him to be chancellor

In the survey: “Who would qualify as Federal Chancellor: in?” Des ZDF-Political barometers 61 percent of those surveyed do not trust Armin Laschet to be chancellor. Only 29 percent of all respondents could imagine him as Chancellor (the rest 100 percent here and in the following “don’t know”). Among the CDU / CSU supporters, it looks at least a little better for the CDU boss. 43 percent of the Union voters: inside consider him suitable for chancellor, but 49 percent are of the opinion that he is not suitable.

Markus Söder is much more popular. 63 percent of all respondents and 84 percent of CDU / CSU supporters consider the Bavarian Prime Minister to be suitable for chancellor. Of those surveyed, 31 percent consider him unsuitable and twelve percent from their own ranks. The survey was carried out by telephone from April 13th to 15th, 2021 among 1,292 citizens who were eligible to vote at random. The Union has better chances in the federal election in September with Markus Söder as candidate for chancellor. The decision has not yet been made, however, and it could just as easily be Armin Laschet, since as CDU leader he actually has the prerogative of the candidacy for chancellor. (dp)

After killing Analía Maldonado, the femicide stole $ 200 thousand and US $ 1,500