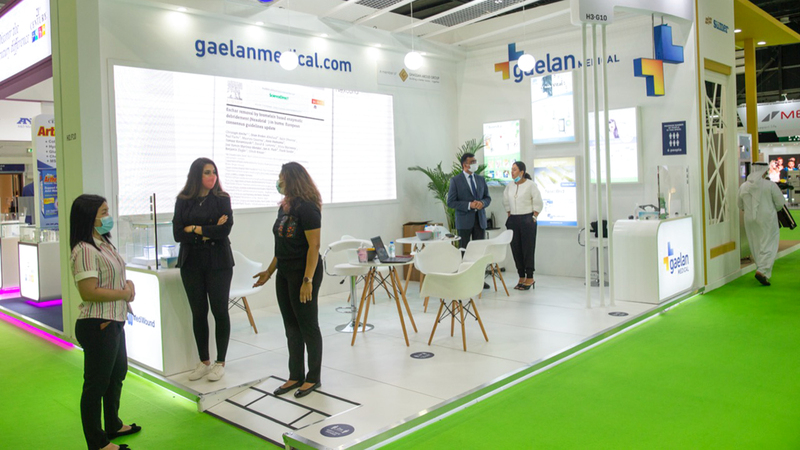 Prior to its conclusion yesterday, the Arab Health Conference and Exhibition unveiled a smart hat-shaped device for treating depression and obsessive-compulsive disorder, and for smoking cessation.

The hat is the first of its kind in the world because it is characterized by the use of artificial intelligence and transcranial magnetic stimulation, by reaching deeper areas of the cerebral cortex.

The display of the device in the exhibition was followed up by a public inquiry about the extent of its use in treating other psychological diseases.

Ammar Martini, a member of the board of directors, the medical scientific officer at Gilan Medical Corporation, affiliated with the Ghassan Aboud Group, said, “The new device uses innovative, non-surgical technology, without pain, discomfort, or feeling uncomfortable from the patient, or side effects after the treatment session. He explained that “the smart hat provides treatment to patients while they are inside the clinic, while they are in a sitting position.”

He pointed to obtaining approval from the US Food and Drug Administration and the European Quality Certificate, which are two of the highest international health institutions concerned with registration and accreditation.

The device’s technology is based on stimulating areas deep inside the brain, by exposing them to a magnetic field that excites or suppresses areas of deep nerve cells in the brain.

Martini explained that the device works to change the psychological state of a person suffering from depression or obsessive-compulsive disorder, and helps to quit smoking.

The technology used in the device stimulates areas in the brain to treat the following disorders: major depressive disorder, obsessive-compulsive disorder, and smoking cessation.

This technology stimulates neurons in the brain as deep as 3.2 cm inside the brain, covering a larger area in order to get the best result from the treatment session. A particular helmet is used, in order to reach greater depth and coverage, to obtain the best results. The treatment sessions last for five days a week, each lasting 20 minutes, and the treatment period lasts between four and six weeks, depending on the doctor’s diagnosis of the patient’s condition.

Regarding the advantages and benefits of the technology used, compared to traditional methods, Dr. Ammar Martini said, “Some patients cannot tolerate the drugs, due to their side effects that result in depression, anxiety, weight gain, impotence, suicidal ideation, nausea, and insomnia.”

He added that several studies have proven that the response rate of people who were treated using this technology was better, and that they returned to their normal lives.

• The new device uses innovative technology, is non-invasive, and without pain or discomfort.