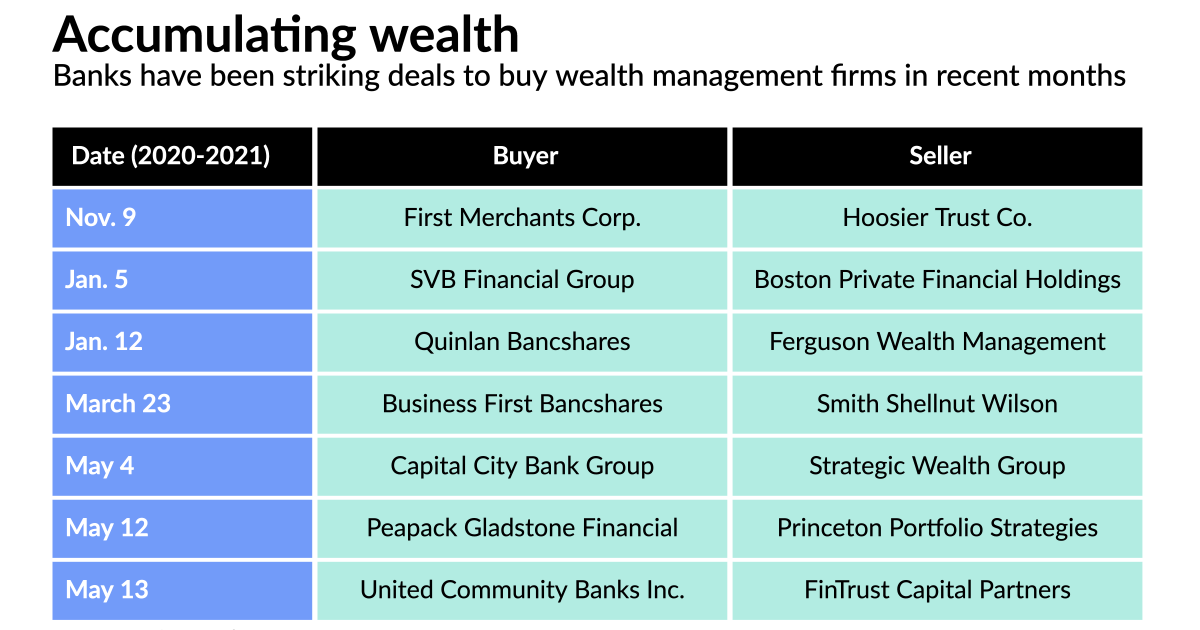 Digital wealth management has traditionally been the purview of high-tech startups and financial industry heavyweights like Merrill Lynch or JPMorgan Chase. Smaller institutions, by contrast, have favored a model that relies on personal relationships between clients and financial advisors.

Now, the $ 7.7 billion-asset Amerant Bancorp in Coral Gables, Florida, is looking to expand its share of the market through a $ 2.5 million investment in Marstone, a digital wealth management fintech, as part of a $ 5 million Series A financing round that pushed Marstone’s total funding past $ 20 million.

Marstone enables Amerant and other banks to compete with larger wealth management providers by providing a digital alternative to a human advisor.

“Typically, wealth management relationships have been centered around dedicated sessions. Advisors answer questions and offer suggestions, ”Jerry Plush, Amerant’s CEO, said. With Marstone, “you’re looking at optionality. Clients can access information without the meetings or interactions, if they choose. “

Amerant’s investment in Marstone came a month after it partnered with the firm to provide a suite of digital wealth management tools to customers.

Banks have shown increased interest in wealth management over the past year. The extra attention has manifested primarily in acquisitions of wealth management firms that add assets under management and fee income to the balance sheet. At least seven such deals have been announced since November.

Additionally, JPMorgan Chase announced this month that it had paid an undisclosed sum for Nutmeg Savings and Investment, one of the UK’s leading digital wealth management platforms, in a move aimed at upgrading its digital banking capability there.

Marstone, of Providence, Rhode Island, was founded by Margaret Hartigan, a veteran Merrill Lynch financial advisor who serves as CEO, and Robert Stone, its chief creative officer, in 2013.

Plush, who was hired as Amerant’s CEO in March, had previously followed the fintech’s progress as a private-equity investor but had not taken a stake in the company. Accelerating the bank’s digital transformation has been a key objective, he said.

“When we reconnected after I got here, I was impressed with the continued progress Marstone had made developing their solution,” Plush said. “We made this [partnership] one of our top priorities in my first 100 days. Based on the demonstrations we saw … all of our team was very impressed with the solution. “

Amerant announced its decision to adopt Marstone’s platform May 27. The two companies expect the partnership to go live this summer. According to Hartigan, Marstone can set up a bank or wealth management firm within 45 days of signing an agreement. That accessibility is a key selling point with smaller financial institutions.

Plush is not looking to depart from that approach, but rather to supplement it. Wealth management is a major business line for Amerant, generating $ 4.6 million in fee income for the three months ending March 31, and $ 17 million for all of 2020.

“A lot of customers in the private banking and wealth management space want to rely on the expertise and advice” of an advisor, Plush said. At the same time, giving clients access to data and planning tools they can use on their own will make Amerant’s offering more compelling, Plush said.

The platform’s tool set can also be used by advisors as part of a client session.

Amerant’s footprint covers two of the fastest-growing, most affluent banking markets in the country: South Florida and Houston. Both are seeing inflows of wealthy individuals and small businesses.

While community banks lack the scale of their larger rivals, they make up for it with customer loyalty, said Adam Green, CEO at YieldX, a fintech that focuses on fixed-income investing.

“Community banks are in a unique position as they typically have long-term relationships with their customer base and deliver personalized experiences,” Green said. “Bringing technology into wealth management in community banking enhances the breadth of the customer experience, as it introduces more choices to make personalization even more effective at a faster speed. “

“The end goal is to make this available to our full suite of customers,” Plush said. “It gets planning capabilities into the hands of any customer that wants them.”

Hartigan, too, wants to see Marstone in the hands of as many people as possible, regardless of their financial profiles.

Indeed, though banks make up the majority of Marstone’s business currently, Hartigan said she is working to boost its profile among credit unions.

Marstone has an opportunity to do that, though its appeal is likely strongest among larger credit unions “who have the membership base where likely penetration over time makes it worthwhile and are also… more digitally oriented with memberships that are digitally savvy,” David Mooney, who retired in August as CEO of the $ 14 billion-asset Alliant Credit Union in Chicago, said in an interview.

Plush said he thinks Amerant’s involvement with Marstone will prompt some institutions to take a look. “I would expect others to be curious as to why we did what we did,” he said.

Personal financial management tools like the ones Marstone provides can be a powerful means of tying clients more tightly to their financial institutions, according to Mooney.

Clients who use self-directed tools – especially investment tools – become “larger, stickier and more profitable relationships,” Mooney said. “You’ve got people who’ve made an investment of time and effort. To some extent that increases the switching cost if they feel they’re getting value. “

Still, convincing clients to use the tools financial institutions put at their disposal you have proved challenging.

“A lot of people offer self-directed budgeting and spending tools,” Mooney said. “The reality is there’s very low uptake and even lower active use. It takes some effort to set up and maintain, it takes attention and self-discipline, kind of the difference between intentions and actions. As somebody put it, how many Fitbits are sitting in drawers? “