Sisi: The Renaissance Dam is a matter of national security 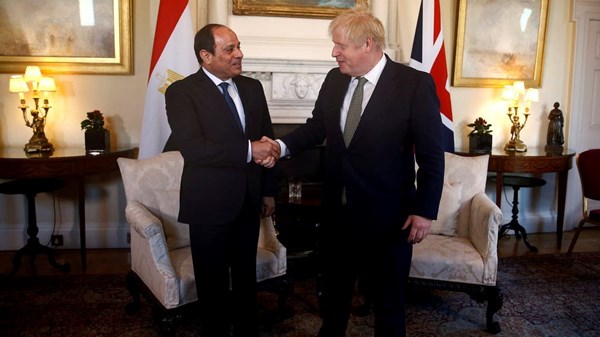 Egyptian President Abdel Fattah El-Sisi confirmed, during a call with British Prime Minister Boris Johnson, that the Grand Ethiopian Renaissance Dam issue represents a “national security issue” for Cairo.
The Egyptian presidency said, in a statement posted on its official Facebook page, that Sisi received a phone call from Johnson, where the two sides exchanged views on the developments of the Renaissance Dam and bilateral relations.
Al-Sisi reiterated, “Emphasizing the paramount importance of this issue as a matter of national security, and Egypt’s adherence to its water rights by reaching a binding legal agreement that includes clear rules for the process of filling and operating the dam.”
The two sides discussed “all issues of bilateral cooperation between the two countries, and means of supporting and strengthening relations between them in all fields, especially the economic, investment and security sectors, as well as the education, health and energy sectors,” according to the statement.
Al-Sisi expressed his “keenness to activate the frameworks for mutual cooperation between the two countries in various fields, transfer and localization of technology, in addition to strengthening political consultation and coordination on regional and international issues of mutual interest, in a manner that reflects the weight and importance of the two countries in favor of achieving peace and stability and facing challenges in the region.”
The two sides discussed developments in a number of regional issues, foremost of which is the situation in Libya, where the British Prime Minister expressed his deep appreciation for the “essential role that Egypt, under the leadership of Sisi, plays towards settling the Libyan issue and its efforts in pushing the political path and restoring state institutions.”
For his part, Johnson affirmed his keenness to continue communicating with Sisi “to enhance consultation and coordination on various regional and international issues in light of the role Egypt is playing to support and consolidate peace and stability in the Middle East and Africa”, looking forward to “supporting and developing bilateral relations with Egypt on all sides.” Asada “.

The US explained the "lethality" of the Russian S-400