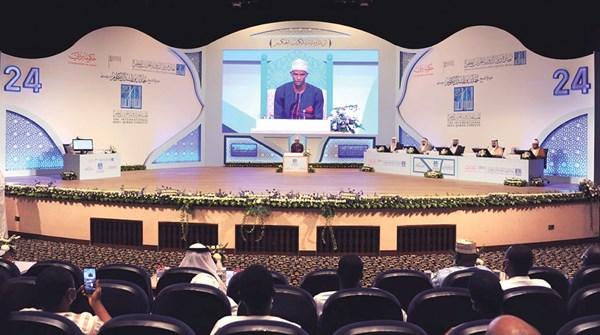 Analysts for the performance of the contestants of the Dubai International Prize for the Holy Qur’an confirmed that the contestant representative of the country of Sierra Leone, Abu Bakr Gallo, is one of the most beautiful voices of the Sheikh Hamdan bin Rashid tournament, may God have mercy on him, and he is also able to imitate the Egyptian way of reciting the Book of God, which is characterized by the beauty of reading and good performance. And the length of the soul and the power of applying the provisions of intonation.
The Sierra Leone contestant is one of those who excelled in performance, as only 3 warnings were given to him in addition to a response to correct a mistake he made, which ensures that his country is in the middle of the table for the current tournament centers, which means a clear improvement in the classification of its participation in the Dubai International Award.
What is noteworthy in the story of that contestant is that when he began memorizing the Noble Qur’an, his father sent him to Mauritania at the age of eleven with one of his relatives to memorize the Qur’an, learn the Arabic language, and memorize the most important texts of the rules of intonation.
He said, “I completed memorization in two and a half years, after which I would return to my country and complete my regular studies until high school. I am currently in my first year at the university in the College of the Qur’an, and I memorized the Qur’an and learned Arabic with the encouragement of my parents.”
He added, “I participated in many local competitions in my country in which I got the first place. Therefore, I was nominated afterwards to participate in international Quranic competitions, as I participated in 2015 in an international competition and now I participate in the Dubai International Competition.”
The competition had opened its sixth day with a recitation of the honorable citizen reciter Walid Muhammad Al-Marzouki, then the examination committee headed by the Honorable Sheikh Dr. Salem Muhammad Al-Dubi Al-Mazmi, Chairman of the Jury, began listening to the competing contestants, at the Culture and Science Symposium in Dubai.
Four contestants ran the tests, they were Abu Bakr Gallo from Sierra Leone, Muhammad bin Abdul Rahim bin Abdullah bin Muhammad al-Shizawi from the Sultanate of Oman, Mustafa Sall from Senegal, and Muhammad Makka Sisi from Liberia.

The biggest prize in the world
The contestants confirmed that the Dubai International Qur’an Award is one of the most important and largest global Qur’an prizes, and is characterized by good organization and strong competition, especially for the first ranks. Rulings of intonation and good performance.
The contestant, Hafidh Muhammad bin Abdul Rahim bin Abdullah bin Muhammad al-Shizawi, representative of the Sultanate of Oman, who is studying in the fifth year at the College of Engineering at the United Arab Emirates University, praised the efforts of the Dubai International Qur’an Prize and its continuation in organizing this competition and not being interrupted under these circumstances, so that this competition is not interrupted and interrupted. Good for the keepers of the book of God.
He pointed out that he began memorizing the Noble Qur’an at the age of nine, and sealed it at the age of seventeen. He has six brothers, three of whom memorize the Holy Qur’an, because of the encouragement of his parents, and his older brother, who was keen to join the memorization centers.
The contestant, Mustafa Sall, representative of Senegal, stated that he was born in the UAE, and is now studying in his third year at Jumeirah University in Dubai at the College of Islamic Studies and Arabic Language. He said: “My mother was keen to memorize the Book of God with my three brothers, and we all memorized the Qur’an with the grace of God and then thanks to her, and that is why I started my journey with memorization at the age of six at home with her.