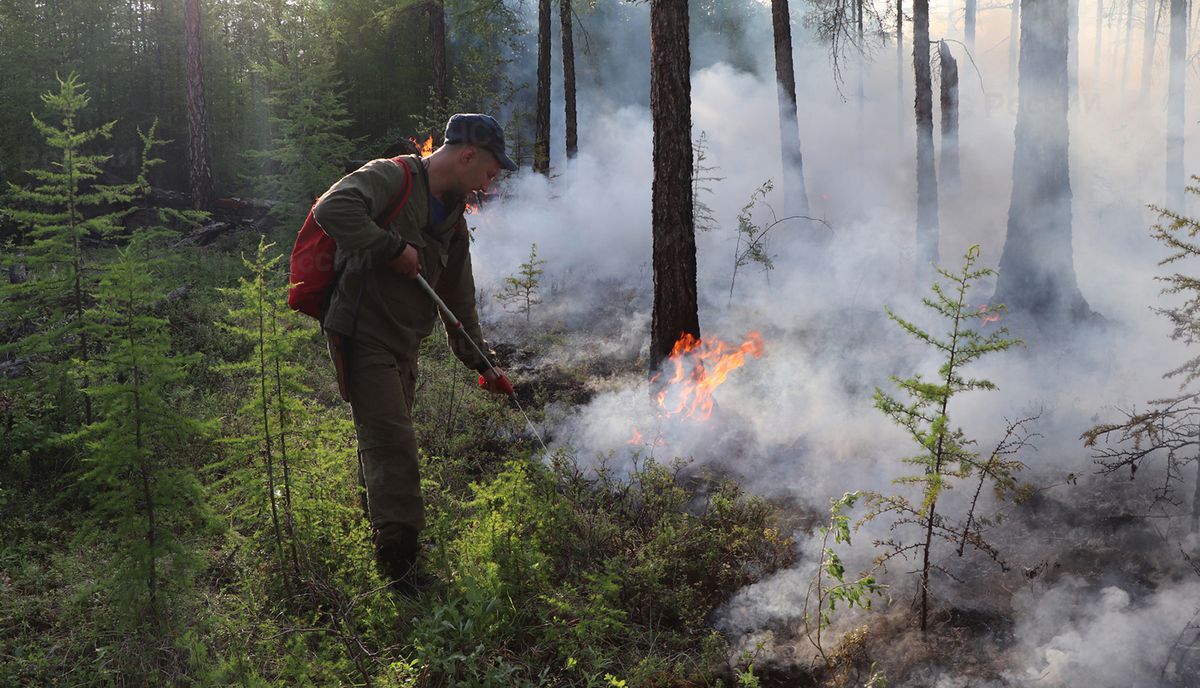 A thick, almost chewy haze covers Yakutsk, capital of the Russian republic of Sakha-Yakutia, geographically located in Siberia. The smoke from the fires that have already burned more than 1.4 million hectares envelops what is considered to be the coldest large city in the world, coloring the environment a sad ocher tone. The flames do not threaten Yakutsk, according to the Russian Forest Protection Service, but the more than 300 active fires have already reached the Lena Pillars National Park, declared a World Heritage Site by UNESCO, considered unique for its rock formations, flora and fauna; also the mythical road of bones, a road built decades ago by prisoners condemned to their remote gulag.

Sakha-Yakutia, the largest region of Russia (comprising 20% ​​of the territory of the Eurasian country) and which has been administratively included in the district of the Russian Far East, is located more than 50% on the territory of the Arctic Circle, which is warming at least two and a half times faster than the global average rate, according to experts. The strategic region is also settled on the permafrost soil, the centuries-old frozen layer of the subsoil, whose thawing, accelerated by global warming, is already beginning to have serious consequences.

The fire season has been wild this year in this part of Siberia, which, like much of Russia, has been experiencing a sweltering heat wave for weeks. Moscow reached its hottest day in the last 120 years a few days ago, with 34.7 degrees Celsius. Yakutsk, more than 8,000 kilometers from the Russian capital and which is close to 50 degrees below zero in winter, has been 35 degrees.

The effects of the climate emergency are palpable in this region of northern Siberia, which breaks records for high temperatures year after year: last year Verkhoyansk, a small town in the Arctic circle, which can register 60 degrees below zero in winter and competing with another from Sajá-Yakutia (Omyakon) for the record of the coldest in the world, registered 37.4 suffocating. The heat, which has already changed part of the orography of the area, combines with increasingly dry soil and fuels forest fires. Fires are part of the ecology of the Arctic, according to a report by the European Center for Medium-Range Weather Forecasts, which nevertheless warns that their increasing frequency and intensity are “worrisome” and that they can contribute to the thawing of permafrost.

Authorities have declared a state of emergency and deployed military planes and helicopters to try to extinguish the flames. And experts warn of the possible long-term impact of Siberian fires, which help release greenhouse gases stored in the frozen tundra. Already in 2019 and 2020, the Yakutia forest fires caused the release of record amounts of these gases in the region, according to the Copernicus Atmosphere Monitoring Service (CAMS), part of a European Union observation program.

The situation is “desperate”, describes Grigory Kuksin, head of the Fire Department of Greenpeace Russia, which has been deployed in one of the areas with several active fire sources. “Now everything depends entirely on the weather, because there were not enough forces to tackle the problem at an early stage,” he laments. “In Yakutia, the situation is worse than in previous years. It has improved somewhat due to the rains, but they cannot extinguish fires in large areas, “says Kuksin, who assures that although global warming is aggravating Russia’s vulnerability to forest fires and also to their spread, most fires they are provoked.

The Defense Ministry has sent several planes and helicopters to join the more than 2,600 firefighters working to put out the flames in Yakutia. They are concentrating on 134 foci that cover some 900,000 hectares and that may threaten populations. But they have stopped extinguishing work on another 107 fires that cover an area of ​​about 649,000 hectares due to the danger to firefighters and volunteers and the relative remoteness of inhabited areas.

Vasilisa Egorova and her daughter Nastia briskly walk through Yakutsk’s Lenin Square, in the center of the city of 312,000 inhabitants, the most populous in the area. Egorova complains that the girl’s eyes sting from the smoke and criticizes what she considers to be “insultingly low” preparedness by the authorities to deal with the fires. “Year after year the problem increases and those responsible for the region do not learn. This is a territory rich in resources, our house, the only thing we have and if we don’t take care of it, terrible times will come ”, he laments. This is the second consecutive July that intense heat and wildfires have devastated this region, according to state reports.

Criticisms of the approach to the fires have flooded these days the social networks of the region, where the activist and blockade Roza Dyachkovskaya led an appeal at the beginning of the week to the actor Leonardo DiCaprio and his foundation, which on other times has launched a campaign and attracted attention. about the fires in Siberia and that this time he also promised to study the situation. Dyachkovskaya’s request and her comments on social networks have caused a wave of rejection and retaliation from the authorities and those responsible for extinguishing the fire, who have criticized the activist and blocker, considering that she has left Yakutia in a bad place. wash them dirty rags In view of all. After calls from several officials, the young woman has deleted her publications on social networks.

But the problem has not disappeared, warns Kuksin of Greenpeace, which also criticizes the “scarce resources” to fight the fire. The data, as is traditional in Russia, are opaque, but according to Greenpeace calculations and studies, some 30,000 million rubles (about 343 million euros) a year are allocated for fire suppression and prevention; According to his studies, about 100,000 million (1,143 million euros) are needed. “If there were resources to extinguish all the fires in time, it would be possible to react. And, as there are not enough funds, there are not enough people: pilots, paratroopers, observers, firefighters ”.

Yakutia is burning, but it is not the only Russian region that is being ravaged by flames. There are major fires in other areas of Siberia, such as Krasnoyarsk and the Irkutsk, Chukotka and Kamchatka region. In central and northwestern Russia the situation is especially difficult; in Chelabinsk, where the flames have affected some 14,000 hectares, an area roughly the size of Kuwait, several settlements were evacuated and one of their residents, an elderly man who refused to leave his home, died on July 10.