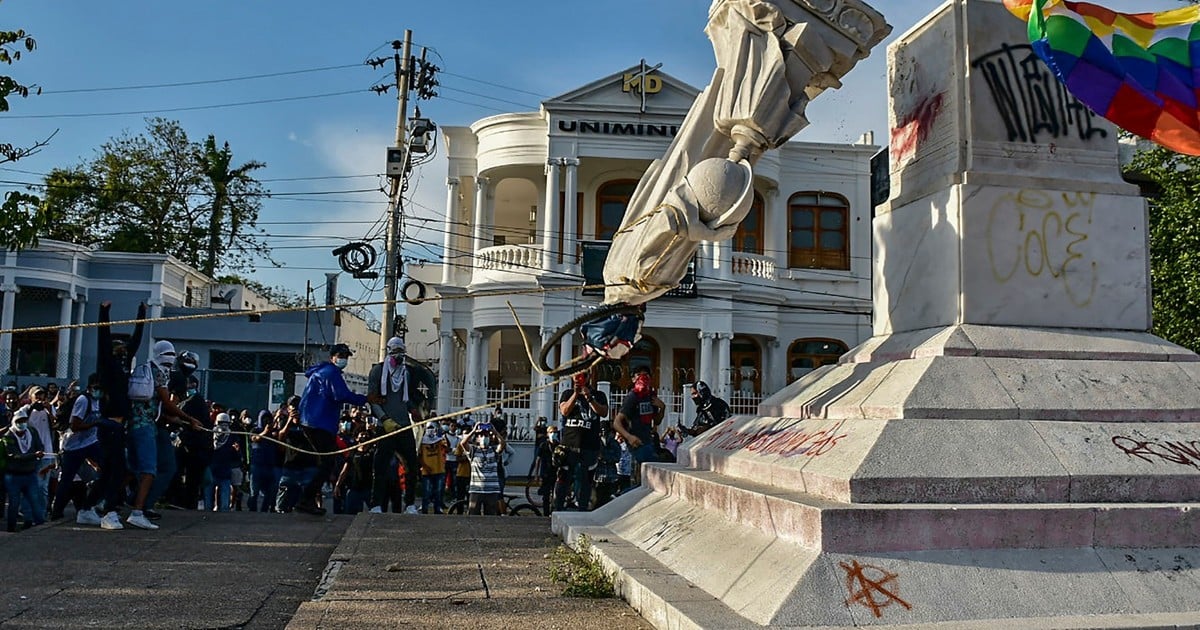 Two months after the start of the national strike in Colombia, groups of protesters gathered in various areas of the country to commemorate the day of protests. In the city of Barranquilla, they demolished the statue of Christopher Columbus.

To the cry of “Murderous Columbus”, they pulled several ropes to demolish the monument located on Calle 56 between 50 and 47, in the city in northern Colombia.

Then they wrote slogans on the rock, like the legend “For our dead”, and they cut off his head and hands.

🔴⚠️ The statue of Christopher Columbus has just fallen in the city of Barranquilla.

History is ours and the peoples make it. This is, again, an affront to the symbols and narratives of the establishment. And how beautiful that Wiphala! pic.twitter.com/2BE3IxpaxT

As described by the local media The Herald, the monument was donated by the Italian colony of Barranquilla in 1892, in commemoration of the 400 years of the discovery of America. This figure was kept in a workshop, awaiting its location, between 1892 and 1910.

The statue was located between 1910 and 1937 in the current Paseo Bolívar. Later, it was transferred to the Plaza de San Nicolás, where it remained until the mid-1990s.

At the cry of “Colón murino”, they pulled several ropes to bring down the monument. Photo: AFP

The mayor of the city, Jaime Pumarejo, said in a Twitter message that “violence only generates more violence” and invited protesters to “shed hatred and build a better country.”

“We have not repressed – and we will not – the peaceful protest, but we do order to continue identifying, capturing and prosecuting those who commit acts of vandalism and terrorists,” the president warned.

Violence only breeds more violence. I invite you to shed your hatred and build a better country. We have not repressed – and we will not! – peaceful protest, but we do order to continue identifying, capturing and prosecuting those who commit acts of vandalism and terrorists. pic.twitter.com/O9Bo007v9A

For his part, the indigenous senator Feliciano Valencia wrote in the same social network: “Today the monument to Christopher Columbus in Barranquilla was demolished. The capital of the Atlantic resists and also struggles to redefine the historical memory of the country.”

During the national strike, groups of Misak aborigines also demolished the statues of the Spanish conquerors Sebastian de Belalcázar in Cali (southwest) and from Gonzalo Jiménez de Quezada, founder of Bogotá.

Two months after the outbreak that left more than 60 dead, there were new clashes between protesters dissatisfied with the government of Iván Duque and the police,

The protests led to clashes with the security forces in various cities but no injuries were reported, according to official reports.

The monument was donated by the Italian colony of Barranquilla in 1892, in commemoration of the 400 years of the discovery of America. Photo: AFP

The riot squad intervened “on 20 occasions in various cities,” the general director of the Police, General Jorge Vargas, reported in an audio sent to the media.

Three police installations in Bogotá, Medellín and Pereira were attacked during the day. A dozen public transport vehicles were also “vandalized,” according to Vargas.

After tearing down the statue, they wrote slogans on the rock, such as the legend “for our dead.” Photo: AFP

In the capital, dozens of people drew silhouettes of civilians killed by the military in the conflict of more than half a century that has not ended in front of the peace court, despite the agreement signed in 2016 with the FARC guerrilla, repeatedly breached by the Government of Duque, according to complaints from various human rights defense organizations.

Meanwhile, in Medellín, protesters from the so-called “front line” were harshly repressed by hydrant tanks and agents from the riot squad.

Protesters drag the head of the statue of Columbus, after toppling it during the protests, in Barranquilla. Photo: AFP

What began on April 28 as a protest against a government plan to raise taxes on the middle class turned into an unprecedented mobilization.

Protesters They demand a reform of the police and a more supportive state to deal with the economic ravages of the pandemic, which raised poverty from 37% to 42% of the population.

Although the most visible front of the mobilizations suspended the protests until July 20, other dissatisfied sectors keep their marches, concentrations and blockades active, which according to the Government have brought the pandemic to record levels of deaths and infections.

On the other hand, the Colombian authorities continued the intense search for the perpetrators of the attack on the helicopter in which President Iván Duque and two of his ministers were traveling, who were unharmed. And doubts are beginning to arise about whether there were failures in the president’s security and whether weapons linked to the Armed Forces of Venezuela were used.