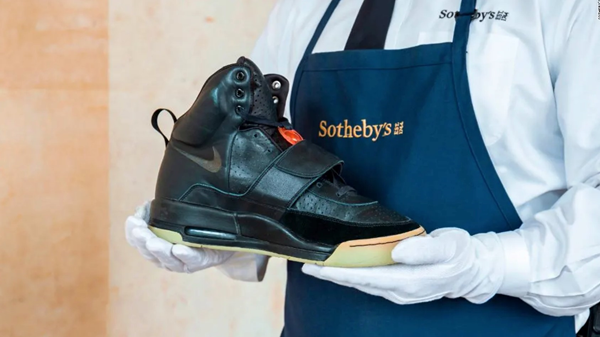 The first Nike Yeezy sneakers, worn by American singer Kanye West, are publicly for sale for more than $ 1 million.

The Nike Air Yeezy 1, which the American rapper made his debut at the 50th Grammy Awards in 2008, will be among the most expensive sneakers to have ever appeared on the market, according to Sotheby’s, which organizes the sale.

The pair of shoes were described in a press release as “one of the most valuable and sought-after sports shoes in existence”, and the shoe will be launched as part of a private sale after showing it in Hong Kong later this month.

Sotheby’s did not disclose a specific asking price, although it said it had valued the item “in excess of $ 1 million.”

Although there is no known record of sales of private sneakers, the seven-figure price could well exceed the current price record of $ 615,000 set at Christie’s in May / 2020 for a pair of Nike shoes. Air Jordan 1, “signed by NBA legend, Michael Jordan, in 1985.

The prototype of the Yeezy shoe, introduced to the market by sneaker collector Ryan Zhang, comes in a size 12, the size of a West shoe.

According to Braham Wachter, head of streetwear and modern collectibles at Sotheby’s, the rating is derived from the brand’s cultural influence.

“This pair of shoes is crucial to the development of the Yeezy franchise, which has become one of the most important sports footwear and lifestyle brands in history,” Wachter said by email.

Rumors had circulated about the upcoming West shoe line for nearly a year before his performance at the Grammy in 2008. When the rapper stepped onto the stage wearing a pair of smooth black leather shoes, the “Nike” logo caused a sensation among fans and fans of sneakers.

At the time, West had just released his third studio album, which had sold nearly a million copies.

During his emotional performance at the concert, he performed the song “Hey Mama” to honor his mother, Donna West, who died just three months ago, according to “cnn”.

The design in which West first appeared during the Grammy Awards was not brought to market. But in 2017, a pair of shoes appeared for sale in the collectible sneaker store, selling for $ 100,000.

The sneaker models are remnants of a creative partnership that no longer exists, as Yeezy transferred its operating empire from the “Nike” brand to “Adidas” in 2013.

Conflict in Gaza: this is the ‘iron dome’, the Israeli defense system that intercepts rockets

How to add gender pronouns to your Instagram profile