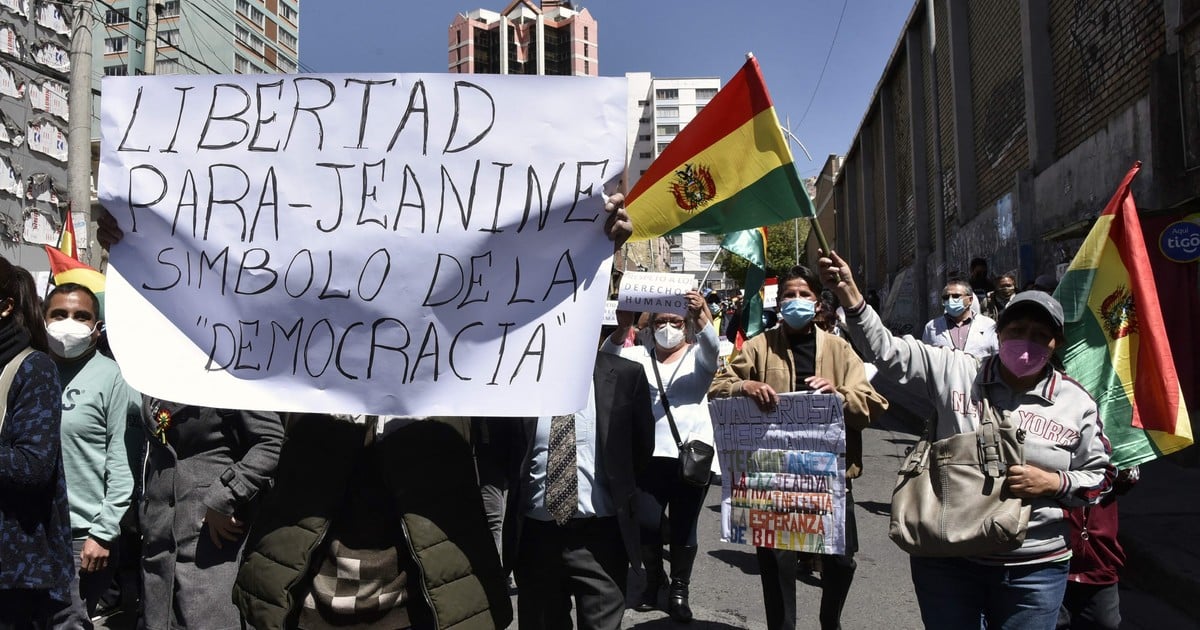 A march called by the Permanent Assembly of Human Rights of Bolivia (APDHB) to request that the former interim president Jeanine Áñez defend herself in freedom in the processes initiated against her ended this Wednesday with tensions between that group and another opposed to the former president. .

The mobilization was led by the president of the APDHB, Amparo Carvajal, together with the children of Áñez, Carolina and José Armando Ribera, as well as the president of the departmental Legislative Assembly of the eastern region of Santa Cruz, Zvonko Matkovic, and dozens of people of citizen platforms that carried Bolivian flags.

Helped with a cane, the 82-year-old activist walked from the APDHB headquarters in the center of the city of La Paz to the women’s prison in the Miraflores neighborhood, to the east side of the city, accompanied by dozens of people from citizen platforms opposed to the government of Luis Arce.

Upon reaching the jail, the mobilization ran into another group at the gates that, carrying the multicolored indigenous flag, the Whiphala, demanded “justice” for the deaths in the so-called Senkata and Sacaba massacres during the 2019 revolt that led to then President Evo Morales to resign and leave the country after denouncing a coup.

Followers of former president Añez ask that she be released from jail. Photo: AFP

These protesters also demanded that Áñez remain in prison, and threw eggs and projectiles at Carvajal.

The police had to protect the activist and escort her to leave the scene.

Both groups then exchanged insults and shoves, and opponents of the former right-wing president smashed each other’s banners.

In the midst of the clashes, opposition activist Guillermo Paz was left bleeding when he was hit by an object on his forehead.

The former interim president of Bolivia, Jeanine Áñez, enters on Tuesday, with her daughter Carolina Ribera, a medical center for tests in La Paz. Photo: EFE

Paz blamed the attacks on the party of Evo Morales and the current president Arce, the Movement for Socialism (MAS). And he accused him of sending “violent activists” against the march that asked Áñez to defend himself in freedom.

For his part, Freddy Rojas, who identified himself as the leader of the Senkata “autoconvocados”, a group related to the MAS, said that they mobilized “to demand justice” for the 2019 deaths and to protest against alleged “privileges” that they assure that Áñez has in prison.

The former interim president has been imprisoned since last March within a process initiated against her at the behest of the ruling party that accuses her Of crimes such as conspiracy, terrorism and sedition for the alleged “coup” of 2019.

The MAS considers that the departure of Evo Morales from power in 2019 was due to a coup d’état. His detractors argue instead that the crisis was the result of an alleged fraud in the presidential elections of October of that year – finally annulled – for the benefit of the then president.

The controversy between those who say it was a “coup” and those who maintain that there was “fraud” was accentuated after the recent presentation of the report of a group of experts sent by the Inter-American Commission on Human Rights (IACHR) that verified serious violations during the crisis of 2019 in Bolivia.

Although the group did not investigate whether there was a coup or fraud, the Arce government and the opposition took fragments of the report to support their respective versions of the crisis.

Áñez’s health was controversial again due to recent visits to medical check-ups in which she was seen weak and deteriorated, while the Prison Regime insist that he is “stable” and his chronic diseases can be treated in prison.

Over the weekend, the former interim president wounded her arms that the government described as “scratches,” while her family said she required stitches.

Áñez, who suffers from high blood pressure and anxiety-depressive syndrome, asked several times to be allowed to defend himself in freedom or change the jail to house arrest, which he was denied.

In some prisons in Bolivia, in the last hours, pronouncements by inmates who demand “equal treatment” and denounce alleged “privileges” of the former president, a version echoed by some government officials to deny that their rights are being violated.