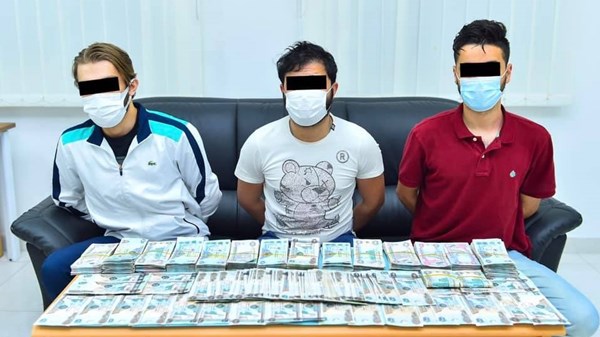 The Criminal Investigations and Investigations Department of the Sharjah Police General Command managed to arrest three people of Arab nationality within a gang headed by a person residing outside the country, who proficiently stole their victims and seized their money, through its dealings with two separate reports after the victims reported that they had been robbed in the same manner. The criminal, by defaming them after agreeing with them to sell them a car, and then seizing their money allocated for the purchase by stealing and escaping from the place.
In detail, Colonel Omar Abu Al-Zoud, Director of the Criminal Investigation Department at Sharjah Police, explained that the department had received a report from a person stating that he had stolen an amount of money from inside his vehicle, as the complainant stated that he had agreed with a person residing outside the country, to buy a car from him And after agreeing with him on the price, that person informed him that someone from his side would meet him to receive the agreed amount and then complete the purchase, and indeed the person came to the place and time specified in Sharjah, and after I showed him the amount in my possession while he was in my vehicle, he kidnapped the money and fled very quickly to A car was parked far from the place where he got into and quickly disappeared from sight.
Colonel Boual-Zoud also stated that a similar report had been received to the administration in the same manner and the same method followed in the first case of theft, and within a close period of time, and in light of that, a team of criminal investigations and investigation officers began to follow up the two reports, as they were able, after the search and investigation procedures, to access the identity of the perpetrators and arrest the perpetrators. Three of them, and they all confessed to their participation in the case listed under the number of the first communication submitted at the Buhaira Comprehensive Police Station, with the difference and diversity of their roles in the case between theft and mediation in the transfer of stolen money, and the investigation revealed the involvement of the first accused (M.S.) in addition to the mind The manager is an Arab person residing outside the country by participating in the other report received by the administration, and the team members were able to control sums of money in their possession, as these sums were withheld until the completion of the legal procedures related to them, and based on those data reached by the security team, and after admission The perpetrators, due to the crimes attributed to them, were arrested and referred to the Sharjah Public Prosecution.
The Director of the Criminal Investigations Department at Sharjah Police indicated that the method used by the gang members was a criminal method similar in way to stealing the money of others, calling on members of the public to avoid dealing with unidentified persons and with those who use international phone numbers to communicate with them on social networking sites and the necessity Requesting their data and what proves their personal identities, especially in the sale and purchase operations so that they are not a victim in the hands of criminals and fraudsters, and he also called on everyone not to possess large sums of money in such transactions so that they are not exposed to theft or assault with the aim of theft, stressing that all security services will remain vigilant to confront For such operations, in order to preserve the security and safety of society.

Helsinki | Homeless young people immediately found their way to the new temporary accommodation on Sturenkatu: “It may be almost full next week”