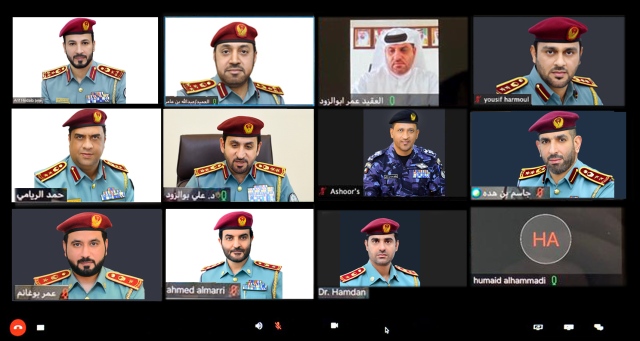 The Sharjah Police General Command announced the intensification of its preparations and the readiness of its personnel to receive the night of the 27th and 29th of the holy month of Ramadan, and the blessed Eid Al-Fitr holiday.

During the meeting, which was held through the visual communication feature, the police reviewed the comprehensive security and traffic plans that were prepared for the night of the 27th and 29th of Ramadan and the blessed Eid al-Fitr holiday, by the competent departments. And the main streets within the city of Sharjah, the eastern and central regions, and the regulation of traffic in all squares, and near the squares surrounding places of worship, in order to maintain calm, flow and order in general.

The meeting indicated that Taraweeh and Tahajjud prayers will be restricted to holding them inside the campus of mosques only, and it will not be allowed to be performed in the squares and roads surrounding mosques throughout the emirate, in order to reinforce the rules and foundations followed regarding preserving the public health and safety of community members in accordance with the precautionary and preventive measures in place in the state, to the limit. The spread of the Covid 19 virus, the reduction of random parking, the resulting obstruction of traffic, and the occurrence of congestion on the roads, embodying the Sharjah Police vision consistent with the strategic goal of the Ministry of Interior aimed at making roads safer; Where it was decided that security inspection teams will be present intensively, to monitor full compliance with precautionary and preventive measures, and to emphasize wearing masks, applying physical distancing and other measures and other steps that affect the safety and health of society.

As for the open Eid prayer halls, it will be in accordance with the directives that will be issued later by the competent authorities in the country and will be applied in time according to the developments that will arise in this regard.

Inter – Verona: The top favorite Inter to take the match