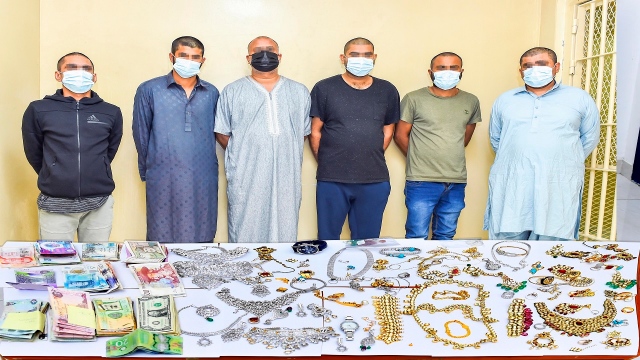 The Criminal Investigation Department of the Sharjah Police General Command managed to control a gang formation consisting of (9) persons of Asian nationality, including a woman, after the arrest of the first accused (H.G.M.) of them, based on the report of the theft of various gold jewelry And money in different currencies, equivalent to more than 415 thousand dirhams, from a house in Sharjah, and the investigations that took place after his arrest revealed the rest of the gang members, as they all confessed after their arrest of the details of their different roles in the case.

Regarding this case, Colonel Omar Abu Al-Zoud, Director of the Criminal Investigation Department at Sharjah Police, explained that the department had received a report from the so-called (FJM) Emirati, stating that her home was stolen while she was outside. After her return, the outside door was open, and she also found a net of the window of her room and her mother’s room, where she mentioned that she reported her discovery after entering the house, the theft of various gold jewelry, in addition to a sum of 300 thousand dirhams, in addition to other sums of money from various foreign currencies equal to the total value of 415 One thousand and 675 dirhams, another one and her mother kept them in their rooms.

In light of the submitted report, a team of criminal investigations and investigation officers was formed to carry out search and investigation work and collect the necessary inferences, and accordingly, the characteristics of the perpetrator were determined, which matched the specifications of one of the previous owners, and in the same criminal method that was followed.

Based on these data, the team members were able to arrest the accused inside his home, and after searching and searching his home, sums of money and gold jewelry were found, and by asking about the seizures, he admitted that he had stolen several houses and that these sums and jewelery were the outcome of those thefts, and by confronting him about the theft report that was submitted. With the complainant, he confessed to committing the theft and all that was attributed to him, as he guided about the other (8) accused men and a woman, and after their arrest they all confessed what was attributed to them, and they recognized their different roles in the case, which varied between receiving and disposing of the gold stolen items, and receiving The stolen money was transferred abroad, and after the perpetrators confessed what was attributed to them, they were arrested and referred to the Sharjah Public Prosecution.

Colonel Omar Abu Al-Zoud, Director of the Criminal Investigation Department at Sharjah Police, instructed community members to install surveillance cameras on their homes, given their important role in uncovering crimes and thefts that occur in these homes, especially if their owners are outside, and he urged them to keep their valuable possessions such as gold, jewelry, jewelry and sums. Finance is in safe places, hard to reach, and out of the eyes of the weak.

The funeral of Philippe of Edinburgh: a solemn ceremony, but restricted by the pandemic